(Reuters) – President Barack Obama returned to New York on Thursday for a series of high-end fundraising events, tapping Wall Street donors whose generosity has been strained by U.S. financial reforms that many bankers oppose. 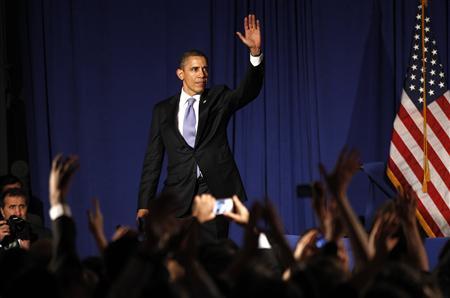 Facing the multimillion-dollar election war chests of his Republican rivals, Obama has raised $136 million so far in the 2012 presidential race, according to the Center for Responsive Politics.

But only $2.3 million has so far come from the securities and investment industry, compared to the $7.13 million that he had raised from these sources by the same point in 2008.

Obama, on his second visit to New York this year, acknowledged he has ruffled feathers in the city since winning the White House in 2008.

“Many of you have had to defend me to your co-workers over the last three years,” he told a group of 80 guests paying $38,500 each to attend an exclusive dinner at the ABC Kitchen, an upscale restaurant near Union Square in Manhattan.

Obama’s financial reforms have taken aim at some bank practices by seeking to curb the sort of excessive risk-taking that contributed to the 2008 financial crisis – a lucrative source of profits before the market soured.

He also wants Congress to close a loophole that allows hedge fund managers to have their income taxed as capital gains, currently pegged at 15 percent, versus a top income tax rate of 35 percent.

On the first of Thursday’s four fundraisers, which will likely raise well over $4 million, Obama told an audience of around 100 paying at least $5,000 each that the recovery was picking up pace.

“Here in the United States the trendlines are good … unemployment is still high but it’s been moving in the right direction,” he told the donors in a soaring, art-covered apartment on the Upper West Side.

Obama’s fundraising is outpacing Republicans through direct channels, but his opponents are comfortably making up the difference through massive ‘Super PAC’ donations by wealthy backers who are free to give as much as they want to such political action committees.

Obama’s Super PAC, Priority USA, had raised $4.2 million by January compared with the $36.8 million raised by Restore Our Future, the Super PAC that backs Mitt Romney, the front-runner to win the Republican nomination to challenge Obama in the November election.

“I’m going to need your help,” Obama told the first fundraiser. “So I hope you are ready, I hope you will be just as determined, just as fired up, just as ready to go as you were in 2008,” he said.

Later, at the elegant penthouse of designer Michael Smith, who gave the White House a makeover after the Obamas moved in in 2009, the president acknowledged public worry over the nation’s finances but said the remedy was not complex.

“Unlike Greece, and even unlike England, our deficits and debt are entirely manageable – if we make some sensible decisions,” he told an audience of around 90 paying upward of $10,000 each that included singer John Legend and top Hollywood moviemaker Harvey Weinstein.