Sterilized by North Carolina, she felt raped once more 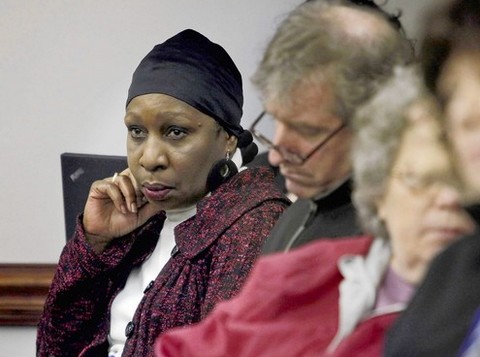 Elaine Riddick, 57, listens as Laura Gerald, chairwoman of the Eugenics Compensation Task Force, announces the panel's recommendation during a meeting on Tuesday, January 10, 2012 in Raleigh, North Carolina. The N.C. governor's task force voted Tuesday to recommend paying $50,000 each to survivors who were sterilized under the state's eugenics program. (Shawn Rocco/Raleigh News & Observer/MCT)

Reporting from Raleigh, N.C.—
Elaine Riddick was a confused and frightened 14-year-old. She was poor and black, the daughter of alcoholic parents in a segregated North Carolina town. And she was pregnant after being raped by a man from her neighborhood.

Riddick’s miserable circumstances attracted the attention of social workers, who referred her case to the state’s Eugenics Board. In an office building in Raleigh, five men met to consider her fate — among them the state health director and a lawyer from the attorney general’s office.

Board members concluded that the girl was “feebleminded” and doomed to “promiscuity.” They recommended sterilization. Riddick’s illiterate grandmother, Maggie Woodard, known as “Miss Peaches,” marked an “X” on a consent form.

Hours after Riddick gave birth to a son in Edenton, N.C., on March 5, 1968, a doctor sliced through her fallopian tubes and cauterized them.

“They butchered me like a hog,” recalls Riddick, now a poised and determined woman of 57.

Nearly 44 years later, the state of North Carolina has proposed paying $50,000 each to compensate Riddick and other victims of its eugenics program. It’s the first state to consider compensation for victims of forced sterilization — up to 65,000 in at least 30 states, according to most estimates.

The board’s declared goal was to purify the state’s population by weeding out the mentally ill, diseased, feebleminded and others deemed undesirable.

In a 1950 pamphlet, the Human Betterment League of North Carolina said the board was protecting “the children of future generations and the community at large,” adding that “you wouldn’t expect a moron to run a train or a feebleminded woman to teach school.”

The pamphlet went on: “It is not barnyard castration!”

Riddick has endured a lifetime of humiliation and regret. She can barely control her outrage when she discusses what the state did to her — and what the state proposes by way of compensation and apology.

The $50,000 compensation recommended by the Governor’s Eugenics Compensation Task Force on Jan. 10 must be approved by the state Legislature. If so, Riddick said, she will refuse it.

She pauses, then says: “Am I still bitter? Of course I’m still bitter. The state wants me to lie down like a dog and just take it.”

The traumatic events of 1968 have shaped and driven Riddick’s adult life.

Dirt poor and pregnant, she dropped out of the eighth grade. After she gave birth, her son was put in her grandmother’s care, and Riddick was sent to live with an aunt in New York.

At 18, she married a man she met there. When he discovered she had been sterilized, Riddick says, he abused her, calling her barren and useless. They later divorced.

Riddick struggled for years to shed the “feebleminded” label stamped on her public health records. She earned a high school equivalency and a degree in human services from a technical school in New York. For years, she was an office manager for a tax preparation company.

She traveled regularly to North Carolina to visit her son, Tony, and the boy went to New York every summer to spend time with his mother.

Related:  For election favor, Obama looks to Merkel, again
Powered by Inline Related Posts
But the stigma of her forced sterilization still clings to her. Now remarried and living in Atlanta, she dreads returning home to Perquimans County in eastern North Carolina, where everyone knows the details of her wrecked childhood.

“What must they think, reading what the state wrote about me?” she asks.

Riddick was 19 when she discovered, during a medical examination, what had happened to her. She was devastated, for she had always intended to have several children.

Outraged, she contacted the American Civil Liberties Union in North Carolina, which filed a lawsuit on her behalf in 1974. The suit accused the Eugenics Board, social workers and the local hospital of unlawfully depriving Riddick of her right to bear children.

Riddick became one of the state’s first sterilization victims to go public. “Nobody knows the pain and humiliation I had to go through,” she says.

Her pain deepened as the case dragged on. In 1983, a jury ruled in favor of the defendants. The following year, the U.S. Supreme Court refused to hear Riddick’s appeal.

In June, Riddick testified before the task force. A petite figure with close-cropped hair, she bent before a microphone, struggling to hold back tears as her son comforted her.

“I am not feebleminded — I have never been feebleminded,” she told the task force. “They slandered me,” she said of the Eugenics Board, which put her IQ at 75. “They ridiculed me and they harassed me.”

A social worker threatened to take away her grandmother’s state food rations if she did not sign the consent form, Riddick says.

Tony Riddick, now 43 and an entrepreneur in the eastern North Carolina county where he was born, says what the state did to his mother is a crime. “This is not sterilization,” he told the task force in December. “This is genocide.”

In a recent interview, Tony Riddick said he supported his mother’s intention to refuse $50,000 in compensation.

North Carolina is one of about half a dozen states to acknowledge or apologize for sterilizations.

Dr. Laura Gerald, a pediatrician who heads the eugenics task force, said the five-person body sought to strike “a fair balance” between victims’ rights and political realities when it approved the $50,000 figure on a 3-2 vote. (Two members voted for a $20,000 payment.)

Several victims requested $1 million in compensation, Gerald said in an interview. “On the other hand,” she said, “there has been little political will for anything other than an apology.”

Then-Gov. Mike Easley issued a one-sentence apology in 2002. He called sterilization a “regrettable episode” and assured victims that “we will not forget what they have endured.”

Elaine Riddick says no apology can erase the fact that the Eugenics Board treated a 14-year-old rape victim like a criminal. She says she was provided no explanation and no follow-up care.

“Because of Elaine’s inability to control herself, and her promiscuity — there are community reports of her ‘running around’ and out late at night unchaperoned — the physician has advised sterilization,” the board reported, according to minutes unearthed by the Winston-Salem Journal in 2002.

The board went on: “This will at least prevent additional children from being born to this child who cannot care for herself, and can never function in any way as a parent.”

The words still stab at Riddick. “I was just a child who was raped,” she says, “and then the state raped me all over again.”

Sterilized by North Carolina, she felt raped once more