President Barack Obama has said the credibility of the US, its Congress and the international community is on the line over their response to Syria’s alleged use of chemical weapons.

Speaking in Sweden, he said the world should stick to its own “red line” against the use of chemical weapons.

Mr Obama is trying to build support in the US for punitive military action against the Syrian government.

Congress will vote next week on whether to support his plans.

France – whose government has strongly advocated intervention – is holding an extraordinary debate in the National Assembly, though MPs will not vote on the matter as the president can mobilise the military without their backing.

Prime Minister Jean-Marc Ayrault said it was France’s duty to act and that “faced with barbarism, doing nothing is not an option”.

Inaction would “put peace and security in the entire region in danger”, he said, and “close the door on a political solution” to the conflict.

Jordan’s Prime Minister Abdullah Ensour told the BBC that it would back intervention in neighbouring Syria if proof emerged that chemical weapons had been used.

But he said any strikes would have to be precise, and that Jordan itself would not be involved.

The government of Syrian President Bashar al-Assad is accused of using chemical weapons against civilians on several occasions during the 30-month conflict, most recently on a large scale in an attack on 21 August on the outskirts of Damascus.

The US has put the death toll from that incident at 1,429 – though other countries and organisations have given lower figures – and says all the evidence implicates government forces.

President Assad has said such an attack would have been “illogical” because UN chemical weapons experts were visiting Damascus at the time.

Mr Obama has said the evidence gives him “high confidence that Assad carried this out” and that action must be taken to deter the regime from using chemical weapons again and degrade its ability to do so.

On Tuesday, senior members of the Senate Committee on Foreign Relations agreed a draft resolution on military action to go before Congress, specifying that any operation would be “limited and tailored” and prohibit the use of ground forces.

The full committee may vote on the draft on Wednesday.

Mr Obama has won the support of key Congressional leaders, though influential Republican John McCain said there were “number of people who are unhappy”.

However those numbers are expected to shift as the language in the resolution changes, the White House and their congressional allies apply pressure, and lawmakers hear from their constituents.

In Stockholm, Mr Obama said he did not believe he had risked his credibility by asking Congress to vote – something he was not constitutionally obliged to do.

“America and Congress’s credibility is on the line, because we give lip-service to the notion that these international norms are important.”

“Congress set a red line when it ratified that treaty,” he added.

He said he believed Congress would approve intervention, but stressed that as commander-in-chief, he had the right to act in his country’s national interest regardless.

President Vladimir Putin warned on Wednesday that any strike without UN approval would be “an aggression”.

But he said Russia did not rule out supporting a UN Security Council resolution authorising force, if it was proved “beyond doubt” that the Syrian government had used chemical weapons.

In Syria, Deputy Foreign Minister said Damascus had “take every measure to retaliate” against an attack.

He told the AFP news agency: “The Syrian government will not change position even if there is World War III.”

The opposition Syrian National Coalition movement told Reuters that Mr Habib had fled to Turkey, but the Alikhbaria news channel said he was still at his home.

The United Nations says more than 100,000 people have been killed since the uprising against President Assad began in March 2011.

On Tuesday, the UN’s refugee agency said more than two million Syrians were now registered as refugees, and an estimated 4.25 million had been displaced within Syria, making it the worst refugee crisis since the 1994 genocide in Rwanda.

At a meeting at the UN in Geneva on Wednesday, the foreign ministers of Lebanon, Jordan, Turkey and Iraq – which border Syria – called for more international support to help them handle the huge numbers arriving in their countries.

They are expected to ask for funding and in some cases, for help resettling some refugees in other countries, possibly in Europe. 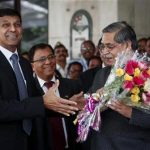 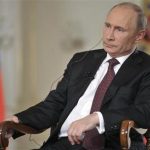 Mexico probes if blast was attack or accident, 33 dead 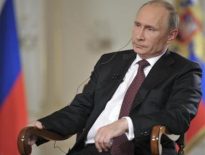 Europe Putin ‘does not rule out’ approving Sy… 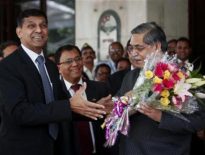 Asia Indian rupee in sharp rebound on suspected heavy i…