(Reuters) – An ex-school bus driver accused in the abduction ordeal of three young Ohio women was due in court on Thursday to face charges he kidnapped and raped the victims, who authorities said were held captive in the dungeon-like confines of his house for 10 years.

As two of the women received jubilant homecomings from loved ones on Wednesday and the third remained in hospital, authorities in Cleveland disclosed details of the isolation and brutal treatment the captives endured before they were freed earlier this week.

Officials said the three women were at times bound in chains or rope and endured starvation, beatings, sexual assaults and in the case of one of them, several miscarriages deliberately induced by their captor.

Their imprisonment came to an end on Monday after neighbors, drawn to the house by cries for help, broke through a door to rescue Amanda Berry, whose disappearance in 2003 the day before her 17th birthday was widely publicized in the local media.

The recording of her frantic emergency-911 call that evening, declaring, “I’ve been kidnapped and I’ve been missing for 10 years and I’m here. I’m free now,” has been replayed countless times on television news broadcasts around the world.

Their accused abductor and tormentor, Ariel Castro, 52, who was fired from his job driving school buses last fall, was formally charged on Wednesday with kidnapping and raping the women. He was scheduled to be arraigned in court on Thursday morning, prosecutors said.

His two brothers, Pedro Castro, 54, and Onil Castro, 50, were initially arrested as suspects in the case but were not charged after investigators determined they had no knowledge of the abductions or captivity of the women, police said.

However, the two brothers also were slated to appear in court on Thursday on unrelated outstanding misdemeanor warrants.

Berry told police that her escape on Monday marked her first chance to break free in the 10 years that she was imprisoned, an opportunity occasioned by Castro’s momentary absence.

It also became clear that Berry’s pregnancy with her daughter was not an isolated incident, according to Cleveland City Councilman Brian Cummins, who based his information on a police report from the initial investigation and briefing by police department sources.

Cummins said one of the three women – he did not know who – had suffered at least five miscarriages that Castro is accused of having intentionally caused by starving her for weeks and beating her in the abdomen.

Berry’s baby was born in a plastic inflatable kiddy pool on Christmas Day, 2006, authorities said. A paternity test will be conducted to determine the girl’s father.

All three women were held in the home’s basement for long periods, restrained with ropes and chains and occasionally starved, according to Cummins. Authorities have described the condition of the home as squalid.

Cummins said the victims were kept apart in the house until their captor at some point gained sufficient confidence in his control over them to allow them to mingle. While separated in the house, the three women were isolated in different rooms but were aware of the others’ presence, police said.

Authorities said the women recalled leaving the confines of the house just twice during their captivity, ushered on both occasions into a separate garage on the small lot while disguised in wigs and hats.

The women also told police their abductions occurred when Castro offered them rides and they accepted, authorities said.

Cummins said much of their ordeal was recounted by the women as soon as they were freed.

“En route to the hospital there was just a flood of information shared by these victims immediately,” he said. “One can only imagine the mental distress and eruptions of joy and emotions.”

On Wednesday, after spending a day in seclusion following their hospital evaluations, Berry and DeJesus were each glimpsed by television cameras being whisked to celebrations with family members – Berry and her daughter at her sister’s house and DeJesus at her mother’s home.

Neither Berry, who was last seen leaving her job at a fast-food restaurant, nor DeJesus, who vanished while walking home from school, spoke publicly.

But DeJesus, clenched in a tight embrace by her sister Mayra and hiding her face in a yellow hooded sweat-shirt, raised her hand in a thumbs-up sign to spectators chanting “Gina, Gina.”

Knight remained in a Cleveland hospital, where she was listed in good condition.

Castro, owner of the modest, two-story house, had been thought by neighbors to live there alone.

Questions have mounted since the three women were freed as to how their captivity escaped notice for so long, despite what neighbors said were a number of suspicious incidents at the house in the low-income community of Cleveland’s West Side.

Investigators took some 200 pieces of evidence from his house but found no human remains on the site. Police were still searching a second house. 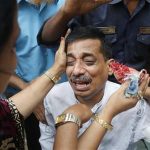 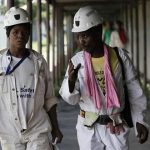 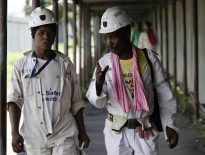 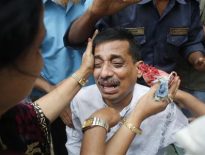