Each spring, a gala serves as the opening of the annual blockbuster show at the Metropolitan Museum’s Costume Institute. Hundreds of celebrities arrive in a frantic seasonal migration for that party.

This year, that exhibition is Heavenly Bodies: Fashion and the Catholic Imagination — and the choice of a religious theme gave a number of gala attendees a hot chance to tee off to the line of reporters on the event’s packed red carpet on Monday night.

I’m a pagan, said the actress Frances McDormand. Aren’t you?

This is like my skin, I’m proud to be in it, said Lena Waithe, the actress and writer, who was regally dressed in a black suit and cape that became a broad rainbow. I’ve got the community on my back to make sure they know I’ve got them all the time.

The theme to me is like be yourself, Ms. Waithe said. You were made in God’s image, right?

Not every outfit was political. I’m the back wall of the Sistine Chapel, said Ariana Grande, the singer, whose dress was a mass of papal conclave color. I feel fairly important in this outfit, I have to say.

Building a relationship with the Catholic Church took significant work by the Costume Institute curator Andrew Bolton. Eventually, the church lent more than 40 items to the exhibition, which encompasses an enormous 58,600 square feet and extends to the Cloisters. A papal tiara, with 18,000 diamonds, was flown to New York with a bodyguard.

The Met Gala may be the world’s fanciest party. The ceremonial red carpet procession was to be followed by cocktails, then dinner (lobster with gold flakes was on the menu), then a dessert buffet. President Trump proposed to his wife, Melania, there in 2004. Tickets are $30,000, but you can’t just buy one — Anna Wintour, the artistic director of Condé Nast who is one of the chairwomen, approves attendees.

And its red carpet entrance is one of the premier showcases of celebrity brands, for musicians, actors and fashion folks alike.

This carpet is one of the most important carpets of the year, the model Bella Hadid said.

We based the dress on a tapestry from the Cloisters museum, Ms. Rockefeller said. And of course my great-grandfather John D. Rockefeller Jr. founded the museum, so we really wanted to incorporate family history as well as honor the theme tonight.

Unlike in the Crusades themselves, there was very little blood shed this evening. They had to sew me in on the way here, said Olivia Munn, who was bleeding very slightly. Her dress was inspired by Crusade-era chain mail, by H&M. 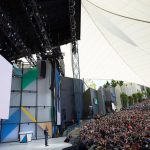 How to watch the Google I/O 2018 keynote 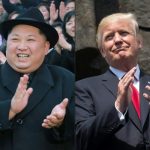 49ers finally get chance to add to glory years

With pop, performance and pride, London extinguishes Olympic flame and passes the torch to Rio

At Met Gala, Rihanna and Lena Waithe Dress for a Future-Era Church 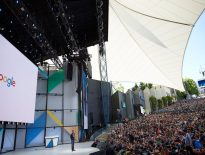 Internet How to watch the Google I/O 2018 keynote