We preferred her trashy days

Her style credentials have gone down the pan ever since she started taking fashion advice from Kanye West, stepping out in a less than flattering monochrome ensemble as she touched down in LAX Airport last night.

The reality TV star is famed for showing off her voluptuous curves in skintight dresses along with plunging necklines and short hemlines, but ever since the rapper-turned-designer became a prominent figure in her life, she’s lost her shape in all of his ill-advised garms.

Kim was spotted arriving at Los Angeles’ LAX Airport in another – shock horror – monochrome loose-fitting knitt dress which swallowed up her dangerous curves and featured an optical illusion design which failed to do its job, making the TV star’s waist look twice the size it actually is.

The baggy shift dress further swamped Kimmy’s diminutive height as she walked through the airport, teaming the look with a monstrous pair of black Givenchy shark lock $1,695 boots which she also has in cream, and features chaps-style covers. Eek, what is happening to your style, Kim? We preferred your trashy days!

And there’s no doubt that Kanye has had some input into this disastrous monochrome number as he eschews all colour in clothing and was seen binning Kim’s clothes in a recent episode of Keeping Up With The Kardashians.

If this should teach anything, it’s to never take style advice from your boyfriend, even if he has got a shoe collection up at Paris Fashion Week. 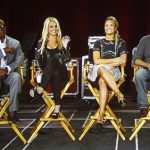 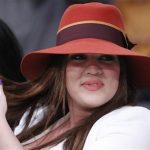 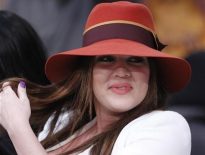 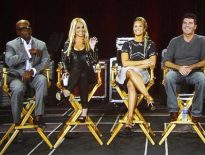