(Reuters) – Three women from the Russian punk band Pussy Riot were sentenced to two years in jail on Friday for staging a protest against President Vladimir Putin in a church, a ruling supporters described as his “personal revenge”. 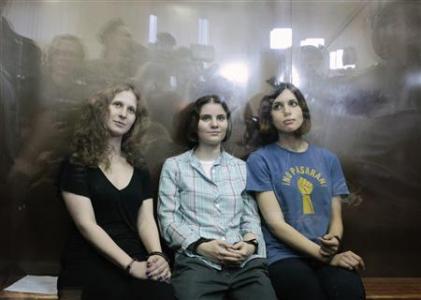 The group’s backers burst into chants of “Shame” outside the Moscow courthouse and said the case showed Putin was cracking down on dissent in his new six-year term as president. Dozens were detained by police when scuffles broke out.

The United States and the European Union condemned the sentence as disproportionate and asked for it to be reviewed, although state prosecutors had demanded a three-year jail term and the maximum sentence possible was seven years.

But while the women have support abroad, where their case has been taken up by a long list of celebrities including Madonna, Paul McCartney and Sting, opinion polls show few Russians sympathize with them.

“The girls’ actions were sacrilegious, blasphemous and broke the church’s rules,” Judge Marina Syrova told the court as she spent three hours reading the verdict while the women stood watching in handcuffs inside a glass courtroom cage.

She declared all three guilty of hooliganism motivated by religious hatred, saying they had deliberately offended Russian Orthodox believers by storming the altar of Moscow’s main cathedral in February to belt out a “punk prayer” deriding Putin.

Nadezhda Tolokonnikova, 22, Marina Alyokhina, 24, and Yekaterina Samutsevich, 30, giggled as the judge read out the sentences one by one, but portrayed themselves as victims of Soviet-style persecution during the trial that began on July 30.

They have already been in jail for about five months, meaning they will serve another 19, and could be released if Putin were to pardon them. The Orthodox Church hinted it would not oppose such a move by appealing, belatedly, for mercy.

Pussy Riot took on two powerful state institutions at once when they burst into Moscow’s golden-domed Christ the Saviour Cathedral wearing bright ski masks, tights and short skirts to protest against Putin’s close ties with the Church.

The judge said the three women had “committed an act of hooliganism, a gross violation of public order showing obvious disrespect for society.” She rejected their argument that they had no intention of offending Russian Orthodox believers.

It became one of Russia’s most high-profile trials since the Soviet Union collapsed in 1991 and Putin’s critics said it put the 59-year-old Kremlin leader’s policies in the dock.

Opponents depicted it as part of a crackdown by the ex-KGB spy against a protest movement that took off over the winter, attracting what witnesses said were crowds of up to 100,000 people in Moscow to oppose his return to power.

“They are in jail because it is Putin’s personal revenge,” Alexei Navalny, one of the organizers of the protests, said outside the court. “This verdict was written by Vladimir Putin.”

A police source told Itar-Tass news agency 50 people had been detained near the court when scuffles broke out. Among them were Sergei Udaltsov, a leftist opposition leader, and Garry Kasparov, a Putin critic and former world chess champion.

But there was no sign of the opposition taking to the streets in anger. Opposition leaders plan a small gathering in Moscow on Sunday, the anniversary of a failed coup shortly before the Soviet Union fell in 1991, but the next big anti-Putin rally is not planned until September 15.

Putin’s spokesman did not immediately comment on the verdict but the president’s supporters said before the trial that he would have no influence on the court’s decision.

Although Pussy Riot have never made a record or had a hit song, foreign singers have led the campaign for the trio’s release. Madonna performed in Moscow with “PUSSY RIOT” painted on her back and wearing a ski mask in solidarity.

But a poll of Russians released by the independent Levada research group showed only 6 percent sympathized with the women and 51 percent found nothing good about them or felt irritation or hostility. The rest could not say or were indifferent.

Valentina Ivanova, 60, a retired doctor, said outside the courtroom: “What they did showed disrespect towards everything, and towards believers first of all.”

Putin, who returned to the presidency for a third term on May 7 after a four-year spell as prime minister, had said the women did “nothing good” but should not be judged too harshly.

The trio’s defense lawyers said they would appeal. The Church issued a statement condemning the women’s actions but urged the state to show mercy “within the framework of the law”.

That appeared to signal that the Church would back a pardon or reduced sentence, although the women would be expected to admit guilt if they sought a pardon.

U.S. State Department spokeswoman Victoria Nuland said Washington was concerned about the “disproportionate sentences … and the negative impact on freedom of expression in Russia”, and urged Russian authorities “to review this case”.

In protests outside Russia in support of Pussy Riot, a bare-chested feminist activist took a chainsaw to a wooden cross bearing a figure of Christ in Kiev. In Bulgaria, sympathizers put Pussy Riot-style masks on statues at a Soviet Army monument.

Opposition leaders say Putin will not ease up on opponents in his new term. Parliament has already rushed through laws increasing fines for protesters, tightening controls on the Internet, and imposing stricter rules on defamation.

Gay rights suffered a blow in Moscow when an appeals court upheld a ruling rejecting applications from activists to hold a gay rights march each year for the next 100 years. Anti-gay activists later sued Madonna for $10 million in St Petersburg, saying she insulted their feelings by speaking out for gay rights there last week. 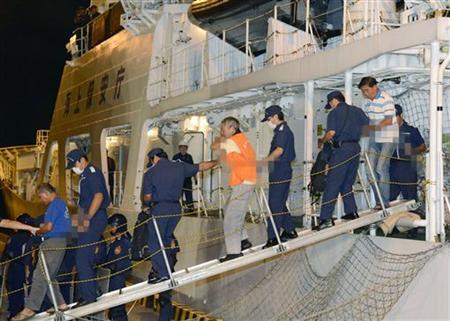 Asia China protests over plans by Japanese group to vis… 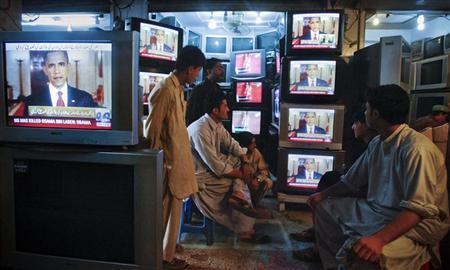