By Chris Buckley and Andrew Quinn

dissident Chen Guangcheng appealed on Thursday for asylum in the United States, throwing into doubt an agreement used to coax

him out of hiding in the U.S. Embassy in Beijing and fanning U.S.-China tensions at a sensitive time. 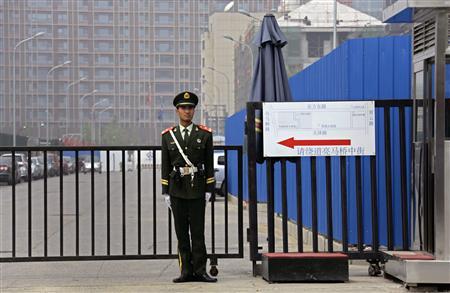 A paramilitary police officer stands guard outside the U.S.

embassy in Beijing April 30, 2012. The United States faces a tense week in China as high-level talks on trade and global hot

particularly troublesome for the Obama administration, with Chen saying he now fears for his and his family’s safety if he

stays in China, as was planned under the deal that Washington called a good outcome for the dissident.

States had handled the issue as “unacceptable”.

and is now under Chinese control in a Beijing hospital. He had taken refuge at the U.S. mission for six days after escaping

house arrest and left after U.S. officials assured him that Beijing had promised to improve his circumstances.

Chen said on Thursday by telephone from hospital, where he was escorted by U.S. officials and was being treated for a broken

foot, that he had changed his mind after speaking to his wife who spoke of recent threats made against his family.

feel very unsafe. My rights and safety cannot be assured here,” he said. His family, who were with him at the hospital,

backed his decision to try to reach the United States, he added.

The activist, citing descriptions from his wife, Yuan

Weijing, said his family had been surrounded by Chinese officials who menaced them and filled the family home. Chen, from a

“When I was inside the American Embassy, I didn’t have my

family, and so I didn’t understand some things. After I was able to meet them, my ideas changed.”

“When we feel that we have a clear view of what his final decision is, we will do what we can to

help him achieve that,” the official said.

The timing of the Chen case comes at a fragile time for both nations: U.S.

election and China is struggling to push through its own leadership change late this year.

after he was caught up in a scandal linked to the apparent murder of a British businessman.

Hillary Clinton found herself in the eye of the diplomatic storm on Thursday, turning up for the opening of annual bilateral

talks in Beijing which have been overshadowed, but not derailed, by the Chen case.

She used the occasion to urge China

to protect human rights but made no specific mention of Chen, whom she had spoken to on Wednesday after he left the

“Of course, as part of our dialogue, the United States raises the importance of human rights and fundamental

freedoms,” Clinton said. “We believe all governments have to answer our citizens’ aspirations for dignity and the rule of

law and that no nation can or should deny those rights.”

Despite Chen’s change of heart about staying in China, it

was unclear if he would be able to travel to the United States.

U.S. officials appeared no longer to be with him on

Thursday, with the dissident saying he had still not had an opportunity to explain his change of heart to the U.S.

“I hope the U.S. will help me leave immediately. I want to go there for medical treatment,” Chen said from the

hospital, where a pack of camera crews and reporters was waiting outside, kept away from the entrance by

crisis, with both Clinton and U.S. Treasury Secretary Timothy Geithner in the Chinese capital for this week’s talks – in

Under the deal, according to U.S. officials, Chen and his family would have been relocated

within the country in safety and he would have been allowed to pursue his studies.

But Chinese authorities have taken

a tough tone, criticising what they called U.S. meddling and demanding an apology for the way U.S. diplomats handled the

Chinese President Hu Jintao made no mention of the Chen case in his remarks to the U.S.-China talks but stressed

that the two nations needed trust.

“It is impossible for China and the United States to see eye-to-eye on every issue,

but both sides must know how to respect each other,” he said.

Earlier, in comments aired on CNN, Chen said: “I would

like to say to President Obama, please do everything you can to get our family out.”

40, is a legal activist who campaigned against forced abortions under China’s “one-child” policy. He escaped 19 months of

house arrest, during which he and his family faced beatings and threats, late last month.

left the embassy of his own free will because he wanted to be reunited with his wife and children. They said he wanted to

remain in China and never asked for asylum.

U.S. Embassy have made him a symbol of resistance to China’s shackles on dissent, and the deal struck by Beijing and

Washington would have kept him an international test case of how tight or loose those restrictions remain.

however, his change of mind throws not only his own future into doubt, but also raises questions about the wider U.S.-China

It could also prove politically costly for Obama, who has already been accused of being soft on China by 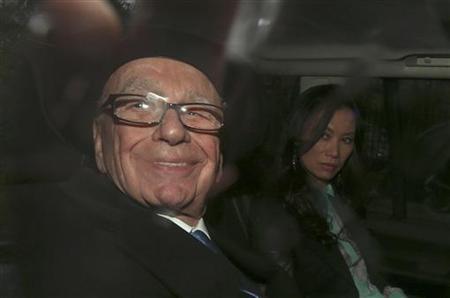 News News Corp board comes out in support of Murdoch… 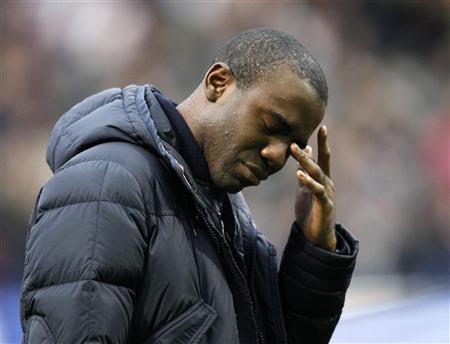 Football I’d rather be playing than watching, says …
Wildcard SSL