Five years ago, an Indian schoolboy struck up an unlikely friendship with a retired teacher in London – and with her help he is now studying to be a doctor. Even though they live thousands of miles apart and have never met, they can’t imagine life without each other.

When Shahrukh Khan was 13, his school in Hyderabad got a new computer lab, and it changed his life.

He and his fellow pupils would get together in a small room to explore the internet but they also had a chance to chat with retired teachers in other countries.

It was part of a new scheme that linked pupils with foreign mentors – the children could ask whatever they wanted and the adults on the other side of the world would offer encouragement and advice on where to find the answers to their questions.

It was interesting to talk with foreigners and learn something, says Khan. I used to sit there and watch everything and talk with people, like Liz Fewings from London.

Fewings was 60 and had just retired from teaching. She lives in Hackney, east London and joined the project in 2009, after reading about it in a newspaper.

It just ticked all the boxes for me, she says. I missed chatting to children.

In the beginning, Fewings would talk to a whole group of Indian pupils but after a while Khan was the only one taking part. And so we developed a friendship, she says.

They started to email each other and she began to help him with his English. His comprehension skills were not good so I would challenge him quite a lot – did you understand what I said? What did I mean?

I’ve got a very different viewpoint to the one that he has been exposed to so we’d laugh a bit – I tease him a little bit and he teases me – he knows if I write in capital letters that I’m shouting.

Khan made the most of his new friendship. His English improved in leaps and bounds.

As the years passed, Khan told Fewings that he wanted to become a doctor and planned to apply to university in the UK.

Khan’s father had died when he was just six – his eldest brother supported the family and paid his school fees but could not give him advice about applying to foreign universities.

I didn’t know anything about abroad – the culture and everything, Khan says. After talking with her I got a clear picture of people’s lifestyle in London.

Fewings did some research to find out how much it would cost, how he could apply and how to avoid scams.

He was sending me flyers on the internet for colleges in Cambridge and then actually when you looked at it, it was a PO Box in a little village somewhere, she says.

He would also send her details of get rich quick schemes which Fewings could immediately see were cons. I think what I have done is help him see that the world isn’t very straightforward and there are people out to get you and you have to be very discriminating, she says.

With Fewings’ help, Khan decided that studying in England would be more expensive and more complicated than he had anticipated.

He considered other countries and looked at universities in Ukraine, Russia, China and the Philippines. Fewings prompted him to think about cultural differences, the climate and living conditions in each place.

There was a university in China… in the Gobi desert. So I looked up what the temperature would be in the Gobi desert [often freezing] and said, ‘You live in Hyderabad why wear lots of clothes? Just think about it,’ she says.

After much discussion, he settled on the Philippines where he is about to start a medical degree.

Khan is just one of thousands of children who have benefitted from the project, the seeds of which were sown 15 years ago, when academic Sugata Mitra gave children in a Delhi slum free access to a computer and let them use it however they wished. He called the experiment the Hole in the Wall.
He wanted to see if the children could teach themselves to operate it without any instruction and was amazed how quickly they gathered round the screen and worked together to pick up new concepts. I began to suspect that reading in groups is different from reading individually, he says.

Mitra saw that children can go well over 10 or 12 years ahead of their time using this kind of method.

The project provided the inspiration for the book Q&A, which in turn inspired the Oscar-winning movie Slumdog Millionaire.

Last year, Mitra won a $1m (£650,000) prize from the organisers of the Technology Entertainment and Design (TED) conference – he’s using the money to fund the next phase, which is known as the School in the Cloud.

This is a network of seven new centres for self-organised learning – basic cybercafes for children where every computer screen is visible to anyone nearby. There is also a large monitor where they can call an electronic mediator, like Fewings, for help.

Three of the new labs are in the east of India – the ones in Korakati and Chandrakona in West Bengal are in particularly remotes areas where children’s access to education is currently very limited.

But the focus is not just on India – Professor Mitra has opened two computer labs in the UK, in Killingworth and Newton-Aycliffe in north-east England.

The students there also have access to mentors who are known as Cloud Grannies – although many, like Fewings, are not actually grandmothers.

The name comes from the idea that they behave like a proud grandparent – offering encouragement and guidance rather than teaching.

You need to say ‘wow that’s years ahead of your time – how on earth did you guys do that?’ says Mitra.

There are about 50 Cloud Grannies actively involved and another 50 available to help when demand grows.

Having spent much of her life in the classroom, Fewings thinks self-organised learning could help children develop problem-solving skills. There needs to be a way of doing that so children aren’t sitting in rows learning facts, [but] working collaboratively and helping each other along.

But it isn’t just the children who benefit – Fewings now sees herself as a kind of auntie to Khan. To have this relationship with somebody in India is quite exciting really for me… he has a good heart this boy, she says.

As for Khan, he says he never feels alone. If I have any problem there is someone to help. 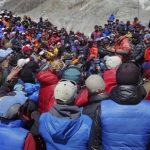 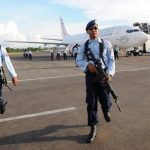 Education: School in the cloud: Children with mentors on the other side of the world 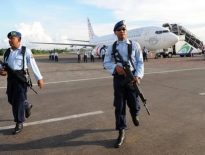 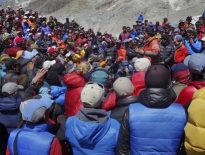