(Reuters) – The European Union will receive the 2012 Nobel Peace Prize at a ceremony in Oslo on Monday, honored by the Norwegian committee for bringing decades of peace and democracy to Europe after the horrors and division of two world wars.

Looking beyond the current, deep malaise Europe finds itself in with slumping growth, soaring unemployment and countries unable to pay their debts, the Nobel committee has instead focused on what the EU has done over the past 60 years to reconcile the disparate, warring corners of the ‘old continent’.

From just six countries who agreed to pool their coal and steel production in the 1950s to 27 member states today – and 28 once Croatia joins next year – the EU now stretches from Portugal to Romania, Finland to Malta and sets rules and regulations that have a bearing on more than 500 million people.

“The stabilizing part played by the EU has helped to transform most of Europe from a continent of war to a continent of peace,” the Nobel committee said on October 12 when it announced the EU had won, an unexpected decision.

“The division between East and West has to a large extent been brought to an end; democracy has been strengthened; many ethnically based national conflicts have been settled.”

Moments after being announced as the winner, the EU and its institutions were at odds over who should receive the prize and who the Nobel trustees were specifically honoring.

In the end it was decided that the award was for all Europeans, but it will be picked up by the heads of the EU’s three main institutions.

Four young Europeans, including a 12-year-old Spanish girl and a 21-year-old woman from Poland, will also attend the ceremony after winning competitions, and 20 EU heads of state and government have also flown in for the high-profile occasion.

The prize money of 930,000 euros ($1.25 million) will be given to projects that help children struggling in war zones, with the recipients to be announced next week. The EU has said it will match the prize money, so that a total of 2 million euros will be given to the selected aid projects.

That decision went some way to silence critics on Twitter and other social media sites who initially joked that if the award was for all Europeans then they should all share the prize money – which would equal about 0.2 euro cents each.

Commentators on social media haven’t been the only critics of the award going to the EU, which for the past three years has been a virtual byword for disorder and indecision because of its failure to get on top of a sovereign debt crisis.

Former Nobel laureate Desmond Tutu said last week that the EU did not deserve the award, and on Sunday around 1,000 members of left-wing and human-rights groups marched through the streets of Oslo in protest, saying the EU was not a rightful beneficiary under the terms Alfred Nobel laid down in his will in 1895.

“Alfred Nobel said that the prize should be given to those who worked for disarmament,” said Elsa-Britt Enger, 70, a representative of Grandmothers for Peace. “The EU doesn’t do that. It is one of the biggest weapons producers in the world.”

For many people inside and outside of Europe, it is hard to get beyond the sense of the EU as an organization stumbling from one crisis to another while meddling in member states’ sovereignty.

In their acceptance speech on Monday, Van Rompuy and Barroso will be hoping to overturn those impressions by invoking the despair and misery produced by World War Two and emphasizing what Europe and its institutions have done in the decades since to prevent trading partners going to war with each other.

“This Nobel prize is a recognition of our union’s achievements as a peacemaker and a tribute to the work of generations of Europeans,” Van Rompuy said in a statement. 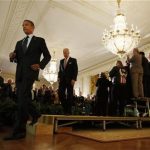 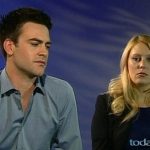 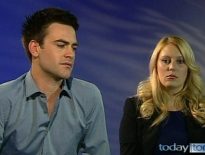 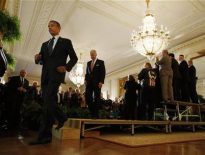