Kim’s sister, Kim Yo Jong, delivered the invitation during her visit to the Winter Olympics.

Any meeting would represent a diplomatic coup for Moon, who swept to power last year on a policy of engaging more with the reclusive North.

The recent detente, anchored by South Korea’s hosting of the Winter Olympic Games, came despite an acceleration in the North’s weapons programme last year and pressure from Seoul’s allies in Washington.

The invitation came during talks and a lunch Moon hosted with Kim Yo Jong, the younger sister of the North Korean leader, at the presidential Blue House in Seoul.

Kim Jong Un wanted to meet Moon at an early date, a spokesman for the Blue House said. Moon had said let’s create conditions to make it happen, the official said, an indication that Moon was likely to accept the invitation.

Kim Yo Jong arrived in South Korea on Friday with Kim Yong Nam, the North’s nominal head of state, for the opening ceremony of the Winter Olympics in the alpine resort town of Pyeongchang. They shook hands with Moon and cheered for athletes from the two countries who marched under a unified peninsula flag for the first time in a decade.

Some North Korean experts believe tough U.N. sanctions that are cutting off most of the isolated North’s sources of revenue have added pressure on Pyongyang to engage further with Seoul.

I think this overture towards South Korea is partly sanctions-related, and also related to the fact that it’s clear a divergence has developed between Washington and Seoul’s most keenly desired goals in the near term, said Andray Abrahamian, a research fellow at Pacific Forum CSIS in Hawaii.

The North Koreans should understand that for a summit or any kind of serious talks to occur, Moon needs to be able to take something to Washington – something that addresses denuclearisation, he said before the North’s invitation to Moon was announced.

Moon’s desire to engage North Korea was in contrast to his U.S. ally. U.S. Vice President Mike Pence also attended the Games opening ceremony but had no contact with the North Korean delegation.

North and South Korea are technically still at war after their 1950-53 conflict ended in a truce rather than a peace treaty. The United States fought with South Korea and maintains tens of thousands of troops and an ironclad agreement to protect its ally.

North Korea has spent years developing its military, saying it needs to protect itself from U.S. aggression.

Pyongyang conducted its largest nuclear test last year and said it had developed a missile capable of carrying a warhead to the United States. U.S. President Donald Trump and the North Korean leadership traded insults as tensions rose.

Pence said the United States and South Korea were closely aligned in their approach to dealing with North Korea.

I am very confident, as President Trump is, that President Moon will continue to stand strongly with us in our extreme-pressure campaign, Pence told NBC in an interview, maintaining all options were open to deal with the crisis.

Make no mistake about it, the United States of America has viable military options to deal with a nuclear threat from North Korea but, that being said, we hope for a better path, he said. 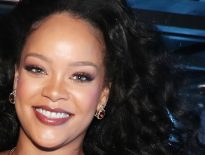 Celebrity Pour It Up! Rihanna Celebrates Grammy Win With Rum… 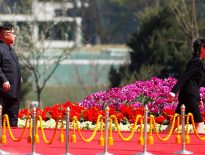