By Loucoumane Coulibaly and David Lewis

ABIDJAN/BAMAKO (Reuters) – Mali’s neighbours threatened on Tuesday to use sanctions and a readiness to use military force to dislodge the army leaders behind last week’s coup, urging them to quickly hand back power to civilian rulers. 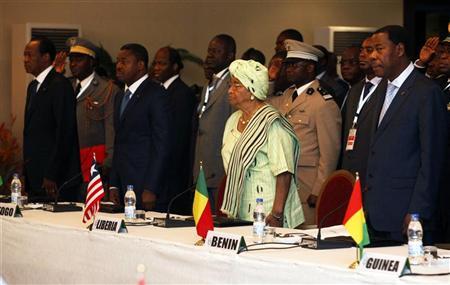 A summit of the West African ECOWAS bloc agreed to send a team of heads of state to confront the putschists in the next 48 hours, a sign of the region’s growing resolve to end the instability that has dogged it for decades.

“Dialogue and concertation will be our primary instruments in the search for a solution but we shall not hesitate to use any other option dictated by circumstances,” said Ivory Coast President Alassane Ouattara, who won a 2010 election but only came to power after a four-month civil war.

“The summit authorises preparations for a force under stand-by for ECOWAS to deal with any eventuality,” a closing summit statement said, which also threatened possible travel bans and financial and diplomatic sanctions on junta members.

The statement did not any include indications of possible army action on the ground and ECOWAS – which does not have its own standing army – would have to go through potentially lengthy processes to raise sufficient troops from member states.

The one-day meeting in the Ivorian economic hub Abidjan suspended Mali from all decision-making bodies of the ECOWAS bloc in a widely expected diplomatic gesture to isolate soldiers behind last Wednesday’s coup.

Aside from Ouattara, a former top IMF official, the delegation has in Johnson-Sirleaf a Nobel Peace laureate, in Issoufou one of Washington’s new regional favourites, and in Compaore, a former coup leader turned regional power broker. Nigeria is the regional military and economic power

Earlier, the French Foreign Ministry said its ambassador in Mali had been in contact with Malian President Amadou Toumani Toure, who gave reassurances he was safe. Toure’s whereabouts are unknown since he fled his palace on Wednesday last week.

Mostly mid-ranking soldiers ousted Toure last Wednesday after a mutiny sparked by soaring frustration in the army over his handling of a Tuareg rebellion in the desert north, where the military has faced a series of setbacks.

The army has complained it lacks the supplies and equipment needed to beat back the rebels, who have been reinforced by fighters and weapons from Libya’s war.

The ECOWAS move is the latest sign of mounting domestic and international pressure to reverse a coup in Africa’s third largest gold miner, a country which was one of the most stable democracies of the region.

“We want them to see that the age of coups is over and this has to be put back in the box,” one diplomat in the region said.

“We want to target the people who are responsible for this, punish them and still not hurt the average Malian.”

Travel bans and asset freezes on specific individuals were used last year in Ivory Coast to put pressure on former leader Laurent Gbagbo to quit after he lost the 2010 election. Gbagbo was ousted with U.N. and French military help in April 2011.

Mali’s neighbours could also make it difficult for the junta to get funds to pay salaries and other financial obligations by restricting its access to the BCEAO central bank that controls the money supply in the West African franc zone, another tactic used against Gbagbo.

“The question over how they will pay the salaries at the end of the month will be key as there is no minister of finance and the secretary general, who is now running the ministry, won’t have the authorised signature with central bank,” a Bamako-based diplomat said, requesting not to be named.