(Reuters) – Nearly 1.4 million homes and businesses in the eastern United States remained without power amid a heat wave on Tuesday, and storm damage forced many Fourth of July celebrations to be canceled. 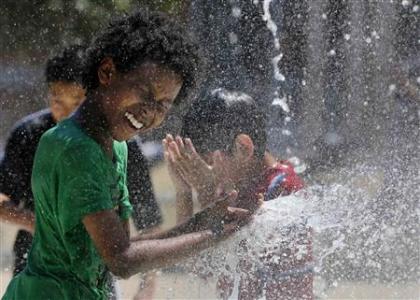 Aziz Taylor, 11 years old, of Washington DC, plays in a water fountain to beat the heat gripping the nation’s capital while in the Capital Heights neighborhood of Washington, July 2, 2012. REUTERS/Larry Downing

Violent weekend storms and days of record heat have killed at least 22 people in the United States since Friday. Some died when trees fell on their homes and cars, and heat stroke killed others.

Utilities warned that some people could be without power – and unable to run their air conditioners – for the rest of the week. More than 1.4 million homes and businesses from Illinois to Virginia remained without electricity on Tuesday morning.

In hard-hit Washington, Mayor Vincent Gray expressed frustration with the slow pace of repairs. Some 19,000 customers of local power company Pepco are still without power and the city is distributing food to people who cannot cook at home.

“We have had power outage after power outage in the District of Columbia. Frankly, the people are just fed up with it. I don’t have any power in my own home,” Gray told CNN.

Thomas Graham, Pepco regional president, defended the utility’s performance, saying three of four customers without power had had it restored.

“We’re working 24/7 as hard as we possibly can, but it was a catastrophic event and our system (was) literally devastated by that storm,” he said.

Utilities have called in crews and equipment from other companies as far away as Canada and Texas as they grapple with outages in the District of Columbia, Virginia, West Virginia, Ohio, Tennessee, Pennsylvania, Maryland, New Jersey, North Carolina, Indiana and Kentucky.

Many Fourth of July celebrations across the region were canceled as local governments grappled with damage from the hurricane-force winds and with high heat and drought conditions that made firework shows hazardous.

Montgomery County, in Washington’s Maryland suburbs, said it needed to focus on cleanup. Springfield, Tennessee, joined a string of cities citing fire risks for calling off its fireworks display, and many Tennessee cities have banned the private use of fireworks.

But one of the biggest U.S. fireworks parties, held on Washington’s National Mall, will go ahead on Wednesday as planned, said Carol Johnson, a National Park Service spokeswoman.

The largest U.S. home and auto insurer, State Farm, said it had received about 29,000 claims from last weekend’s storms, more than three-quarters of them for house damage.

Two of its peers, USAA and Nationwide, said on Monday they had received more than 12,000 claims, with the majority also for homes. The three collectively account for about 16 percent of the U.S. property insurance market.

Temperatures from 90 Fahrenheit (32 Celsius) to more than 100 F (37.7 C) were forecast from the plains to the Atlantic Coast on Tuesday and Wednesday, the Fourth of July holiday.

“Over the next few days much of the eastern third of the country will see a resurgence of the heat experienced last weekend,” U.S. weather forecasters said.

The record books got a brief respite. On Monday, no temperature records were broken after 288 were set nationwide on Sunday, the National Weather Service said.

The upper Midwest could see more severe thunderstorms like the one that ripped down trees and power lines in northern Minnesota, knocked out the phone system in the city of Bemidji and soaked Duluth.

The death toll from the storms and high temperatures climbed to at least 22 with four more heat-related deaths reported in Nashville, Tennessee, Kansas City, Mo., and Virginia.

Much of the devastation to the power grid was blamed on last weekend’s rare “derecho,” a complex of severe thunderstorms that packed hurricane-force straight-line winds from the Midwest to the Atlantic Ocean.

With power lines down across the region, the U.S. government told federal workers in the Washington area they could take unscheduled leave or work from home on Monday and Tuesday.

(Reporting by Tim Ghianni in Nashville, Jane Sutton in Miami, Ben Berkowitz in New York and Ian Simpson and Eric Beech in Washington; Editing by Will Dunham and Cynthia Osterman) 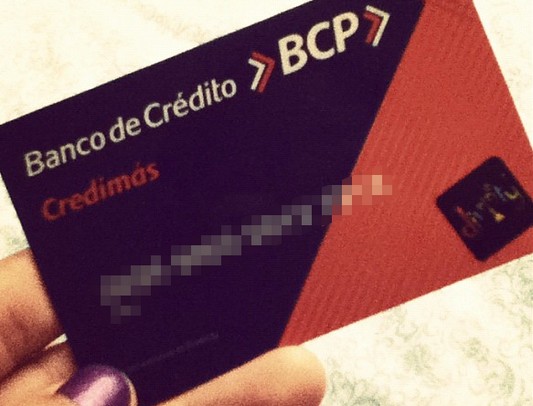 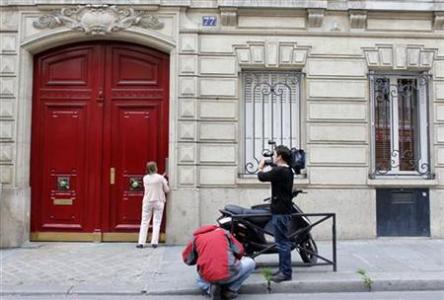