Wearing face masks and standing spaced apart, Americans waited at polling stations early on Tuesday to choose a president on an Election Day marked so far by orderliness and mostly short lines, even as major cities braced for potential unrest.

The masks and boarded-up stores in many city centers were reminders of two of the issues shaping 2020’s polarizing elections, with COVID-19 still ravaging parts of the country after a summer of sometimes violence-marred protests against police brutality and racism.

In New York City, some voting lines snaked around blocks. But in many places lines were short or non-existent, which poll workers guessed was due to an unprecedented wave of early voting, with a record number of ballots cast before Election Day.

In Atlanta, Georgia, about a dozen voters were lined up before sunrise at the Piedmont Park Conservancy. First in line was Ginnie House, shivering in the cold, waiting to cast a vote for the Democratic candidate Joe Biden, a former vice president seeking to replace President Donald Trump, a Republican, in the White House.

I lost my absentee ballot and I’m not going to miss this vote, said House, a 22-year-old actor and creative writing student, who had flown back to Atlanta from New York just for this purpose. Of Trump, she said: He’s dividing our country.

In Hialeah, a predominantly Cuban-American suburb of Miami, Marcos Antonio Valero, 62, was voting for Trump, as he had done in 2016. He said he took the day off from his job as a construction worker to cast his ballot in person because he did not trust voting by mail.

At a polling station in Houston, Texas, Andy Valadez was blowing a shofar, a trumpet used in Jewish and some Christian ceremonies and, in this instance, as a way to pray for a Trump victory, according to Valadez.

We want to pray for a fair election, the 55-year-old marketing executive said, his shofar wrapped in a U.S. flag. We believe in America and want everyone to have a safe voting experience.

TENSIONS FROM TIMES SQUARE TO TEXAS

The American Civil Liberties Union and other civil rights groups said they were watching closely for signs of voter intimidation, and the U.S. Justice Department’s Civil Rights Division said it would deploy staff to 18 states.

Election officials and political party representatives raised worries about a spate of automated phone calls warning voters away from the polls for bogus reasons in Iowa, Pennsylvania, Michigan, and Florida.

Staff at the Lawyers’ Committee for Civil Rights Under Law, a Washington-based advocacy group, told reporters they were concerned about voting machines not working in three counties in Georgia, forcing voters to fill in paper ballots and raising concerns that the paper back-ups would run out.

In North Carolina, one of the most closely watched battleground states, officials said all looked smooth on Tuesday morning, with no long lines.

In some big cities, buildings were boarded up over fears there could be violent protests later. In New York City, the Empire State Building, Macy’s department store, and the skyscraper that houses the Trump-favored Fox News channel were among buildings that were boarded up. On Rodeo Drive, one of the most expensive shopping streets in California’s Beverly Hills, staff had stripped the display windows at Tiffany & Co. and Van Cleef & Arpels of their jewels and luxury stores disappeared behind plywood.

Tensions have flared up around the country in the run-up to Election Day.

Trump supporters driving pick-up trucks down a Texas highway surrounded a bus filled with Biden campaign staff last week. In North Carolina over the weekend, police pepper-sprayed a group of mostly Democrats marching to polling stations. And members of an anti-government militia group have been charged in an alleged plot to kidnap the Democratic governor of Michigan. 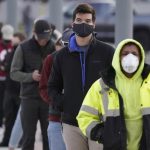 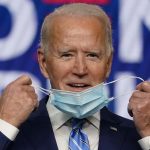 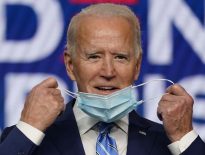 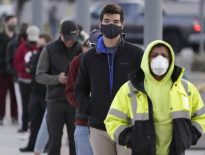