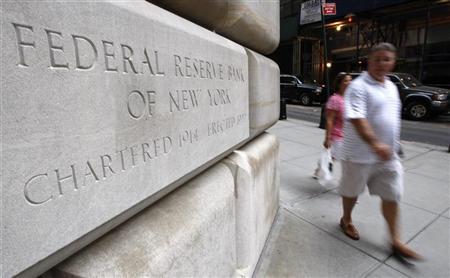 Bo Zhang, 32, of Queens, New York, worked as a contract programmer at the bank. He was accused of illegally copying software to an external hard drive, according to a criminal complaint filed in U.S. district court in Manhattan.

Authorities said the software, owned by the U.S. Treasury Department, cost about $9.5 million to develop.

A New York Fed spokesman said in a statement that the bank immediately investigated the suspected breach when it was uncovered and promptly referred the matter to authorities.

“The New York Fed has further strengthened its already considerable protections as a result of this incident,” the spokesman said.

A federal magistrate judge ordered Zhang released on $200,000 bail after a brief court hearing. He was arrested on Wednesday morning, a federal prosecutor told the judge.

An attorney for Zhang, Joseph Grob, confirmed his client was a Chinese citizen but declined to comment on the charges. Grob told the judge that Zhang holds a job in New Jersey.

Zhang was charged with one count of stealing U.S. government property, which carries a maximum 10 year prison term. He is due back in court on February 17.

The complaint, signed by an FBI agent, said Zhang had admitted to copying the code onto a drive and taking it home.

Zhang told investigators he took the code “for private use and in order to ensure that it was available to him in the event that he lost his job,” the complaint said.

While U.S. intelligence officials have become increasingly worried about economic espionage byChina and Russia, cyber crime experts said the case appeared to be one of simple theft.

“The fact that he was released on bail and charged only with theft is an indication that, at this time, the FBI does not believe that this is connected to international espionage,” said a former law enforcement official, who spoke on condition of anonymity because he was not authorized to speak by his current employer.

Zhang was hired as a contract employee in May by an unnamed technology consulting company used by the Fed to work on its computers, the complaint said.

The code, called the Government-wide Accounting and Reporting Program (GWA), was developed to help track the billions of dollars the United States government transfers daily. The GWA provides federal agencies with a statement of their account balance, the complaint said.

Investigators uncovered the suspected breach only after one of Zhang’s colleagues told a supervisor that Zhang had claimed to have lost a hard drive containing the code, the complaint said.

The case is USA v. Bo Zhang, U.S. District Court for the