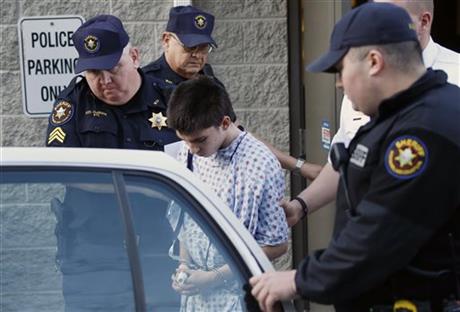 Alex Hribal, center, the suspect in the stabbings at the Franklin Regional High School near Pittsburgh, is taken from a district magistrate after he was arraigned on charges in the attack on Wednesday, April 9, 2014 in Export, Pa. Authorities say Hribal has been charged after allegedly stabbing and slashing at least 19 people, mostly students, in the crowded halls of his suburban Pittsburgh high school Wednesday. (AP Photo/Keith Srakocic)

Alex Hribal, center, the suspect in the stabbings at the Franklin Regional High School near Pittsburgh, is taken from a district magistrate after he was arraigned on charges in the attack on Wednesday, April 9, 2014 in Export, Pa. Authorities say Hribal has been charged after allegedly stabbing and slashing at least 19 people, mostly students, in the crowded halls of his suburban Pittsburgh high school Wednesday. (AP Photo/Keith Srakocic)

MURRYSVILLE, Pa. (AP) — It was just before the start of class and the hallways were packed as usual with students at their lockers or chatting with friends.

Nate Moore was walking to homeroom, book in hand, when a classmate he knew to be quiet and unassuming tackled a freshman boy a few feet in front of him. Moore thought it was the start of a fistfight and went to break it up.

But 16-year-old Alex Hribal wasn’t throwing punches — he was stabbing his victim in the belly, Moore said. The suspect got up and slashed Moore’s face, then took off down the hall, where authorities said he stabbed and slashed other students in an attack that injured 21 students and a security guard — and might have been even worse but for the heroes who Pennsylvania’s governor said helped prevent further injury or loss of life.

An assistant principal tackled and subdued Hribal, who was charged Thursday night with four counts of attempted homicide and 21 counts of aggravated assault and jailed without bail. Authorities said he would be prosecuted as an adult.

The suspect’s motive remained a mystery.

He wasn’t saying anything, Moore recalled hours later. He didn’t have any anger on his face. It was just a blank expression.

At a brief hearing Thursday night, District Attorney John Peck said that after he was taken into custody, Hribal made comments suggesting he wanted to die. Defense attorney Patrick Thomassey described him as a good student who got along with others, and asked for a psychiatric examination.

At least five students were critically wounded in the attack, including a boy who was on a ventilator after a knife pierced his liver, missing his heart and aorta by only millimeters, doctors said.

The rampage comes after decades in which U.S. schools have focused their emergency preparedness on mass shootings, not stabbings.

While knife attacks at schools are not unusual, they’re most often limited to a single victim, said Mo Canady, executive director of the National Association of School Resource Officers.

Nevertheless, there have been at least two major stabbing attacks at U.S. schools over the past year, the first at a community college in Texas last April that wounded at least 14 people, and another, also in Texas, that killed a 17-year-old student and injured three others at a high school last September.

The attack in Pittsburgh unfolded shortly after 7 a.m., a few minutes before the start of classes at 1,200-student Franklin Regional High School, in an upper-middle-class area 15 miles east of Pittsburgh.

Mia Meixner, 16, said the freshman boy who was tackled tried to fight back, then, when his assailant got off him, stood up and lifted his shirt to reveal a midsection covered in blood.

He had his shirt pulled up and he was screaming, ‘Help! Help!’ said another witness, Michael Float, 18. He had a stab wound right at the top right of his stomach, blood pouring down.

As students rushed to the boy’s aid, the attacker slashed Moore before taking off around a bend.

It was really fast. It felt like he hit me with a wet rag because I felt the blood splash on my face. It spurted up on my forehead, said Moore, whose gashed right cheek required 11 stitches.

The boy ran down about 200 feet of hallway, slashing and stabbing other students with kitchen knives about 8 to 10 inches long, police said. The assault touched off a stampede of kids yelling, Run! Get out of here! Someone has a knife! according to Meixner.

Assistant Principal Sam King heard the commotion and found a chaotic scene in the blood-soaked hall.

I’ve been stabbed, he heard a student say.

King then saw Hribal stab a security guard, who leaned against the wall, bleeding from his stomach, according to a police affidavit. King tackled Hribal and kept him on the floor until a school police officer handcuffed him.

The rampage lasted about five minutes.

There are a number of heroes in this day. Many of them are students, Gov. Tom Corbett said in a visit to the stricken town. Students who stayed with their friends and didn’t leave their friends.

He also commended cafeteria workers, teachers and teacher’s aides who put themselves at risk to help others.

Looking for a motive, Murrysville Police Chief Thomas Seefeld said investigators were checking reports of a threatening phone call between Hribal and another student the night before. He didn’t say whether the suspect received or made the call.

The FBI went to the boy’s house, and local media reports said agents removed at least one computer along with other items.

Meixner and Moore called the attacker a shy and quiet boy who largely kept to himself, but they said he was not an outcast and they saw no indication before the attack that he might be violent.

He was never mean to anyone, and I never saw people be mean to him, Meixner said. I never saw him with a particular group of friends.

During the attack, the boy had a blank look, she said. He was just kind of looking like he always does, not smiling, not scowling or frowning.

Obama to bring back most U.S. troops fighting Ebola in Africa
Heroin overdose antidote: Who gets to carry it?
U.S. diplomatic security unit under scrutiny after Libya attack
In rough year, NYC-area rail has high on-time rate
US Politics: Republicans roar for Tea Party candidate at California convention
White House: Ruling won't affect other Obama picks
Obama reaches out to three key Republicans on immigration reform
"Hillary Clinton" May Not Need a Second Chance to Make a First Impression 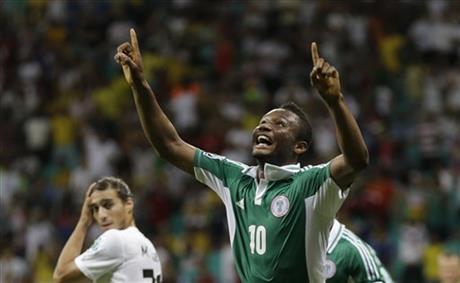 Africa Sports: 5 Nigeria players to watch at the World C… 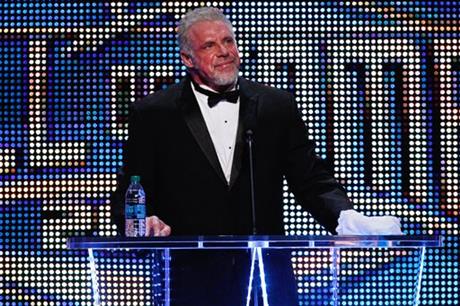