HARARE (Reuters) – The number of people needing food aid in Zimbabwe will rise by 60 percent this year to 1.6 million, the World Food Programme said on Friday, citing an annual assessment carried out by the United Nations and the Zimbabwean government.

A poor farming season this year is blamed on erratic rainfall and limited access to seeds and fertilisers, which prompted Finance Minister Tendai Biti to cut the 2012 growth forecast to 5.6 percent from 9.4 percent.

Zimbabwe harvested 1.077 million tonnes of cereals in the 2011/12 season, down by one-third from the previous season and the lowest since 2009 when a unity government formed by President Robert Mugabe and Prime Minister Morgan Tsvangirai helped revive a sinking economy.

Nearly one in five rural people in the southern African state will need food aid during the peak of next year’s “hunger season”, which runs from January to March when new crops are not ready for harvest, the WFP said in a statement.

“Our field staff are already reporting signs of distress in rural areas, including empty granaries and farmers selling off their livestock to make ends meet,” said Felix Bamezon, the WFP country director.

In December the U.N. Office for the Coordination of Humanitarian Affairs said 1.45 million would need food aid.

Biti said last week that agriculture production for the 2011/2012 season had fallen 5.8 percent, leaving a grain deficit of 445,000 tonnes, which would be partly met through imports by the private sector.

The WFP said it would import cereals from neighbouring countries to distribute in rural Zimbabwe but would also hand out cash in some areas to allow people to buy their own cereals. 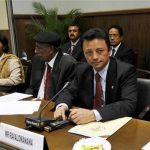 Madagascar rivals fail to agree on leader’s return from exile 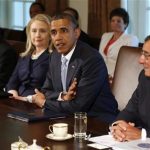 France’s Sarkozy rows back on nuclear help for Libya

US Church divided over claims that pope ignored sex abuse

Bahrain says it arrested 29 during protest on Friday 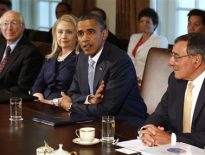 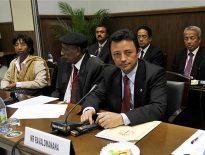