The universe is full of mysteries that challenge our current knowledge. In Beyond Science Epoch Times collects stories about these strange phenomena to stimulate the imagination and open up previously undreamed of possibilities. Are they true? You decide. 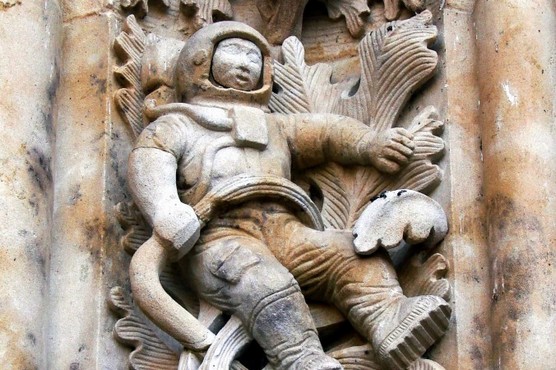 The Salamanca Astronaut sits on the façade on the entrance to the New Cathedral, Salamanca, Spain. (Marshall Henrie/Wikimedia Commons)

Perched on a façade over the northern entrance of a 300-year-old cathedral in Salamanca, Spain, is a carved figure remarkably reminiscent of a modern astronaut. Construction of the cathedral was started in 1513 and completed in 1733.

Instantly, the mind questions what the eyes see. Theories of ancient aliens, time travel, the supernormal power of foresight, and many other ideas come to mind. And, although the world today still holds many mysteries, the mystery of the Salamanca Cathedral Astronaut has a much more down-to-earth explanation.

Salamanca, Spain, is home to two cathedrals. The “Old Cathedral,” simply known as “Catedral Vieja,” which was constructed in about the mid-12th century. As such, it may be one of the oldest cathedrals in Europe.

The other cathedral, known as the “Catedral Nueva” or “New Cathedral,” which is no longer new by today’s standards but was new when it was first called such.

It’s on the New Cathedral’s entrance that the astronaut appears, running laterally, parallel to the entrance. He sits perched on a stalk complete with boots, helmet, and what appears to be a breathing apparatus on his chest with tubes stretching to a pack on the rear of his suit. He is grasping with his right hand what appears to be a vine acting as a harness of sorts running across his waist. His left hand is grasping a nearby leaf for support. His face reflects a rather bewildered expression.

But, how could this be? Astronauts didn’t exist when the cathedral was constructed. It would appear that the carving is actually part of restoration that was done to the cathedral in 1992. At that time, the “Puerta de Ramos” (this is the name of the New Cathedral’s entrance) had seen significant damage over the past few centuries.

The addition was purportedly added by stonemason Miguel Romero and possibly overseen by Jerónimo García de Quiñones, according to Ancient Code: Deciphering History Together. Following tradition, restoration on cathedrals often includes something from modern times, in this case, the restorers chose the figure of an astronaut.

However, supporters of alternative theories believe the astronaut was indeed carved much earlier and that the restoration work merely repaired the damaged astronaut. The mystery lies in the fact the photos of the façade before the restoration and witness accounts of the Puerta de Ramos have become hard to find, adding weight to the controversy.

The astronaut was damaged in 2010 by vandals, according to Ancient Code. The pictures in circulation showing the astronaut with a missing right arm and damaged face are pictures of the damage. The damage has since been repaired.

The city harbors other anomalous carvings. Another such carving is part of the University of Salamanca’s façade. The façade is a very detailed and intricate stone carving depicting all manner of figures and designs. Within the carving is hidden a scull with a frog on top of the head of the skull. This carving is rather old as the façade was commissioned in 1529. It is believed to represent Prince Juan, who died at the young age of 20 in 1497. The frog is believed to represent the physician who treated him, according to the Cultural Travel Guide.

Another “Easter Egg” carving is very close to the astronaut and is situated on the same entrance to the New Cathedral. Dragons are often depicted in cultural carvings like these discussed. But, this particular dragon stands out because he appears to be consuming an ice cream cone with three scoops grasped in his left hand. The ice-cream eating dragon is another example of the 1992 restoration work.

Salamanca is a very old city resting northwest of Madrid. In the 3rd century B.C., it was conquered by the Carthaginians. Later, it would be ruled by the Romans and later still by the Moors, according to the United Nations Educational, Scientific, and Cultural Organization (UNESCO). The cityscape includes monuments of Romanesque, Gothic, Moorish, Renaissance, and Baroque periods. The city was awarded as a UNESCO World Heritage Site in 1988. 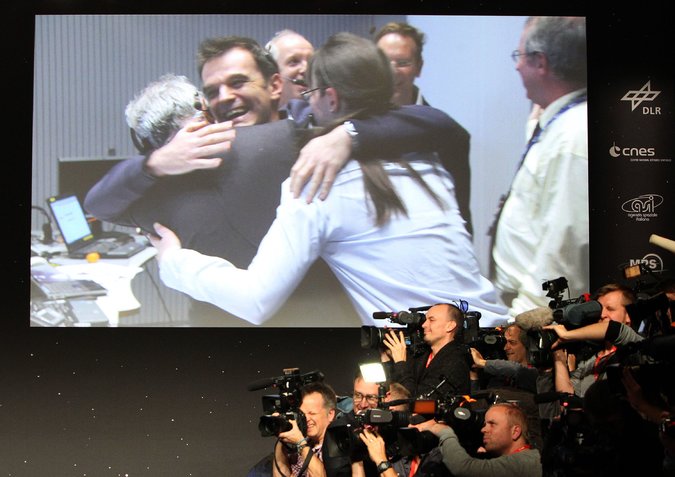 Europe Landing on a Comet, a European Space Agency Missio… 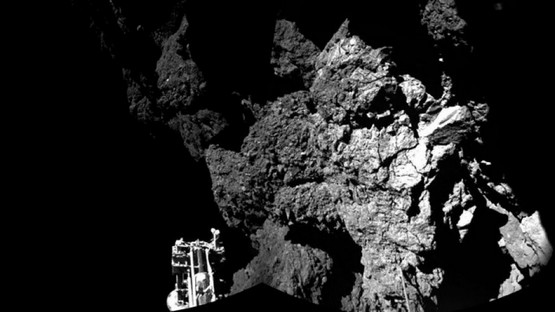