A new statue has been created by Madame Tussauds

Britney Spears didn’t bat an eyelid when she was mobbed by adoring fans and photographers earlier this week – that’s because the glamorous figure standing in New York’s Times Square was a lifelike wax work.

Sporting curly blond hair and a sparkly above the knee dress, Britney’s remarkable looking double was unveiled by Madame Tussauds on Monday (March 26), and fans couldn’t wait to pose for a photo before it went on display.

The Britney-double – a representation of her look at the 2008 MTV Video Music Awards – is the second doppelganger created by the museum chain following their original 2003 waxwork of the star, moulded when she was at the peak of her chart success.

That creation featured Britney hanging upside down on a pole, wearing a green outfit the same as the one she wore in her Slave 4 U video. 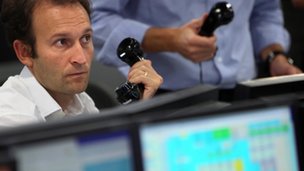