CHICAGO (AP) — Growing up as a street brawler in a Chicago gang and fighting his way into the ranks of champion boxers set Bill Hillmann on a path to an adrenaline-filled passion half a world away: running with the bulls in Spain’s San Fermin festival. 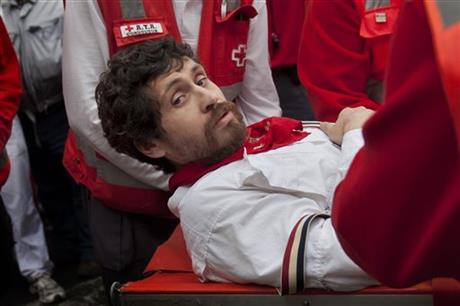 U.S. runner Bill Hillmann, 35, from Chicago, Ill., is carried on a stretcher after being gored on his right leg by a Victoriano del Rio ranch fighting bull during the running of the bulls at the San Fermin festival in Pamplona, Spain, Wednesday, July 9, 2014. A journalist and author, Hillmann, is a veteran San Fermin runner and has written many pieces about the festival. The injury was said to be serious but his life was not in any danger. Revelers from around the world arrive in Pamplona every year to take part on some of the eight days of the running of the bulls glorified by Ernest Hemingway’s 1926 novel “The Sun Also Rises.” (AP Photo/M.J. Arranz)

After years of dancing, as he puts it, with death and majesty in Spain, Hillman fancied himself expert enough to help write a step-by-step guide on how not to get hurt. But true to the book’s warning that anything can happen, a bull gored Hillman twice in the thigh Wednesday at the yearly event in Pamplona.

The American was recovering at a Spanish hospital after being treated for injuries described as serious but not life-threatening. The bull’s horn ripped into his right thigh but missed slicing through a bone or major artery.

He collided with another guy who was running in the opposite direction; Bill fell and as he did the bull gored his right leg, said Michael Hemingway, a great-grandson of writer Ernest Hemingway, who immortalized the event in his 1926 novel The Sun Also Rises.

Hemingway, a teenager, spoke with the AP by phone. He was photographing the event, which he has attended for several years with his father, John Hemingway. John Hemingway and Hillman co-authored the bull-running guidebook, Fiesta: How to Survive the Bulls of Pamplona, published earlier this year.

Hillman’s section of the book is a detailed guide through each stage of the 930-yard course from a holding pen to Pamplona’s bull ring.

It offers tips on how to dive for safety when a bull goes suelto and separates from the pack. That’s an especially dangerous moment when the lone bull loses its herding instinct and sees all runners as predators, he wrote.

British matador Alexander Fiske-Harrison, a friend who edited the book, said Hillmann was using a rolled-up newspaper to try to lure the lone bull away from others in the crowd, something expert runners do.

He took it on and that’s when it gored him, Fiske-Harrison said in a phone interview from Pamplona.

Hillmann has had close calls before. He writes in the book that he was nearly killed one year when he slipped in front of a bull.

Hillmann grew up in the Rogers Park and Edgewater areas on Chicago’s North Side and channeled his energy into boxing, becoming a Golden Gloves heavyweight champion for Chicago in 2002. Later, he turned to writing and just published a semi-autobiographical novel, The Old Neighborhood, about coming of age in Chicago gang territory.

Fiske-Harrison said Hillmann was in good spirits as he was being wheeled into surgery, but that might be because he was on a lot of painkillers.

Later, the bull was killed along with the five others in the bullfight that follows the running.

It was weird seeing the bull come out with my friend’s blood still on the horn, Fiske-Harrison said. 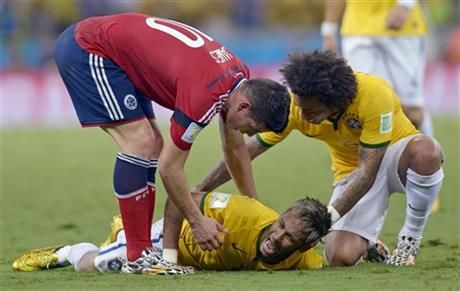 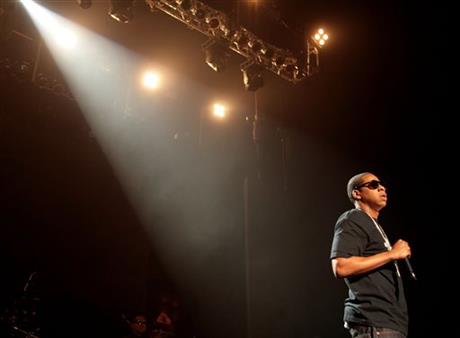