An especially deadly outbreak of Ebola burned unseen in a remote part of Sierra Leone for several weeks, giving public health experts a reality check. It’s also a perfect embodiment of the warning that they’ve been giving for months: that a single spark can set off a conflagration of disease and death. 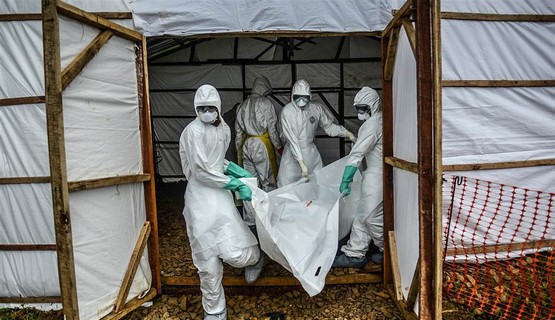 It happened in Kono, a remote district bordering Guinea. World Health Organization workers heard rumors of deaths and traveled there to find scenes out of a horror movie. At least 87 people had died and been hastily buried, often without the precautions needed to stop the corpses from infecting the living.

When we got there the staff at the hospital were exhausted, said Winnie Romeril, a spokeswoman from WHO. They had been working nonstop, trying to manage the large numbers of patients who came in.

Romeril, who was with one of the WHO teams in Kono, said the sick and dying were flooding the small facility.

Everybody was at wit’s end. They were just feeling defeated, she told NBC News.

There weren’t enough vehicles to safely transport the sick, and local residents were so far from any cities or towns that they had not gotten word about Ebola. They didn’t know to seek treatment right away, they didn’t know they should stay away from other people, and they didn’t even know that a fever might mean something far worse than malaria.

In this case, because people were so remote, by the time they got to the hospital it was five days out. They were dehydrated. It was too late, Romeril said. Death rates, she said, were 85 percent.

WHO, the Sierra Leonean government and non-profit groups had been focused on the other hot spots and especially the cities. It’s easy to get distracted when it gets into an urban area, Romeril said.

It would have been better if we had seen it earlier.

Sierra Leone has overtaken Liberia as the country where the Ebola epidemic is the worst, with hundreds of new cases reported every week.

It’s still bad — WHO reports more than 18,000 cases and more than 6,500 deaths in Sierra Leone, Liberia and Guinea. Experts now say it’ll be the middle of next year in the best-case scenario for getting the epidemic under control.

What happened in Kono illustrates just how fragile any success is.

It’s likely that just one person carried the virus there from an affected area, and without precautions in place, it spread like wildfire.

The first couple of doctors to reach Kono were just doing damage control. They literally put four to six patients per ambulance and sent them down horrible roads for a four-hour drive to the Red Cross hospital in Kenema, Romeril said.

Health workers have now started training people how to conduct safe burials, without washing the highly infectious bodies of victims. The transmission rate has, apparently, plummeted.

We know how to fight Ebola, Romeril said. The most practical thing to do for people is to give them oral rehydration solution, but people don’t know to do that, to drink three to four quarts of fluid a day.

Doctors who have treated Ebola patients say they lose an unimaginable amount of fluids — seven or eight quarts a day, in some cases, to the violent vomiting and diarrhea caused by the infection. It’s hard to do that with someone who just wants to roll over and sleep. If you can do it, you can dramatically improve survival, Romeril said.

Teams are now in Kono setting up clinics, training staff and helping them separate the Ebola-infected from everyone else. Without good management, a hospital just becomes a hot zone for infecting everyone who enters with Ebola.

Everything is happening very, very fast now, Romeril said. It’s possible to turn this around.

Romeril says WHO and the ministry of health believe they’ve got all the districts covered now. But resources are still spread thin and, perhaps even more important, so is the expertise.

We need very specific types of people, Romeril said. You can’t find an epidemiologist on every corner.