AUSTIN, Texas (AP) — Hours before final debate began Friday on tough new abortion restrictions, vocal demonstrators on both sides of the issue filled the Texas Capitol, opponents in orange and some carrying gynecological devices and supporters wearing blue and holding images of fetuses and Bible verses. 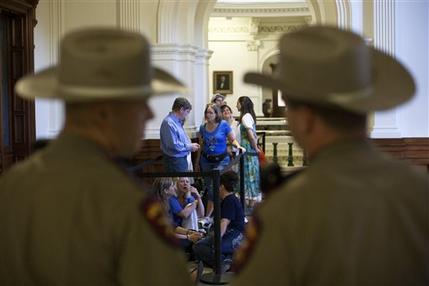 Dozens wait to enter the Senate gallery moments after the Texas State Capitol opened its doors at 7 a.m., in Austin, Texas, Friday, July 12, 2013. The Texas Senate’s leader, Lt. Gov. David Dewhurst, has scheduled a vote for Friday on the same restrictions on when, where and how women may obtain abortions in Texas that failed to become law after a Democratic filibuster and raucous protesters were able to run out the clock on an earlier special session. (AP Photo/Tamir Kalifa)

The circus-like atmosphere marked the culmination of weeks of protests, the most dramatic of which came June 25 in the final minutes of the last special legislative session when a Democratic filibuster and subsequent protest prevented the bill from becoming law. Senators were expected to begin debate on the bill Friday afternoon, with a vote to follow in the evening or possibly early Saturday morning.

The Senate’s leader, Lt. Gov. David Dewhurst, is determined not to let anything – or anyone – derail a vote again.

“We’re going to have strict enforcement. If there are any demonstrations, we are going to clear the gallery,” Dewhurst said Thursday. “I hope we don’t get to that point but if we do, we do.”

House Bill 2 could shut all but five abortion clinics in Texas and would be a win long-eyed by conservatives who make abortion a key campaign issue, but the raucous debate surrounding the measure has also given Texas Democrats newfound momentum. The Republican majority is expected to ultimately pass the bill, with Democrats left to do little more than enter into the legislative record material that could help defeat it in federal court.

Dozens of extra state troopers guarded the gallery and patrolled the hallways Friday, which filled quickly with activists. Some had arrived as early as 4:30 a.m. Friday, and though the line grew at the security station, every bag was thoroughly checked.

A small group of abortion rights activists settled on the main floor of the rotunda, displaying homemade “wanted” posters of several prominent Republican lawmakers, notably Dewhurst. The chanting started about an hour before the 2 p.m. session’s start, strains of Twisted Sister – “We’re not gonna take it!” – and “Whose choice? Our choice” echoing.

Every person who enters the gallery will be issued a copy of the “rules of decorum” that stipulate there can be no demonstrations or attempts to disrupt the chamber’s work. The Texas Constitution gives Dewhurst the authority to jail those who break the chamber’s rules for up to 48 hours, no court necessary.

Among the first two in line were anti-abortion activist Johanna McCrary of Conroe and abortion rights supporter Kristi Lara of Dallas. Both came to the Capitol after the filibuster and have been in Austin for more than a week.

“This is a civil rights issue,” Lara said, comparing the efforts of abortion rights activists to demonstrations during the civil rights era.

“We will not give up the rights our mothers and grandmothers fought for,” said Lara, who was wearing an orange dress with a white sash that read “Vote for Women” and had a plastic speculum, a gynecological instrument, hanging from her neck.

Senate Sergeant-At-Arms Rick DeLeon said Friday that no props – including speculums and coat hangers – will be allowed into the Senate gallery, per decorum rules.

For Dewhurst, who lost control of the Senate to what he called an “unruly mob” during a debate two weeks ago, his political survival relies on the bill’s passage. Once considered a formidable politician, Dewhurst bid goodbye to his Senate colleagues in 2011, expecting to easily win a U.S. Senate seat. But tea party favorite Ted Cruz painted him as a moderate, and now he has three challengers in the Republican primary for re-election.

Democrats successfully defeated the bill in the regular legislative session. During the first special session, the Senate didn’t take up the bill until the final day. That allowed Fort Worth Sen. Wendy Davis to use a filibuster to delay a vote.

When Republicans rushed to try to pass the bill in the session’s final 15 minutes, angry protesters began shouting and screaming from the gallery. Dewhurst could only watch with frustration as a half-dozen state troopers tried to remove more than 450 people.

The restrictions are a top priority for the Christian conservative voters who make up a majority of Texas Republican voters and want abortions banned. Democrats, however, see the protests as an opportunity that could help them break a 20-year statewide losing streak.

Democrats believe Republicans have overreached in trying to appease their base and alienated suburban women, a constituency that helped President Barack Obama win re-election. Democrats have helped organize the recent protests – more than 5,000 people swarmed the Capitol last week – and top lawmakers have toured the state as part of Planned Parenthood’s “Stand With Texas Women” campaign.

The measures under consideration Friday mirror restrictions passed in Mississippi, Ohio, Oklahoma, Alabama, Kansas, Wisconsin and Arizona, but passing them in the nation’s second-most populous state would be a major victory for the anti-abortion movement.

The Texas bill would require doctors to have admitting privileges at nearby hospitals, allow abortions only in surgical centers, limit where and when women may take abortion-inducing pills and ban abortions after 20 weeks. Only five out of 42 existing abortion clinics meet the requirements to be a surgical center, and clinic owners say they can’t afford to upgrade or relocate.

Republicans insist the restrictions would guarantee better health care for women and fetuses. But critics see it as a way of regulating all Texas abortion clinics out of business.

There’s one thing both sides can agree on: Abortion rights groups will file a federal lawsuit as soon as Republican Gov. Rick Perry signs the bill into law. Judges elsewhere have stopped enforcement of similar laws while they work their way to the U.S. Supreme Court. 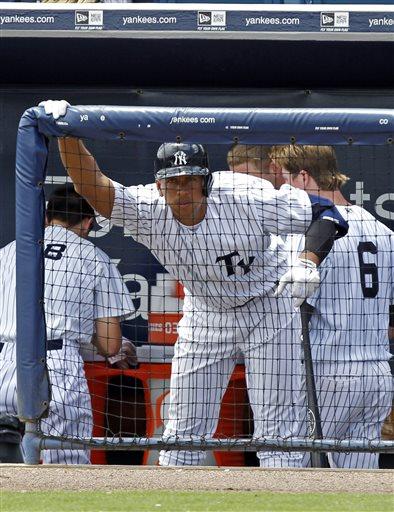 Entertainment Something You’re Not Telling Us? Naomi Harri…
Wildcard SSL