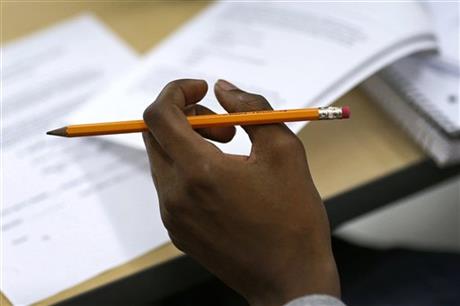 This photo taken March 12, 2014, shows student Rahman Hassan holding a pencil as he works on an exercise in a remedial English course at Baltimore City Community College in Baltimore. Only about a quarter of students nationally who take developmental _ or remedial _ classes ever graduate. The problem is so profound that the advocacy group Complete College America dubs remedial classes the “bridge to nowhere.” The challenge, educators say, is that even as billions is spent annually on remedial classes, many of these students run out of financial aid before they can complete their credit requirements, get discouraged by non-credit classes or find themselves unable to complete them. The Baltimore school is one of several places around the country looking to improve the odds for these students. (AP Photo/Patrick Semansky)

BALTIMORE (AP) — The odds have long been stacked against students like those in Edward Ennels’ remedial math classes at Baltimore City Community College.

Only about a quarter of students nationally who take developmental — or remedial — classes ever graduate.

The problem is so profound that the advocacy group Complete College America dubs remedial classes the bridge to nowhere. The challenge, educators say, is that even as billions are spent annually on remedial classes, many of these students run out of financial aid before they can complete their credit requirements, get discouraged by non-credit classes or find themselves unable to complete them.

The Baltimore school is one of several places around the country looking to improve the odds for these students.

The school, which serves a large swath of non-traditional students from the city of Baltimore, has combined some non-credit developmental classes, so students spend less time in them. It also has increased tutorial and other student supports and is re-thinking how classes are taught.

Ennels’ math classes include online, real-time assessments and students work at their own pace in areas they specifically need help.

In this program, we only cover what the students need, Ennels explained, pausing after chatting with students pounding away on computer keyboards.

Nationally, it’s estimated that more than a third of all college students — and more than half in community colleges — need some remedial help. Some students enter college two, three or even four semesters behind in a subject, says Thomas Bailey from the Community College Research Center at Teachers College, Columbia University.

That’s putting increased demands on colleges already facing mounting pressure to curb tuition costs and help meet the White House goal of having the highest proportion of college graduates in the world by 2020.

And that’s led to innovation around the country.

In Massachusetts, for example, public colleges and universities are experimenting with using a high school GPA rather than a standard assessment test to determine whether students really need remedial courses. It is also re-examining whether some algebra-based classes can be replaced with more statistics-heavy ones for some majors.

At Texas State University and elsewhere, administrators have implemented a model that allows some students to enroll simultaneously in a remedial class and a college-level one in the same subject area. Connecticut is looking to get more high school students into its college for classes before they graduate and is encouraging public universities to send educators into high school to encourage more coordination. It’s also embedding extra support into college-level classes.

The City University of New York offers a boot-camp style program developed to more quickly get students out of remedial classes. The intensive classes are designed to allow students to save financial aid for credit courses.

And Florida is taking the leap of making remedial community college classes voluntary for the state’s high school graduates or active-duty military members. It’s up to the students to decide if they need them. Colleges also are stepping up advising and training of faculty.

Some of these changes are controversial, and the question now is finding what works. Bailey’s center is tracking the effectiveness of various models, and already has found some success, for example, with those that allow students to complete non-credit remedial courses more quickly.

The issue has also gotten Washington’s attention. Improving remedial education was a topic addressed at a White House summit on higher education earlier this year and at a recent House education committee hearing.

Richard Freeland, commissioner of Higher Education for Massachusetts, said he’s hopeful renewed focus on the problem will bring about change, but he’s realistic about the challenges. Of the 11,000 community college students in Massachusetts who took a remedial math class in fall 2010, 9,000 hadn’t yet passed a credit-bearing class, according to 2013 task force report.

This is a tough issue, and anybody who says they think they’ve got it solved doesn’t know what they’re talking about as far as I’m concerned, Freeland said.

Higher education officials say if high school graduates were better prepared for college, there would be no need for remedial education. Some students entering these classes are fresh out of high school and didn’t realize they weren’t fully prepared for college until they got there, said Josh Wyner, who leads the Aspen Institute’s higher education division and wrote a book about community colleges.

Students are graduating with a diploma, sometimes with a B average or better, they immediately go to college and they get tested and they are told, you are reading at a 10th grade level, Wyner said. Really, the high schools have lied to them in their grades.

But others needing remedial help are immigrants with specialized needs and non-traditional students like Floria Zobear, 58, who haven’t been in a classroom in decades.

Zobear, a Navy veteran who holds a GED, worked in corrections until she became disabled in a workplace injury. Back in school in Baltimore, she likes the individual attention in Ennels’ class since she’s always seen math as a monster.

He’ll say, what do you need help with? And he’ll come back to you individually, so you can understand, Zobear said.

At the Baltimore college, only about a third of first-time, full-time students come in college-ready in reading and English and 6 percent in math.

Naesea Price, an instructor of developmental English classes at the Baltimore college, said students like the changes in the remedial program, even though there’s more homework. 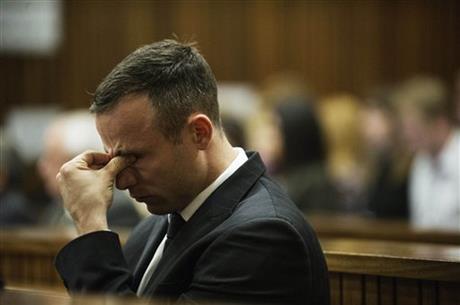 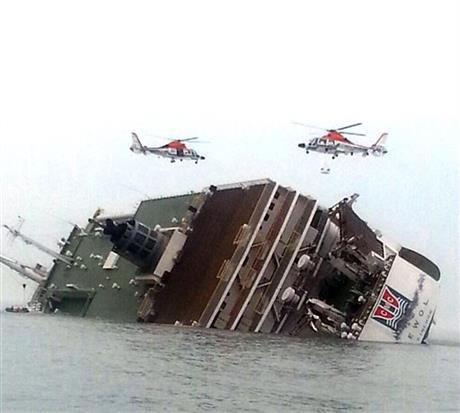