(Reuters) – The first wounded and sick women trapped in the most embattled district of the Syrian city of Homs have been evacuated, and talks were held to evacuate more on Saturday, while pressure mounted on President Bashar al-Assad’s government to call a ceasefire and let in humanitarian aid. 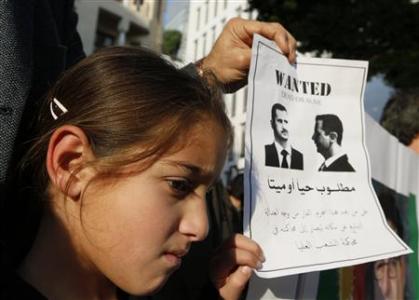 A Syrian girl living in Lebanon attends a protest with her father against Syrian President Bashar al-Assad during a sit-in demonstration in Beirut, February 24, 2012. REUTERS/Jamal Saidi

Assad’s forces killed 103 people in Syria on Friday in the bombardment of the besieged city of Homs and in attacks on the countryside of Hama and the east and north of the country, the activist group Local Coordination Committees said.

Most of those killed were civilians, including 14 children and one woman, it said.

The killings continued the same day that Western and Arab nations meeting in Tunis mounted the biggest diplomatic push in weeks to end Syria’s 11-month-old crackdown on the opposition.

U.S. Secretary of State Hillary Clinton warned Assad — and his backers inside Syria and abroad — that they will be held to account for the crackdown on opponents and what she described as a humanitarian catastrophe in Syria.

Addressing her comments to Russia and China, which vetoed tough action on Syria in the United Nations, she said: “They are setting themselves not only against the Syrian people but also the entire Arab awakening.”

“It’s quite distressing to see permanent members of the Security Council using their veto when people are being murdered – women, children, brave young men — houses are being destroyed. It is just despicable.”

“I am convinced Assad’s days are numbered, but I regret that there will be more killing before he goes,” she said.

President Barack Obama, speaking in Washington, said: “It is prime time to stop the killing of Syrian citizens by their own government.”

“All of us seeing the terrible pictures coming out of Syria and Homs recently recognize it is absolutely imperative for the international community to rally in sending a clear message to President Assad that it is time for a transition.”

Diplomatic moves are hamstrung, so far at least, because there is little appetite for military intervention in Syria and attempts to ease Assad out via the United Nations Security Council have been stymied by Russian and Chinese vetoes.

Beijing and Moscow declined invitations to attend the meeting in Tunisia.

In a tacit acknowledgement that the scope for pressuring Assad through diplomacy is limited, some of the delegates at the conference — especially Gulf states long opposed to Assad — pressed for an international peacekeeping force in Syria and favored arming the Syrian rebels.

The Syrian opposition, meanwhile, appeared to be taking matters into its own hands, saying it was supplying weapons to rebels inside Syria while Western and other states turned a blind eye.

The International Committee of the Red Cross (ICRC) said the Syrian Arab Red Crescent initially brought out seven women and children from the besieged Baba Amro district of Homs and took them to a hospital in elsewhere in the city.

A further 20 uninjured women and children were evacuated later and taken to “a safe area,” ICRC chief spokeswoman Carla Haddad said. Foreign journalists trapped in the area were not among them.

“We are continuing discussions to resume the operation tomorrow morning.”

With the bombardment of opposition-held neighborhoods in Homs entering its fourth week on Friday, the ICRC has been negotiating with the Syrian government and opposition forces to bring out the sick and wounded from Baba Amro.

But foreign journalists trapped in Baba Amro, two of them badly wounded, refused to leave the besieged neighborhood without an ICRC and foreign diplomatic presence, and a commitment to a full humanitarian ceasefire, it said.

A Syrian Foreign Ministry official, quoted by the state news agency, said attempts to bring the journalists out of the area had been obstructed by opposition groups.

“Authorities in Homs sent a number of notables of the city and ambulances from the Syrian Arab Red Crescent to receive the foreign journalists who had entered Syria illegally,” the official said.

“Despite continuing this effort for several hours with armed groups in Baba Amr, these groups refused to hand over the wounded and the bodies – putting the life of the wounded French woman in danger and hindering the return of the bodies (of the two dead journalists) to their respective countries.”

A French and ICRC plan to get international medical teams in to extract the foreign journalists and tend to the neighborhood’s most badly wounded was rejected by the Assad government, activist group Avaaz said.

With the wounded being taken only as far as a hospital in Homs, it was unlikely men would agree to leave the area for fear of falling into the hands of Syrian security forces.

“Baba Amro is being hit with 122mm artillery directed at it from surrounding villages. A father and his 14-year-old son were among those killed. They were trying to flee the shelling when shrapnel hit them in the street,” resident Mohammad al-Homsi said.

Activists also said Syrian security forces lined up and shot dead at least 18 people in a village in the central western Hama province. A video uploaded by activists showed people wrapping the bloodied bodies of children and at least four adults. Several had been shot through the head.