(Reuters) – A Canadian company’s decision on Monday to proceed with part of a U.S. pipeline might end up muffling one of the Republicans’ loudest arguments in this election year: that President Barack Obama has pursued failed energy policies. 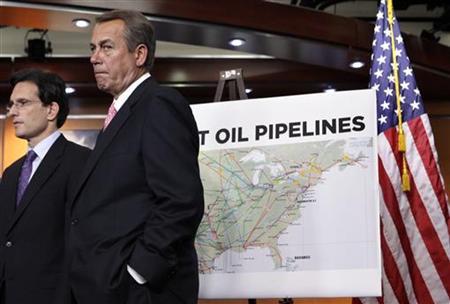 TransCanada Corp announced it intended to begin work on the southern leg of the $7 billion Keystone XL project, from Oklahoma to Texas, leaving for later another run at the more controversial, and complicated, northern segment.

For months, Republicans have hammered Obama for blocking the pipeline project out of concern for the environmentally sensitive areas south of the U.S.-Canada border. Republicans seeking re-election to Congress uniformly branded his decision as a job-killer that undermines energy independence.

While Obama must still face Republican wrath over rising gasoline prices, his opponents will now find it harder to press their attacks over Keystone, a project that garners wide support among American voters.

According to an early February poll by the Pew Research Center, 66 percent of those who had heard about the Keystone XL project thought it should be approved.

With gasoline prices rising significantly even before the heavy summer driving season has begun – average retail prices are now nearly $3.70 a gallon, up from $3.35 a year ago – Republicans tried to connect Keystone with pain at the pump.

For Republicans, Keystone was more than a pipeline project. It was their poster child for what was wrong with White House energy policy.

So the White House was swift to welcome TransCanada’s latest announcement. “We’ll make sure that any federal permitting that is involved … will be acted on very quickly” for the southern leg, Obama spokesman Jay Carney told reporters.

A senior Senate Democratic aide said that with a large portion of the pipeline moving toward federal approval, “Republicans have less and less ground” on which to attack Obama.

But Republicans continued on Monday to press for U.S. approval of the entire Canada-to-Texas oil pipeline.

“It is time for President Obama to stop putting politics ahead of struggling families and small businesses and approve the Keystone XL pipeline,” House of Representatives Speaker John Boehner, the top congressional Republican, said in a statement.

The White House said it had been advised by TransCanada in advance of Monday’s announcement, but gave no details of any discussions between the company and the administration.

TransCanada’s move also gave the White House a backdrop for talking about the growing “glut” of U.S.-produced oil that is getting backed up in Oklahoma, where the southern leg of Keystone XL will start. That highlights administration assertions that Obama has presided over a sharp uptick in domestic production, contrary to Republican attack ads.

The southern leg of the pipeline, which could be operational by late next year – if environmentalists fail to persuade federal, state and local governments to block it – could ease a bottleneck at Cushing, Oklahoma, and help speed it to Texas refineries on the shores of the Gulf of Mexico.

For Democratic Senator Claire McCaskill, who faces a tough re-election campaign in Missouri, which borders Oklahoma, TransCanada’s decision was “good news for American jobs, and a good step toward increasing energy production right here at home.”

A senior Republican aide on the Senate Energy Committee acknowledged that building the southern leg would “hopefully resolve the bottleneck at Cushing.”

With retail gasoline prices on a path to top $4 a gallon soon and possibly touch $5 if political tensions with oil-producing Iran get worse by midyear, voter frustration with Obama likely will rise – with or without Keystone being built.

“Delaying the Keystone XL pipeline is not the reason gasoline prices have been going up, and moving forward on a variant of Keystone will not bring them down,” said Michael Levi, an energy analyst with the Council on Foreign Relations. “When it comes to today’s gas prices, the Keystone fight is a sideshow,” he said.

As Democrats in Congress perked up over the TransCanada announcement, Republican Senator Lisa Murkowski went to the floor of the Senate to squash any celebration. She complained that in her home state, the Trans Alaska Pipeline was only “half full” with oil because Democrats had blocked new drilling in the environmentally sensitive Arctic National Wildlife Refuge as well as some offshore drilling projects.

Obama is countering that there are no easy answers to rising energy prices and that “drill baby drill,” a policy of expanded domestic oil exploration advocated by Republicans, will not end U.S. dependence on foreign oil.

But that “is a big communications challenge for him” at a time when the cost of filling the gas tank is rapidly escalating, said the senior Senate Democratic aide.