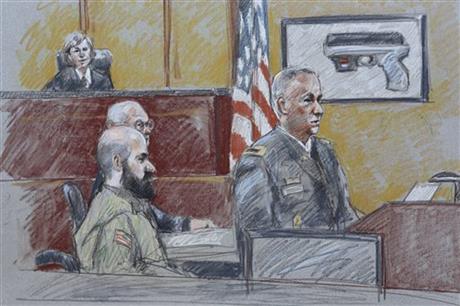 CORRECTS HENRICKS’ RANK TO COLONEL INSTEAD OF LT. COLONEL – In this courtroom sketch, military prosecutor Col. Steve Henricks, right, speaks as Nidal Malik Hasan, center, and presiding judge Col. Tara Osborn look on during Hasan’s court-martial Tuesday, Aug. 6, 2013, in Forth Hood, Texas. Hasan is representing himself against charges of murder and attempted murder for the 2009 attack that left 13 people dead at Forth Hood. (AP Photo/Brigitte Woosley)

Lt. Col. Kris Poppe said he is willing to step in and be Hasan’s attorney. But if Hasan continues to work toward being executed, Poppe asked that his responsibilities as co-counsel be minimized.

Poppe said it is “clear his goal is to remove impediments or obstacles to the death penalty and is working toward a death penalty.”

In response, Hasan said: “I object. That’s a twist of the facts.”

Hasan is representing himself at his trial, though he has defense attorneys on standby if he needs them. On Monday, he told the court that the evidence presented during the trial would “clearly show” he was the shooter.

So far, Hasan has raised few objections during the trial and asked almost no questions of witnesses on cross-examination.

“The evidence will clearly show that I am the shooter,” Hasan said in an opening statement on Tuesday that lasted little more than a minute. The evidence, he added, would “only show one side.”

Hasan, an American-born Muslim who was paralyzed after being shot by officers responding to the attack, said he was as a soldier who switched sides in what he described as a war between America and his Islamic faith. He then fell silent for most of the day.

Hasan had wanted to argue that he carried out the shooting in “defense of others,” namely members of the Taliban fighting in Afghanistan, but the judge denied that strategy. His defense strategy still remains unclear.

During Tuesday’s testimony, he occasionally took notes on a legal pad. While two defense attorneys remained on stand-by, Hasan rarely turned to them for advice.

No American soldier has been executed since 1961, and military prosecutors showed that they would take no chance of fumbling details that could jeopardize any conviction down the line.

The long-delayed trial was years in the making after judges in the case had granted a series of delays. A fight over Hasan’s beard, which violates military regulations, led to a stay shortly before his trial was expected to begin last year and eventual replacement of the judge.

The trial is playing out amid high security at Fort Hood, where armed guards stood in doorways and 15-foot stacks of shock-absorbing barriers obscured the view of the courthouse. Jurors were told to prepare for a trial that could take months, and Hasan, who is in a wheelchair, needs regular breaks. 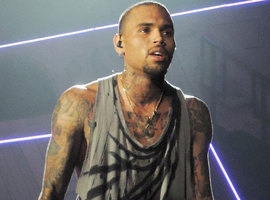 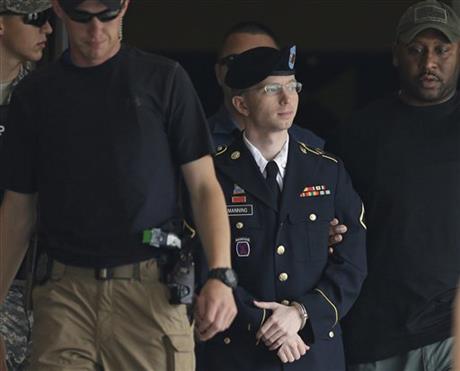