(Reuters) – A staunch conservative from a moderate state, Rick Santorum is unlikely to get much home comfort in Pennsylvania as he tries to stay near the front of the race for the Republican presidential nomination. 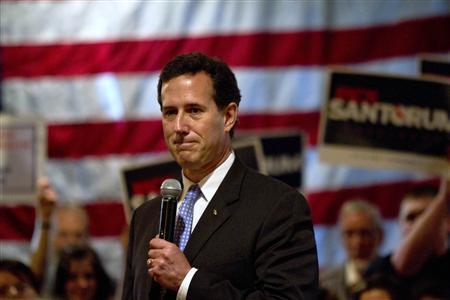 Republican presidential candidate and former U.S. Senator Rick Santorum addresses supporters at a rally at The Ravine in the Town of Bellevue Wisconsin March 24, 2012. REUTERS/Darren Hauck

Early opinion polls show Santorum leading main rival Mitt Romney ahead of the April 24 primary in Pennsylvania, a state he represented in Congress for 16 years before being resoundingly voted out of the Senate in 2006.

But Santorum faces a tough fight to hold his lead in a state where he must win – and win well – to keep his presidential ambitions afloat.

Compared to most of the states where Santorum has done well, Pennsylvania is larger and wealthier and television advertising is expensive in its big cities. That is all typical of places where the better organized and well-financed Romney has triumphed.

In the heavily populated Philadelphia area, where Pennsylvania will be won or lost in November’s general election, even Republicans are moderate on cultural issues such as abortion rights and gay marriage, a problem for Santorum, who is known best for unflinching religious conservatism.

“There isn’t any doubt that his positions on cultural issues are at odds with the Republican voters in the Philadelphia suburbs,” said Terry Madonna, a long-time Santorum observer and professor at Franklin & Marshall College in Lancaster.

“Republican voters in the Philadelphia suburbs are more liberal on gays, guns and abortions than the Democrats in any part of the state with the exception of inner-city Philadelphia,” he said.

A narrow victory may not be enough for Santorum, who could be under pressure on primary night to quit the race if Romney wins big in other liberal states like New York and Connecticut which hold primaries on the same night as Pennsylvania.

The polls that put Santorum ahead do not make him a strong home-state front-runner compared to his rivals’ performances on their home turf.

Romney took an overwhelming 72 percent of the vote in the primary in Massachusetts, where he was governor. Former Speaker of the House of Representatives Newt Gingrich, running third in national polls, won his home state Georgia with 47 percent.

A Quinnipiac University poll on March 14 showed Santorum with 36 percent support in Pennsylvania. Romney was at 22 percent in the poll but he had trailed early in other large states, including Illinois and Florida, that he went on to win easily.

“So far this primary season, Romney has shown an ability in major states to come back through his own organization, his ties to the party organization and his ability to buy a lot more television time than Santorum can afford,” Quinnipiac pollster Peter Brown said.

Santorum has prospered mostly in Republican bastions where evangelical Christians play a big role in party politics, such as Louisiana, where he comfortably won Saturday’s primary.

Santorum is expected to do well with such voters in the rural center of Pennsylvania and they could deliver victory if turnout is low in the east and west.

“Pennsylvania voters are very parochial,” said Brian Nutt, Santorum’s state director. “And what Rick Santorum has proven time and time again his races is he is a tireless campaigner. He understands the values and the issues that are important to Pennsylvania’s many regions.”

Pam Todd, 74, a Philadelphia artist and member of the fiscally conservative Tea Party, felt strongly the election should be focused on the economy and defeating Obama, not issues like abortion and gay marriage.

“I feel that perhaps Romney is the most electable. I like Rick very, very much. I admire his guts. But he sometimes gets down in the weeds on the social issues,” she said.

“You can really get into the social issues and the country could go over a cliff fiscally,” Todd said.

One of the state’s main Tea Party groups, the influential Independence Hall Tea Party Association PAC, endorsed Romney in the fight to be the Republican who will face President Barack Obama in November.

“There are a fair number of Republicans who are driven by social issues but they aren’t as committed to those issues as economic issues in an election cycle like this one,” said Alan Novak, a former chairman of the Pennsylvania Republican Party who is backing Romney.

“The election is really first a referendum on the president, unemployment and gas prices,” he said.

A good Santorum win would be a moral victory but would not necessarily boost his delegate count. Pennsylvania’s primary result does not commit the state’s 72 delegates, who are free to vote for anyone they want at the Republican convention.

Leading statewide leaders have not endorsed Santorum, while an array of prominent state Republicans, including the popular former governor, Tom Ridge, support Romney.

Santorum lost his bid for re-election to the U.S. Senate in 2006 by 18 percentage points, among the worst defeats of an incumbent ever. With the unpopular senator trounced at the top of the ticket, Pennsylvania Republicans also lost their majority in the congressional delegation and the state house.

The state party roared back in 2010, winning the governor’s mansion and taking back the state house. Santorum’s campaign said he was caught in an anti-Republican wave but Republicans have not forgotten 2006.

“This is not a very mobile state. This is not a state where people are coming in, moving and leaving. They knew Santorum,” said Lara Brown, a political scientist at Villanova University near Philadelphia.

“When they are reminded of what they knew about him, he is going to have a difficult time winning the statewide vote.”

One of Santorum’s problems in his home state is his support for former Senator Arlen Specter, a moderate Republican who became a Democrat in 2009. Santorum backed Specter’s 1995 presidential bid and supported him in a 2004 primary fight against Pat Toomey, a conservative who captured Specter’s old Senate seat in 2010.

“A lot of people, especially people from where I’m from, associate him with Arlen Specter,” said Villanova student Katie Dunn, 19, who grew up in Wexford, near Santorum’s hometown in western Pennsylvania and plans to vote for Romney.

“Mitt Romney is overall a better candidate,” she said.