(Reuters) – Republican presidential candidate Mitt Romney is not doing enough to ensure his political actions are not influenced by his multimillion-dollar fortune, officials with President Barack Obama’s campaign said on Thursday. 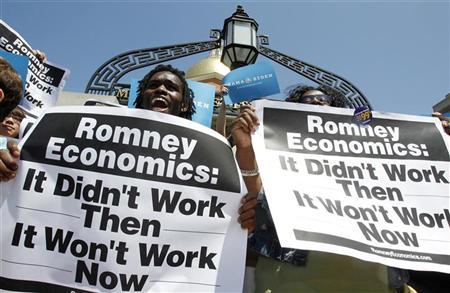 Supporters of President Barack Obama hold signs outside the Massachusetts State House before the start of a news conference in Boston, Massachusetts May 31, 2012. Obama's campaign attacked Republican rival Mitt Romney on Thursday for failing to create jobs as Massachusetts governor, calling it more evidence of a flawed economic approach that would be disastrous in the White House. REUTERS/Jessica Rinaldi

The Obama campaign questioned why Romney has kept his extensive investments in a blind trust administered by his longtime lawyer, rather than setting up a trust that meets more rigorous federal conflict-of-interest standards.

Obama officials periodically invoke Romney’s fortune, worth as much as $250 million, to try to make the case that he is out of touch with the concerns of most Americans.

“It raises a host of questions of why it is that he will not abide by more rigorous standards,” Obama general counsel Robert Bauer said on a conference call.

The Romney campaign dismissed the questions as an effort by the Obama campaign to change the subject after a string of bad news in recent days.

Romney has pulled virtually even with Obama in several polls, raised more campaign cash than the president’s team did in May, and has new hope of a strong showing in Wisconsin, where Republican Governor Scott Walker survived a recall election on Tuesday.

“Another day, another tired distraction by the Obama campaign, which is frantic to avoid discussing the continued rejection of President Obama’s agenda by the electorate and by members of his own party,” Romney spokeswoman Andrea Saul said.

“As has been reported for years, Governor and Mrs. Romney’s assets are managed on a blind basis,” Saul added. “They do not control the investment of these assets, which are under the control and overall management of a trustee.”

Since he was elected governor of Massachusetts in 2002, Romney’s finances have been handled in a blind trust by longtime personal attorney Brad Malt, who also served as the primary outside lawyer to Romney’s former private equity firm, Bain Capital.

That arrangement would not comply with stricter federal standards for independence, said Stephen Potts, a former head of the U.S. Office of Government Ethics.

Romney officials have said they would set up a blind trust that meets federal standards if he were elected president. That means Romney, and the public, wouldn’t know details of his holdings, Potts said.

Obama officials say Romney should have set up the federal trust when he first ran for president in 2007.

Critics question whether Malt has handled Romney’s finances in a truly independent manner, pointing to a $1 million investment in Solamere Capital LLC, a hedge fund run in part by Romney’s son Tagg.

Malt also has said he tries to manage the fund in a way that reflects Romney’s political beliefs.

Romney has been reluctant to reveal details of his private fortune.

Under pressure from Republican rivals in January, he released a tax return from 2010 and an estimate for 2011 that show he paid a lower effective tax rate than many top wage earners. Romney officials said then that his holdings included funds based in the Cayman Islands and other overseas entities. A Swiss bank account was closed in 2010, Malt acknowledged, to avoid the appearance that Romney was using the account to dodge taxes.

Romney has declined to release tax records for the years in the 1980s and 1990s when he made his fortune at Bain.

Romney gave up day-to-day control of Bain in 1999, but continued to participate in Bain investments for 10 years under a severance agreement. He has continued to earn money from his Bain investments since that agreement expired; a disclosure form filed last week revealed roughly $2 million in new Bain income.

Romney has declined to reveal details about his severance agreement with Bain, raising questions about his continued ties to the firm.

Obama officials suggested that Romney might still be involved with the company in order to qualify for a low tax rate, known as “carried interest,” that is claimed by private-equity partners.

“He may have some sort of an arrangement by which Bain believes that he’s continuing to render valuable service in some way to them,” Bauer said.

One tax analyst said the law is clear that Romney could qualify for the low rate based on the work he did at Bain before he left.

“I think the law is pretty clear that he’s entitled to carried interest treatment for those profit interests,” said David S. Miller, a tax lawyer at Cadwalader Wickersham & Taft. 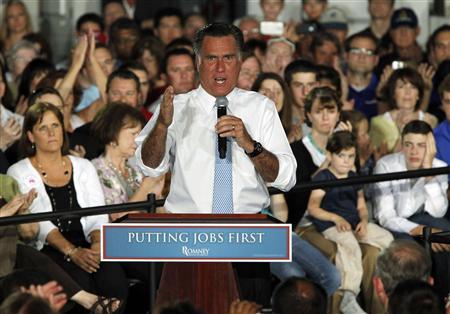 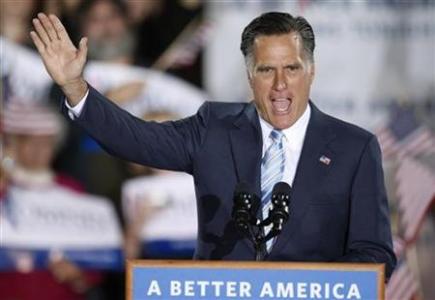