(Reuters) – President Barack Obama sought on Thursday to stoke enthusiasm in California about his 2012 re-election drive, saying he wanted another chance to overhaul immigration and tackle climate change with a second term. 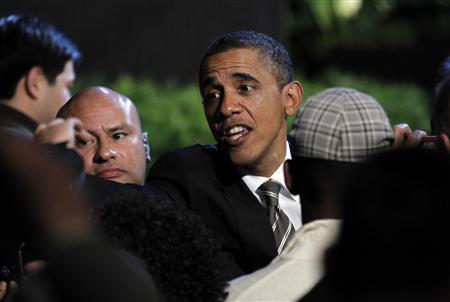 U.S. President Barack Obama greets members of the audience after speaking at a Democratic Party fundraiser in San Francisco February 16, 2012. Obama is attending several fund-raisers on the West Coast on Thursday. REUTERS/Jason Reed

At a series of fundraisers in San Francisco, the Democrat acknowledged he has had a tough first three years in office and asked supporters to summon the energy to mobilize for him again to complete unfinished business on his agenda.

“We’re going to have to be as focused as we were in 2008,” he said, joking that it was “not as trendy” to support him now as when he first emerged as a presidential candidate, but also noting the economic downturn has dampened spirits.

“We’ve gone through three tough years and so people want to hope, but they’ve been worn down by a lot of hardship,” he told 70 people who paid $35,800 each to attend a dinner that included a live performance from soul singer Al Green.

He also pitched items of interest but left unattended in his first term, including addressing the large numbers of undocumented workers in the United States and facing down global warming.

“And we’re going to have to figure out how to pay for all this stuff,” Obama said, saying that wealthier Americans – like him and like them, in his words – “can do a little bit more to make sure that kid around the corner has a chance like we did.”

California’s economy is the biggest among the U.S. states and is the ninth-largest in the world, ahead of India, Canada, Russia and Spain.

Obama has been courting support from both Hollywood and the California tech sector as the election year is underway. He is expected to raise $8 million in six fundraising events in California – the first was in Los Angeles on Wednesday night – plus two in the Seattle area on Friday.

About 100 protesters ranging from conservative Republicans to ardent environmentalists gathered on Thursday evening outside one of Obama’s San Francisco fundraisers. Some held signs that included “OMG – Obama Must Go” and “There Is No Hope And No Change,” a throwback to his 2008 slogan.

Ray Sarakaitis, a 71 year-old Tea Party activist, said he had one goal for the November 6 election. “What we’d like to see is Obama’s reign end at the end of his term,” he said outside the reception for 2,500 people, where tickets started at $100.

The Tea Party movement is a loose-knit, grassroots organization pressuring for smaller government and less taxation.

The president attended a fundraising breakfast there where 125 supporters contributed at least $2,500. He told them that “naturally” some of the excitement that infused his 2008 White House run had dissipated, but said it was still vital his backers mobilize ahead of the November vote.

“If anything, it’s more urgent and we have to be more determined and more energized and work even harder. And if we do, we’re going to have four and a half more years to change America,” he said.

Joe Goldman, a 22-year-old law student at the University of San Francisco, said he supported Obama but was disappointed the president hadn’t been able to act more decisively in his first term.

“If his administration took bolder action in the beginning, we would have seen a faster path of recovery,” he said before Obama’s arrival in San Francisco. “When it comes to education and economic policy, the president is steering us in the right direction, but it takes time.”