Former Massachusetts Gov. Mitt Romney staked his claim to the distinction of being the frontrunner for the 2012 Republican presidential nomination with a win Tuesday in Florida’s Republican primary. 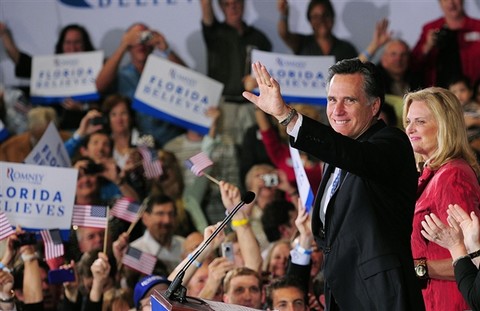 Romney, in remarks shortly after polls closed, turned his attention back to President Obama and sought to project Republican unity. Gingrich, meanwhile, defiantly vowed to carry on in his presidential bid, all the way through August’s Republican convention.

Romney’s victory reflects a rebound in his fortunes over the past 10 days, during which Gingrich had initially seemed to be charging into Florida with momentum after the Palmetto State victory. The ex-speaker seemed to emerge as a primary threat to Romney’s shot at the nomination, mostly by stoking doubts among conservatives about the former Massachusetts governor’s ideological core.

But Gingrich ran into a barrage of advertising in Florida sponsored by both the Romney campaign and a super PAC working on Romney’s behalf, which questioned the baggage Gingrich had accumulated as speaker, and pointed to the work Gingrich had done as speaker on behalf of troubled mortgage giant Freddie Mac after leaving office.

Romney made a veiled reference to the hard-fought Florida battle in his remarks, in which he sought to posture himself as the GOP’s standard-bearer.

“A competitive primary does not divide us, it prepares us. And we will win,” Romney said, adding later: “I stand ready to lead this party and to lead our nation.”

The Romney campaign and the super PAC, Restore Our Future, outspent the Gingrich campaign and a super PAC supporting the former speaker by a 4-to-1 ratio in Florida, a testament to the effectiveness of negative advertising, especially in a large, expensive state that prizes TV ads.

The contest had essentially become a two-man showdown in Florida, since Santorum and Paul – the two other remaining GOP candidates – scarcely competed in Florida, and barely spent any resources in the state.

Gingrich, in his remarks following Florida’s results, said the race would be a two-person race going forward as well.

Romney’s victory over Gingrich, though, was mostly complete, spreading most parts of the state, and he besting Gingrich among every age, race, gender and income group, according to exit poll data. Romney did particularly well with women, who made up almost half of the primary electorate, and Latinos – who, in Florida, were mostly Cuban voters.

Romney also performed well with voters who rated the economy as their top issue, and voters who named the ability to beat President Obama as the most important quality in a candidate. Both are core strengths of Romney’s candidacy, and Gingrich edged Romney in both categories in South Carolina.

But while the former Massachusetts governor beat Gingrich among self-described conservatives as a whole, but exit poll data suggest that Romney still faces challenges in winning over the most conservative elements of the GOP.

Gingrich beat Romney among “very conservative” voters in the primary, who made up about a third of the electorate. Strong supporters of the Tea Party – who composed roughly 35 percent of voters – also broke for Gingrich.

But for as much as Romney took strides to tamp down Gingrich during the last 10 days in Florida, he turned his attention back to the president in much of his victory speech.

“Together, we will build an America where ‘hope’ is a new job with a paycheck, not a faded word on an old bumper sticker,” he said.

Still, the primary battle is set to go forward, though Tuesday’s contest caps a relatively busy month for the Republican candidates, which saw Santorum eke out a victory in Iowa’s Jan. 3 caucuses, and Romney decisively win New Hampshire’s Jan. 10 primary.

The campaign is now set to enter a new phase, with a relatively dead period for candidates in the next month.

Nevada and Maine host caucuses on Saturday; Romney won in the former (which has a sizable Mormon population) in 2008. Colorado and Minnesota each hold caucuses on Feb. 7, too. Because caucuses typically favor candidates with money and organization, Romney and Ron Paul, who’s focused intently on those contests, are expected to perform best.

Those are the only nominating contests until late February, when Arizona and Michigan host its primaries. The Wolverine State is expected to strongly favor Romney — it’ where he was raised and his father served as governor.

The structure of the calendar means that Romney could work to secure a stranglehold on the race for the nomination or, if nothing else, dismiss competitors like Gingrich with the kind of relentless advertising that took its toll on the former speaker in the last week.

Gingrich has defiantly vowed to take his candidacy all the way to the Republican convention, signifying the prospect of a prolonged battle for delegates. The former speaker might have his best chance to pick up some of those delegates on March 6 — the “Super Tuesday” of the 2012 cycle, when a number of southern and more conservative-leaning states, which tend to favor Gingrich, hold their nominating contests.

Santorum commented on the results in Nevada after a town hall, arguing that the Florida results show that he — and not Gingrich — was the candidate best positioned to challenge Romney.

“We need another alternative, we need someone who doesn’t have the baggage, and the personal issues as well as the inconsistencies in policies that Newt has to be the clear alternative Mitt Romney,” he said.

The former Pennsylvania senator also took aim at Romney, promising to deliver a speech on Wednesday on “Romneycare and Obamacare.”