(Reuters) – Republican presidential hopeful Rick Santorum swept the Kansas caucuses on Saturday with 51 percent of the vote, giving him a boost going into crucial primary votes in the South next week. 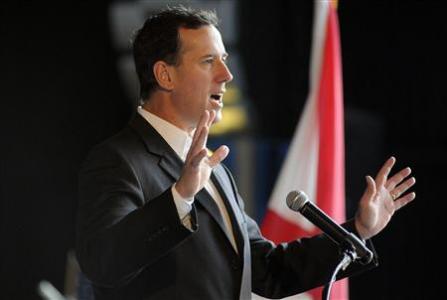 Republican presidential candidate and former U.S. Senator Rick Santorum speaks during a campaign rally at the U.S. Space and Rocket Center in Huntsville, Alabama, March 8, 2012. Santorum is campaigning in Alabama before the state's primary election on March 13, 2012. REUTERS/Billy Weeks

The conservative former senator from Pennsylvania was well ahead of former Massachusetts Governor Mitt Romney, who was at 21 percent, and former House of Representative Speaker Newt Gingrich at 14 percent.

Santorum now has some bragging rights before the more contested races next week in Alabama and Mississippi, where victories could solidify his status as the conservative alternative to front-runner Romney.

The value for Santorum of winning Kansas “is in not dropping the ball,” said Ruy Teixeira, political analyst at the liberal Center for American Progress.

The Republican race to become the nominee to face President Barack Obama in November’s general election could come down to a two-man fight between Santorum and Romney.

Victories in Alabama and Mississippi for Santorum could knock out Gingrich, who is fighting to stay in the race and will face increased calls to drop out if he fails to make a mark in those Southern primaries. Gingrich’s home state is Georgia.

A staunch opponent of abortion and gay rights, Santorum’s conservative message was welcomed in the Midwestern state of Kansas where he campaigned more than any other candidate.

In Ozawkie, a town of 645 that attracted many from the surrounding farm country on caucuses day, Santorum was clearly sweeping the vote. Local party leaders noted his lead as they were counting up the ballots with red stickers.

Santorum won 33 of the 40 Kansas delegates, and Romney the other seven, according to unofficial results from the Kansas Republican Party.

Romney described Tuesday’s Southern primaries as an “away game” for him and has been concentrating on a longer-term search for delegates.

Taking the fight for the White House far into the Pacific Ocean, Romney quietly picked up more delegates over the weekend. He won all nine delegates in the U.S. territory of Guam and nine in the U.S. commonwealth of the Northern Mariana Islands, nearly 8,000 miles from Washington.

CNN reported that Romney also won four of the six delegates awarded in the U.S. Virgin Islands caucuses on Saturday, in addition to three he was previously allocated.

Candidates need to win 1,144 delegates to clinch the presidential nomination at the party’s national convention in Tampa, Florida, in August. Romney is well ahead with more than 400.

Romney was also harvesting delegates in Wyoming on Saturday. He won seven of the 12 at stake, Santorum won three and Paul won one, The Washington Post said. One delegate was uncommitted.

Although he was well behind in Kansas, Romney can take some heart from his second-place finish. His business credentials as head of Bain Capital private-equity firm in the 1990s impressed some.

“I think the problem with modern conservatives … they just say less government is better. I’m more interested in, ‘Let’s get the government to work better,'” said Jon Marburger, 32, a civil engineer from Topeka.

“Romney’s probably more of that mold. He knows business,” he said.