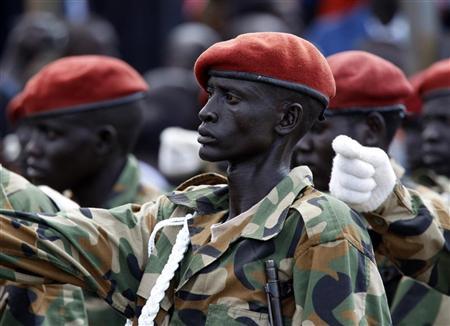 Both the United States and United Nations called on the countries to halt the violence – the worst seen since South Sudan declared independence from Sudan in July, taking most of the country’s known crude reserves with it.

South Sudan accused Sudan of bombing major oil fields and other areas on its side of the border on Monday and Tuesday. Sudan denied the air raids but said southern troops started the fighting by attacking Heglig, one of the major oilfields left on the Sudanese side of the border since the split.

“The Secretary-General (Ban Ki-moon) has expressed his deep concern about these military clashes and urged the parties to utilize to the fullest extent existing political and security mechanisms to peacefully address their differences,” Ban’s office said in a statement.

Both governments were due to meet in Addis Ababa on March 30, the United Nations said.

A Reuters reporter taken on a Sudanese government tour of the Heglig oil field near the border saw no signs of fighting on Wednesday, but there was a heavy security presence. Soldiers and machine gun-mounted Toyota pickup trucks patrolled the area.

“The area of Heglig and the surroundings are totally secure,” Heglig area commander Bashir Meki told reporters. “We are ready (to defend our country),” he said, as dozens of soldiers shouted “Allahu Akbar” (God is greatest).

The fighting was fuelled by a festering row between the two countries over the position of their shared border, the ownership of disputed territories, and how much the landlocked south should pay to transport its oil through Sudan.

South Sudan secures its independence under a 2005 peace deal that ended decades of civil war with Khartoum. Analysts fear a return to full-blown war.

Three dead men lay next to a burned-out truck at the site of one of the battles at Heglig. Sudanese soldiers identified the three as SPLA fighters.

“Sixty more soldiers were killed at a power station which the SPLA had taken temporarily,” one Sudanese soldier said.

A gutted tank and two military 4x4s were left on the main road from the airport to Heglig’s vast oil facilities.

“The enemy left Sudan. Not a single southern soldier is left on Sudanese soil,” said General Abdel-Monem Saad, deputy chief of staff for military operations at the Sudanese army.

The southern army (SPLA) earlier said it had first crossed the border to Heglig as it pushed Sudanese soldiers out of its territory.

“We declared disengagement and our forces have pulled back from Heglig,” SPLA spokesman Philip Aguer said on Wednesday.

South Sudan has shut down its production of 350,000 barrels per day to stop Sudan taking oil for what the Khartoum government calls unpaid fees. Much of the oil is exported to China.

“WE WILL DEFEND THIS BORDER”

Heglig contains a large oil field on Sudan’s side of the border which Khartoum needs to keep its economy running after it lost three-quarters of its oil with the South’s secession.

The oil field, which pumps around half of Sudan’s 115,000 barrels per day of oil output, was awarded to Khartoum under a ruling by the Permanent Court of Arbitration in The Hague in 2009, but parts of the border area remain disputed.

In Heglig, paramilitary units including men from the local Misseriya tribe, which is allied to Khartoum, patrolled the area.

“We will defend this border, even without permission from the government, the United Nations, from anybody,” Ismail Hamdien, a Misseriya leader, said. “We don’t want President Bashir to go to (Sudan Sudan’s capital) Juba.”

Sudan’s President Omar Hassan al-Bashir was due to visit South Sudan in April to meet his southern counterpart Salva Kiir to try and resolve their dispute, but cancelled the trip after the violence.

Smoke still rose from a scorched oil workers’ housing complex located next to an oil well further down the road.

One Chinese oil worker dressed in a blue overall said the workers were still frightened. “We are afraid. This is terrible. We can’t work here if we don’t get protected. They destroyed residence buildings,” he said.

When asked whether he thought the fighting was over he said: “I am not sure.”