(Reuters) – The United States expressed alarm that its protégés in the Egyptian army were abusing hopes for democracy by ordering more military rule just as the Muslim Brotherhood was claiming victory in the country’s first free presidential election. 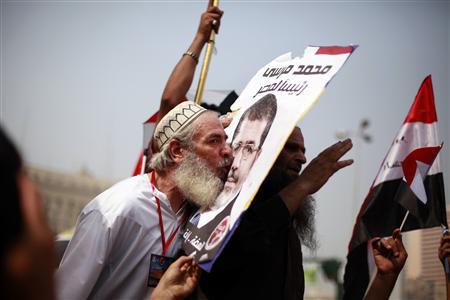 A supporter of the Muslim Brotherhood’s presidential candidate Mohamed Morsy kisses a picture of him during a celebration at Tahrir square in Cairo June 18, 2012. The Muslim Brotherhood’s Mohamed Morsy said on Monday after his group declared him winner in a presidential race that he would be a president for all Egyptians and said he would not “seek revenge or settle scores.” REUTERS/Suhaib Salem

The Islamists’ self-assurance was contested by the other candidate in the run-off race, a former general who was prime minister when Hosni Mubarak was ousted last year by an army anxious to save itself from the revolution in the streets.

But there was still no result from the two-day poll, although independent officials privately spoke of a likely win for Islamist Mohamed Morsy over military man Ahmed Shafik.

Yet whatever the outcome – and one electoral supervisor said it might not be announced until Thursday – the new president was shorn in advance of much of his power by a decree issued by the ruling Supreme Council of the Armed Forces (SCAF) just as polling stations closed and two days after it had dissolved a new, Islamist-led parliament.

In protest, the liberal urban youth movements which were in the vanguard of protests at Cairo’s Tahrir Square 16 months ago, as well as the Brotherhood and other supporters of the uprising, plan a major demonstration there later on Tuesday.

“This decree just makes plain the hegemony of SCAF,” said Khaled Ali, a liberal lawyer eliminated in the first round of voting. “This decree strips the president of the powers he was elected to have and gives those to the military council.”

The constitutional declaration, one more twist in Egypt’s halting progress toward democracy since the Arab Spring, effectively means that a July 1 deadline promised for a handover to civilian rule has been reduced to semantics, since the new civilian president looks to be very close to powerless.

Liberals and Islamists called it a “military coup”.

Washington, which only in March agreed to hand over $1.3 billion in annual aid to the biggest army in the Middle East, was far from pleased – not least, it seemed, because the man in charge of the council, Field Marshal Hussein Tantawi, failed to mention his plan when assuring Defense Secretary Leon Panetta on Friday that the target date for civilian rule would be met.

“We are deeply concerned about the new amendments to the constitutional declaration, including the timing of their announcement as polls were closing,” a Pentagon spokesman said, adding that he did not think Tantawi had alerted Panetta when they spoke.

“We believe Egypt’s transition must continue and that Egypt is made stronger and more stable by a successful transition to democracy,” spokesman George Little said. “We support the Egyptian people in their expectation that the (SCAF) will transfer full power to a democratically elected civilian government, as the SCAF previously announced.”

Egyptian democracy was relatively low among U.S. priorities during the 30-odd years Washington was funneling aid and arms to a Cold War ally which led Arab peace moves toward Israel in 1979 and was later fighting a common enemy in militant Islam.

But since Egyptians rose up to end six decades of military rule, U.S. leaders have pledged to support them, even if that means accepting a role for the Brotherhood, a long-suppressed movement that wants Islamic law and which spawned offshoots such as the militant Palestinian Hamas movement across the Middle East.

Washington may have limited room for leverage on Tantawi, a familiar figure to U.S. commanders after his 20 years as Mubarak’s defense minister. Little said the Pentagon wanted such close relations to continue and there was no mention of possible sanctions. “We’re going to monitor events closely,” he said.

The SCAF announced the new regulations in its role as guardian of a revolution which some of its standard-bearers now fear has fallen victim to a deadlock between the army and religion which has characterized Egypt since colonial times.

The president, whose powers had not previously been defined following the suspension of constitutional provisions used in the Mubarak era, can only appoint a government whose every law must be endorsed by SCAF, which has taken back the legislative powers it had passed to a new parliament elected in January.

A new timetable set down for writing a constitution, passing it by referendum and then electing a parliament could leave Tantawi in charge until 2013, according to the legal text.

Morsy attracted support from many who reject his religious agenda and the imposition of Islamic law but wanted to bar the way to Shafik, 70, whom they see as the heir to the old regime.

As Islamists cheered, unemployed Mohamed Mahmoud, 28, did not share their joy: “I voted for Morsy but I can’t say I’m happy,” he said. “I’m still afraid of both and what they may do.

“I don’t want an Islamic state or a new Mubarak state.”

The order indicated that the army, which controls swathes of Egypt’s economy, has no intention of handing substantial power to its old Islamist adversary and may be hoping that public disillusionment with the Brotherhood’s performance will reduce its influence on the new constitution and the next parliament.

Israel fears growing hostility in Cairo and said on Monday an Israeli and two militants were killed in an attack on its Sinai desert border where the Jewish states is building a fence.

“We can see a disturbing deterioration in Egypt’s control of the Sinai’s security,” Israeli Defense Minister Ehud Barak said.

“Whoever wins, we expect him to take responsibility over all of Egypt’s international commitments, including the peace treaty with Israel and security arrangements in the Sinai, and to put an end to these attacks swiftly.”

Morsy, though allied with figures who call for Israel’s destruction, has said he would respect Egypt’s treaty with the Jewish state, on which much of Cairo’s U.S. aid depends.

The Brotherhood has contested the army’s power to dissolve the present parliament. It has warned of “dangerous days” ahead.

But few see the Islamists, who hung back at the start of the revolt, launching a violent grab for power soon.

The failure of the parliament to draft a constitution – liberals accused the Islamists of religious zealotry – has left SCAF warning it may step in. Some lawmakers from the dissolved assembly, defying an army ban on entering the parliament building, met there to debate a new constitution on Monday.

But many expect SCAF to name its own drafting panel soon. It has also formed a new National Defense Council, to include the civilian president, but on which soldiers have a majority. 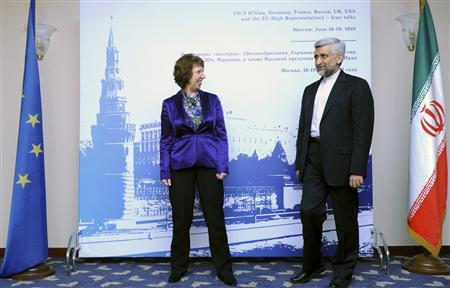 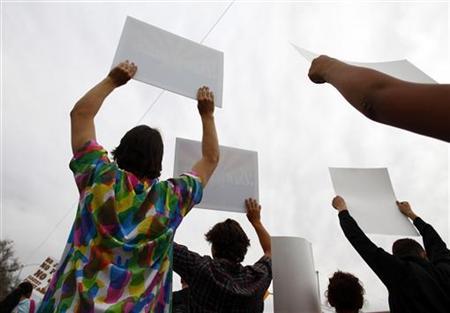