Nadal pulls out of U.S. Open with injury

(Reuters) – Rafael Nadal withdrew from the U.S. Open on Wednesday increasing concerns about the seriousness of the knee injury plaguing the 11-times grand slam winner. 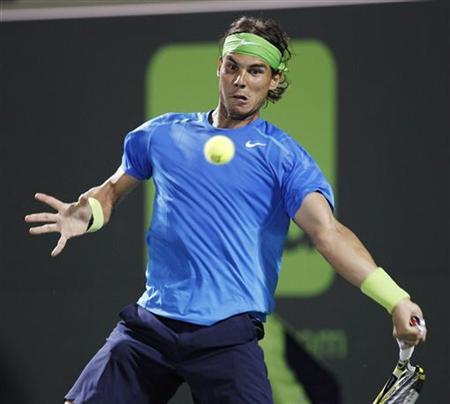 The Spanish world number three has not played since suffering a shock second-round defeat by lowly ranked Czech Lukas Rosol at Wimbledon in June.

Nadal missed the London Olympics because of a recurrence of tendinitis in his knees and subsequently withdrew from ATP Tour events in Toronto and Cincinnati.

“I am very sad to announce that I am still not ready to play,” Nadal, the 2010 U.S. Open champion, said in a statement.

“I am sorry since I always found great crowds and great support, but I have to continue with my recuperation and preparation to be ready to play in the right conditions.”

Nadal’s absence from the Cincinnati tournament had already raised alarms in some quarters.

“I was going to write him and check on him because I can’t believe he’s been out that long,” world number one Roger Federer said earlier this week.

“I thought the Olympics, okay, that’s fine. That’s a personal choice. I thought for sure we would see him in Toronto, but now he missed Toronto and Cincinnati.

“It’s very surprising, because it was nothing that we heard of prior to the injury. So I’m sad for him,” added Federer.

Nadal, whose aggressive and physical style has delighted crowds, has had frequent problems with both his knees.

The tendinitis first arose when he pulled out of the 2008 Tennis Masters Cup, citing the problem in his knee and a year later the same complaint led to him missing the chance to defend his title at Wimbledon.

Knee injury forced him to withdraw from the Australian Open in 2010 and in March of this year he had to pull out of a semi-final clash with Andy Murray at the Sony Ericsson Open in Miami due to a knee problem.

The next big date for Nadal is the semi-final of the Davis Cup when Spain take on the United States in Gijon on September 14.

“We hope to see him back on the court soon and look forward to his return to New York next year.” U.S. Open tournament director David Brewer said in a statement.

The U.S. Open in New York runs from August 27 to September 9.

It could change, but Howard expected back with Lakers
South African Olympic mountain biker killed in accident
How much will Arsenal miss Fabregas upon his return to the Emirates?
Venus advances to semis at Pan Pacific Open
No. 3 Clemson pulls talent from Sunshine State
Arsenal's Abou Diaby to undergo cruciate knee ligament surgery and is out until next March
Durant helps Thunder rally past Bulls
Bears' defense feasts on Lions

Nadal pulls out of U.S. Open with injury