NEW DELHI (AP) — India triumphed in its first interplanetary mission, placing a satellite into orbit around Mars on Wednesday and catapulting the country into an elite club of deep-space explorers. 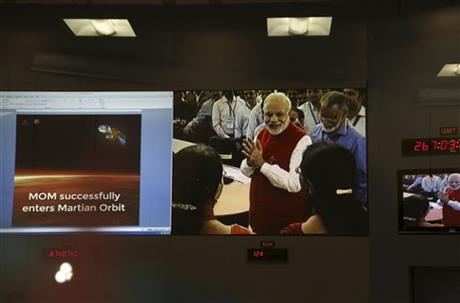 In scenes broadcast live on Indian TV, scientists broke into wild cheers as the orbiter’s engines completed 24 minutes of burn time to maneuver the spacecraft into its designated place around the red planet.

We have gone beyond the boundaries of human enterprise and innovation, Prime Minister Narendra Modi said in a live broadcast from the Indian Space and Research Organisation’s command center in the southern tech hub of Bangalore.

We have navigated our craft through a route known to very few, Modi said, congratulating the scientists and all my fellow Indians on this historic occasion. 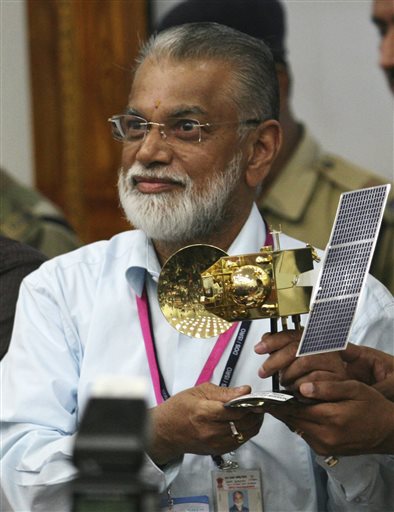 FILE – In this Nov. 5, 2013 file photo, Indian Space and Research Organization Chairman, K. Radhakrishnan, poses for the media with a model of the Mars orbiter after its successful launch at Sriharikota, India. With home-grown technology and a remarkably low budget of about $75 million, India could become the first nation to conduct a successful Mars mission on its first try. If the Mars Orbiter Mission, or MOM, settles into orbit in the morning, Wednesday, Sept. 24, 2014 as planned, the country will join the U.S., European Space Agency and the former Soviet Union in the elite club of Martian explorers. (AP Photo/Arun Sankar K, File)

Scientists described the final stages of the Mars Orbiter Mission, affectionately nicknamed MOM, as flawless. The success marks a milestone for the space program in demonstrating that it can conduct complex missions and act as a global launch pad for commercial, navigational and research satellites.

Reaching the fourth planet from the sun is a major feat for the developing country of 1.2 billion people, most of whom are poor. At the same time, India has a robust scientific and technical educational system that has produced millions of software programmers, engineers and doctors.

India describes MOM as the first successful Mars mission on a maiden attempt by any country, although the European Space Agency, a consortium of several nations, also did it on its first Mars mission in 2003.

Rival China is also expanding its space exploration program with a space lab that is in orbit before a future permanent space station is established. It also landed a rover on the moon late last year, but has not sent a satellite to Mars.

Astronomy students who gathered at the Nehru Planetarium in New Delhi for Mars-themed learning activities and games were elated by the mission’s success.

I am proud to be born in a country that can do anything and succeed, said Kashish, 12, who uses only one name.

Another 12-year-old, Mansha Khanna, said she was so inspired she wanted to become a scientist or an astronaut, and do research about other planets.

Getting a spaceship successfully into orbit around Mars is no easy task. More than half the world’s previous attempts — 23 out of 41 missions — have failed. India wanted this spacecraft, also called Mangalyaan, meaning Mars craft in Hindi, to be a global advertisement for its ability in designing, planning and managing a difficult, deep-space mission.

India has already conducted dozens of successful satellite launches, including sending up the Chandrayaan-1 lunar orbiter, which discovered key evidence of water on the moon in 2008. And it plans new scientific missions, including putting a rover on the moon.

But India is likely to be somewhat limited because we can’t afford to spend that much money in pure science exploration and in an exercise of the imagination, said D. Raghunandan of the Delhi Science Forum, a group that promotes the study of science.

The space agency’s focus will remain on developing technologies for commercial and navigational satellite applications — services that could bring in significant revenues from companies or governments seeking to place their own satellites or research equipment in space.

U.S. space agency NASA, which has conducted 15 successful missions to Mars, including a spacecraft that arrived in orbit on Sunday, congratulated India in a Twitter message welcoming MOM to studying the red planet.

India’s 1,350-kilogram (nearly 3,000-pound) orbiter will now circle the planet for at least six months, with solar-powered instruments gathering scientific data that may shed light on Martian weather systems as well as what happened to the water that is believed to have existed once on Mars.

It also will search Mars for methane, a key chemical in life processes on Earth that could also come from geological processes. None of the instruments will send back enough data to answer these questions definitively, but experts say the data will help them better understand how planets form and what conditions might make life possible.

It’s yet another source of information. Mars is gradually unveiling its secrets to science and humanity, and the Indian mission is yet another means of unveiling this enigma that Mars presents, said space expert Roger Franzen, the technical program manager at the Australian National University’s Research School of Astronomy and Astrophysics.

Scientists said it was helpful that MOM’s data will reflect the same time period as data being collected by NASA’s newest Maven mission, allowing the two data sets to be compared for better understanding.

The U.S. has two more satellites circling the planet at the moment, as well as two rovers rolling across the rocky Martian surface.

India was particularly proud that MOM was developed with homegrown technology and for a bargain price of about $75 million — a cost that Modi quipped was lower than many Hollywood movie budgets. NASA’s much larger Maven mission cost nearly 10 times as much, at $671 million.

Today not only has a dream come true, but we have created history for India, for ISRO, and for the world, said Vipparthi Adimurthy of the Indian Institute of Space Science and Technology.

AP writers Nirmala George in New Delhi and Kristen Gelineau in Sydney contributed to this report. 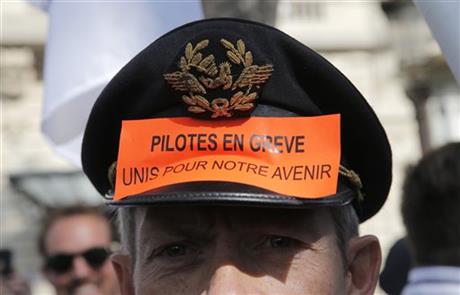 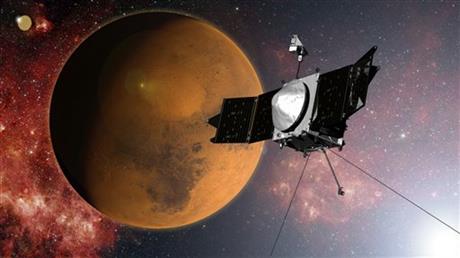