(Reuters) – Jeremy Lin coughed up nine turnovers in his first defeat as a New York Knicks starter with the lowly New Orleans Hornets claiming a surprise 89-85 victory at a sold-out Madison Square Garden on Friday. 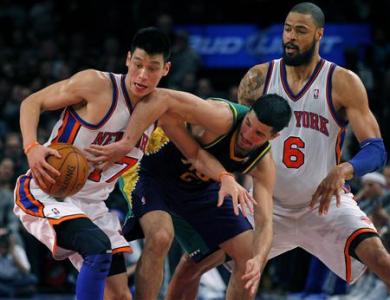 ‘Linsanity’ has gripped America and spread throughout Asia as the Chinese-American guard, rejected by a string of NBA teams, became the unlikely driving force behind the Knicks’ seven consecutive wins.

However, that run came to an end on Friday as the 23-year-old Harvard graduate turned in a season high turnover rate.

“Nine turnovers is obviously never gonna get it done from your primary ball-handler,” Lin, who scored a joint team-high 26 points, told reporters.

“It’s on me in terms of taking care of the ball and the game in general. If everyone’s going to credit me for these last seven games, then I definitely deserve this one. So that’s fine by me.”

The Knicks fell to 15-16 for the season while the victory was the Hornets’ seventh this season against 23 defeats.

The Hornets capitalized on Lin’s five first quarter turnovers to build a 27-13 lead and led wire to wire. The Knicks rallied to within two points at 82-80 on two free throws by Lin with one minute remaining but could not complete the comeback.

Although disappointed by defeat, Lin hoped that the hysteria surrounding him might dampen for the good of the team now the winning streak had ended.

“I don’t think this is good, because I hate losing.” Lin said. “But I know what you’re saying in terms of everything dying down a little bit.

Knicks coach Mike D’Antoni said he was pleased with how Lin responded in the second half after he recorded eight of his nine turnovers in the first.

“That’ll happen for young guys. “He’ll learn. He’ll get through it. I thought he played well. Second half, he adjusted.”

Lin was given his chance to play because of injuries and the struggling form of the Knicks, who were 8-15 before he took charge on the floor in the absence of their two top scorers, Carmelo Anthony and Amar’e Stoudemire.

The winning run included scoring 38 points in victory over Kobe Bryant and the Los Angeles Lakers and dropping a game winning three-pointer with one second remaining to beat the Toronto Raptors.

However, many Knicks fans missed those efforts.

Friday’s game was the first Knicks outing to be aired to more than one million TV viewers in New York after a month and a half blackout for Time Warner Cable Inc subscribers.

They will be hoping for better from their talisman when the Knicks host the NBA champion Dallas Mavericks on Sunday.

(Reporting by Mike Mouat in Windsor, Ontario. Editing by Patrick Johnston. To query or comment on this story email sportsfeedback@thomsonreuters.com)