Sarah Palin and Katie Couric on

That may be the main message we

why the networks set this up. ABC thinks showcasing its latest hot hire all week might push “GMA” past “Today.” NBC hopes

Palin’s one-day visit will bring enough of her posse, plus curiosity-seekers, to fend off that challenge.

Who knows? In the end, the numbers are network bean-counter stuff.

What we can say is that Palin, who was billed as a

co-host but really was more of an extended guest, played her role smartly. Couric made it a little more about Katie, but she

knows the morning game. She makes two hours slide down like a latte.

What’s interesting in the broader picture is what

these gigs say about where two of the best-known, most ambitious and most polarizing women in the modern politics-and-media

Katie and Sarah don’t leave a lot of people in the middle. You love ’em or you hate

They both know that, too, and while they have benefited from it — passion always beats indifference — their game

From the moment she hit the national

stage in 2008 as John McCain’s surprise

When true conservative believers want red meat, she delivers. She’s in such demand as a firebrand and

energizer that she quit the Alaska governorship to do it full-time.

But it was a different Palin who showed up Tuesday

It’s not that she backed off on her ideology. She plugged the “marketplace” and got in swipes at the

“lamestream media” and Hollywood, favorite targets of those who think America has lost its way.

she was talking to millions of people who don’t attend political rallies. This was a place to show off a mom who’s proud of

her kids, who applauds the entrepreneurial spirit of an ideological opposite like Oprah Winfrey and who can admire Tori Spelling’s stylings for hors d’oeuvres at a fancy Hollywood

Palin smiled, used her indoor voice and generally joined the lighthearted banter, some of it self-deprecating,

that sets the morning show mood.

“GMA,” dusting off the upbeat, chatty and bemused persona that worked so well for her over 15 years at “Today.”

This isn’t the Katie who pressed Palin during their famous 2008 presidential campaign interview, who

Before Katie starts her daytime talk show on ABC later this year, she wants to be sure we know she’s having

And that there’s no reason to be afraid. 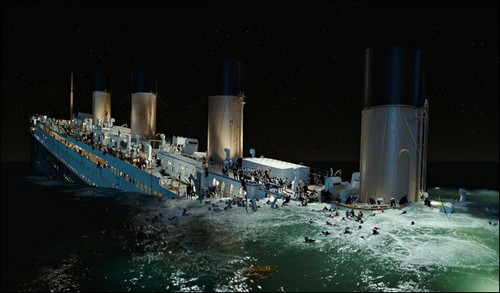 Celebrity ‘Titanic’ is even more spectacular in …