It’s worth re-visiting the sinking ship.

To coincide with the 100th

Cameron has re-released his game-changing 1997 seafaring behemoth and added another dimension. The story remains the

same, but the dizzying visuals are even more spectacular and the tension ratchets up several notches with the film’s

Fifteen years have elapsed since Cameron married his conventional tale

of star-crossed lovers to the prolonged and indelible sinking of the Titanic. By taking a two-dimensional film and superbly

converting it to 3-D, the veering of the massive ship as it takes a dramatic nosedive is supremely unnerving.

the true story of the grand ship’s destruction, with fictional tales intertwined, Titanic (*** out of four, opens

Wednesday) is the most meticulously rendered and relentless disaster movie ever made. Unlike many 3-D films that have a dark,

muddy quality, Titanic‘s images are sharper and the ship’s nearly vertical inundation and breaking in two

following its collision with an iceberg are all the more gut-wrenching.

While the sentimental shipboard romance

it’s the sea water slamming through corridors that will likely sell tickets. The contrasting images of desperately trapped

While the revamp underscores Cameron’s technical virtuosity, nobody would confuse him with a savvy

(Would the well-bred Rose really flip the bird to her fiancee’s valet? Was that a gesture even used 100 years ago?) And

Titanic still needs more judicious editing — the story takes a while to get going and too long to conclude, with at

least three scenes that could have served as viable endings.

who scoffs at Picasso’s artistry and plans to marry Rose in order to control her. But the love story of Rose and Jack feels

a bit sweeter, perhaps because of the surplus of forgettable screen romances that have hit theaters in the intervening years.

Sure, it’s corny, but there’s something endearing about the tale of young love and its earnest lack of irony.

Thomas Andrews, Kathy Bates as the outspoken Molly Brown and, particularly, the lovely Gloria Stuart as

The ship looks all the more sumptuous with the

added dimension. The scene where Jack rescues Rose from jumping overboard comes off as more perilous and intimately revealing

in 3-D. Three dimensions enhance the drama of a rupturing hull and the horror of people sliding helplessly across the massive

deck, falling into the ocean or desperately trying to clamber aboard too-few lifeboats.

best, ironically, when the storied ship is torn asunder. 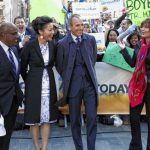 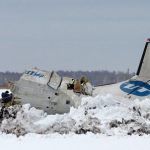 ‘Titanic’ is even more spectacular in 3-D 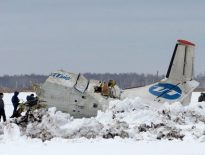 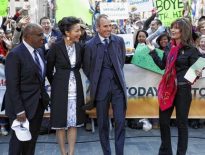