ALGIERS (Reuters) – Mali’s Tuareg-led rebels signed a preliminary peace agreement with the government on Thursday as a gesture of good faith to end decades of separatist fighting, but wanted more guarantees before signing a final accord. 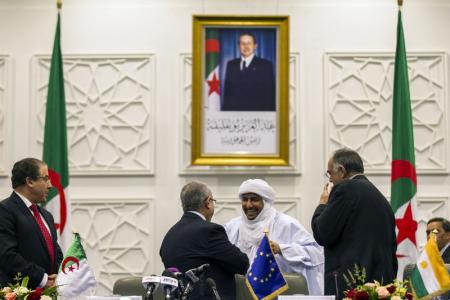 Foreign Minister of Algeria Ramtane Lamamra congratulates Bilal Agh Cherif (C, R), secretary general of The Coordination of the Movements of Azawad (CMA), after Cherif signed a preliminary peace agreement in Algiers, Algeria May 14, 2015. Mali’s Tuareg-led rebels signed up to a preliminary peace agreement with the government on Thursday as a step to ending decades of separatist fighting, but said they would need more guarantees before signing a final aaccord. REUTERS/Zohra Bensemra

Mali’s government accepted the United Nations- and Algerian-backed deal in March, but the Tuareg-led coalition argued that it fell short of their demands for the northern region, which they call Azawad, and sporadic fighting has continued.

Western powers want a conclusive accord, fearing turmoil will allow Islamist militants to return to the north after French military intervention drove them out.

The rebel alliance, Coordination of Azawad Movements, known by its French initials CMA, said they would still need more work on a conclusive deal. They had said this week they would not attend a final signing ceremony that had been planned for Friday in Bamako, potentially embarrassing President Ibrahim Boubacar Keita who has invited other African heads of state.

What we achieved here shows our commitment to peace, rebel leader Bilal Ag Cherif said after the signing. We have agreed on many issues, but there are certain issues pending before a final agreement with the government in Bamako.

But in a sign of the remaining challenges, CMA fighters attacked the positions of pro-government armed group Gatia in the north Malian town of Menaka, a spokesman for Gatia told Reuters. An armed battle for the town in late April delayed a previous attempt to complete the deal.

Separately, at least nine Malian soldiers were killed in an ambush by separatist rebels near the northern town of Timbuktu on Monday.

Tuaregs have risen up four times since Mali’s independence from France in 1960. Most recently, they formed an alliance with Islamist militants in 2012 to seize the desert north.

French President Francois Hollande called on all parties to sign a final agreement and ensure it was implemented sincerely, according to a statement from his office.

The Algiers document in March proposed more devolved powers for the north, a regional security force and a special development plan. But it left the question of Azawad’s political identity for a national debate between Malian parties.

Mali’s government refused full autonomy for Azawad, but said it would devolve more authority under the country’s decentralised structure. Rebels have pushed for a federal system to allow more local powers.

Implementing any peace agreement will also be complicated with various competing factions and splinters among the fighters on the ground and Islamist militants also trying to regain ground in the remote northern region.

I am aware that the reality on the ground could push some to be pessimistic, Algerian Foreign Minister Ramtane Lamamra said at the conference. We urge all to comply to the agreements signed in Algiers and stop provocations. 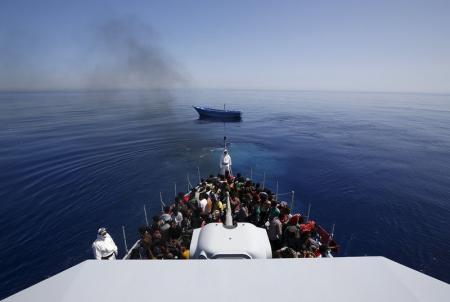 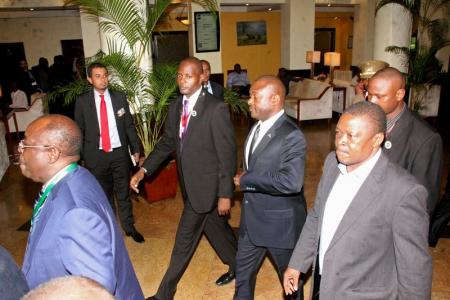