Long road ahead in U.S.-Pakistan ties after NATO deal

(Reuters) – Pakistan and the United States are set to resume broader talks on security cooperation, militant threats, aid and other issues in the wake of an agreement to reopen supply routes into Afghanistan, Pakistan’s envoy to Washington said on Thursday. 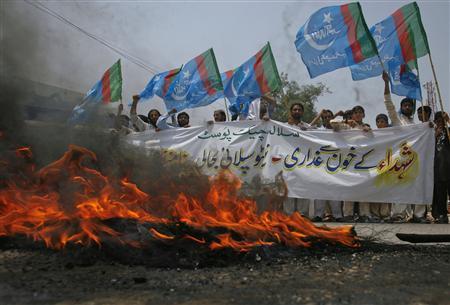 Supporters of Islami Jamiat Talaba, a student wing of Pakistan religious and political party Jamaat-e-Islami, hold their party flags as they burn tyres on the road during an anti-American demonstration in Peshawar, July 5, 2012. REUTERS/Khuram Parvez

But bridging underlying differences that strained U.S.-Pakistani ties close to the breaking point will be daunting as the allies remain at odds over how to handle the twin threats of the Taliban in Afghanistan and militants in Pakistani tribal areas.

The agreement reached this week prompting Pakistan to reopen NATO supply routes into Afghanistan, clinched when U.S. President Barack Obama’s administration ceded to months of Pakistani demands to apologize for the U.S. air attack that killed 24 Pakistani soldiers last November, was a relief for both countries.

“I certainly think it opened the door to many other issues,” Ambassador Sherry Rehman told Reuters in an interview.

“There’s a long road ahead, but both sides can use this opportunity to build a path to durable ties,” she added.

This was a boon for NATO nations that had been paying 2-1/2 times as much to bring supplies in through an alternate route.

While NATO will not pay any new fees for shipping supplies into Afghanistan, Washington will give Pakistan at least $1.2 billion owed it for costs incurred while fighting militants.

A U.S. official, speaking on condition of anonymity, said no specific commitments were made to increase military or counter-terrorism activities for Pakistan, but there was a ‘good faith agreement’ to continue talks on those issues.

ALL ABOUT THE APOLOGY

“A number of other things became stuck with all this,” the official said.

“It was never a money haggle or a transactional deal,” Rehman said, speaking during a visit to Islamabad where she helped usher in the arrangement ending the months-long deadlock.

The death of the 24 soldiers inflamed public opinion among Pakistanis already angered by U.S. drone strikes, the presence of CIA personnel in Pakistan and other issues.

“We’re a very hospitable people but we don’t like being taken for granted – that was the public sentiment,” she said, stressing why the apology was so vital.

“You had 24 boys draped in flags … that’s not something that was going away from the public domain. At every level this percolated up and down” Pakistani society.

While the breakthrough is welcome news for both sides, a harmonious road ahead is unlikely.

Issues that have inflamed bilateral ties persist, including U.S. accusations that Pakistan harbors militants and meddles in Afghanistan, Pakistani chafing at U.S. drone strikes and fears on both sides that Pakistan’s western neighbor will revert to chaos after most NATO troops leave by the end of 2014.

Pakistan has long complained that the United States has overlooked its contribution to the fight against militants – scores of al Qaeda fighters were apprehended in Pakistan with American help – and the threat Pakistanis themselves face.

Late last month, more than 100 fighters loyal to Pakistani Taliban leader Fazlullah snuck across the Afghan border and staged an ambush inside Pakistan.

Several days later, the fighters released a video of what they said were the heads of 17 ambushed soldiers, along with their identification cards.

It was a chilling reminder of the threat militants based in Afghanistan pose to Pakistan – the mirror image of the situation that fuels U.S. complaints about Pakistan, and a threat that would be sure to become more serious if Afghanistan were to slip back into civil war.

The United States repeatedly has pressed Pakistan to pursue the Taliban and its allies, especially the Haqqani network, which it blames for a series of high-profile attacks in Afghanistan.

Last month, U.S. Defense Secretary Leon Panetta said the United States was reaching the limits of its patience with Pakistan over what it deems as foot-dragging on militants.

Rehman said that most of al Qaeda has been decimated with Pakistani cooperation, and that Islamabad would go after foreign fighters linked to other militants according to “Pakistan’s priorities” and time frame.

The immediate military priority was combating insurgents who target Pakistani security forces and civilians, she said.

“We are going after our own right now – foreign fighters and militants who are on our soil, who are attacking us. If there is someone beheading me I am going to go after him first.”

Rehman said Pakistan stood to pay a high price if the NATO project in Afghanistan does not produce a stable country, in part because instability is likely to spill over the two countries’ porous border.

“For Pakistan, the stakes in Afghan stability are very high,” Rehman said.

Long road ahead in U.S.-Pakistan ties after NATO deal 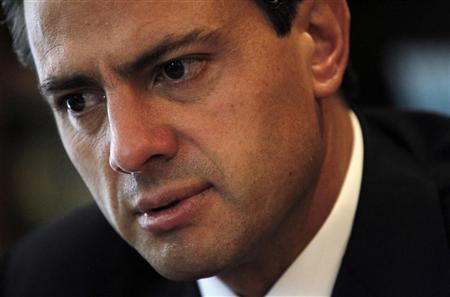 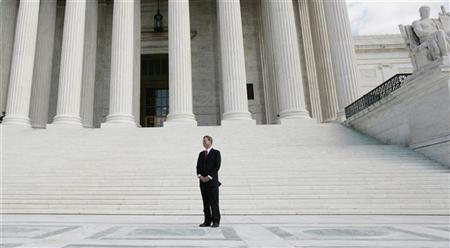