(Reuters) – The neighborhood watch volunteer who sparked a national uproar by shooting an unarmed teenager to death has wept with remorse over the killing and now fears for his own life, a friend of the gunman and a legal adviser said on Sunday. 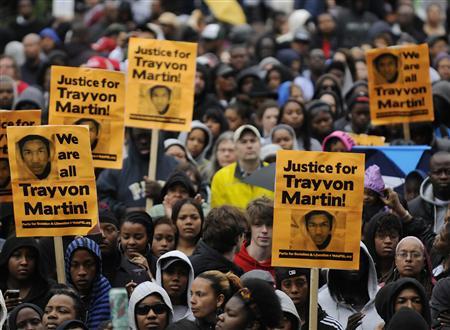 People gather at a "Stand Up for Trayvon Martin" rally in Washington March 24, 2012. REUTERS/Jonathan Ernst

Supporters of the boy and his family staged more protest rallies and prayer vigils across the country, many dressed in “hoodies,” or hooded sweatshirts, like the one Trayvon Martin, 17, was wearing when he was gunned down last month.

His admitted assailant, George Zimmerman, 28, remained in seclusion after receiving death threats and learning of a $10,000 bounty offered by a group called the New Black Panther Party, said lawyer Craig Sonner, who added he would represent Zimmerman if charges were filed.

Zimmerman, a white Hispanic, has said he acted in self-defense when he shot Martin, who was black, in a gated community in Sanford, Florida, near Orlando, despite an apparent lack of evidence the teenager posed any threat.

The boy’s February 26 death, which drew little attention at first, has grown into a rallying cry for African-Americans pointing to his shooting and the decision by authorities not to prosecute Zimmerman as a blatant case of racial injustice.

The shooting also has provoked a heated debate over “Stand Your Ground” laws enacted in Florida and other states and cited by Sanford police as the reason Zimmerman has not been arrested. Florida’s law allows people to use deadly force in self-defense.

President Barack Obama weighed in on the situation on Friday, calling the shooting a “tragedy” and saying, “If I had a son, he’d look like Trayvon.”

A longtime friend of Zimmerman, Joe Oliver, 53, a former television news reporter who is himself black, came to Zimmerman’s defense on Sunday, denying his friend was a racist and saying Zimmerman cried for days over the shooting.

“He’s a caring human being,” Oliver told Reuters in a telephone interview. “I mean, he took a man’s life and he has no idea what to do about it. He’s extremely remorseful about it.”

He also suggested there was more to the story than had yet been disclosed.

“There are huge gaps that are being filled in and interpreted without evidence,” he said.

Late on Sunday afternoon in Sanford, about 100 people held a prayer vigil at the gate to the subdivision where the shooting occurred, quietly singing the civil rights anthem “We Shall Overcome.”

Carolyn Skene, 52, a Canadian artist who has been renting a home in the neighborhood where Martin was shot and who attended the vigil, said someone like Zimmerman would have been arrested in her country. “We just can’t believe your laws,” she said.

Civil rights leader and former presidential candidate Jesse Jackson was expected to attend a larger rally planned for Monday in Sanford before the city commission meets to discuss the case.

Earlier in the day at Middle Collegiate Church in New York, the minister and members of the congregation wore hoodies, pulling their hoods over their heads during prayers at a crowded service that made repeated reference to the shooting as a symptom of the discrimination felt by young black Americans.

Jacqui Lewis, the church’s senior minister, gave a sermon in which she said people were “fed up with centuries of race-related hatred and fear in this country.”

She asked congregants to mail packets of Skittles candy to the Sanford Police Department and post pictures of themselves on the Internet wearing their hoodies and holding signs saying: “I am not dangerous. Racism is.”

Martin was carrying a bag of Skittles and an iced tea when he was confronted by Zimmerman, a neighborhood watch captain who later told police he believed the youth looked suspicious.

In Seattle, hundreds packed the Greater Mount Baker Baptist Church in a “Rally for Trayvon.” Many of the protesters, some wearing hooded sweatshirts, carried bags of Skittles and cans of iced tea as they later marched a mile to a city park named for slain civil rights leader Martin Luther King Jr.

U.S. Senator Charles Schumer called on Sunday for a Justice Department investigation into “Stand Your Ground” laws, adopted first by Florida in 2005 and by at least 16 other states since, to determine if they had led to a rise in gun violence or had hindered prosecutions.

“They’re all new. They’ve been passed very, very quickly and I think the states who passed them, if they find out the real facts, they may decide to repeal them,” Schumer said on CBS’ “Face the Nation.”

Republican presidential candidate Rick Santorum called the shooting “a heinous act” during an appearance on “Face the Nation.”

“We need to focus on being there to be supportive and for the family that’s going through this tragedy,” he said.

Sonner said Zimmerman feared he was in danger. He cited a document circulating that bears Zimmerman’s photo with the words “Wanted Dead or Alive.”

Sonner has also said Zimmerman suffered a broken nose, a gash to his head and had grass stains on his shirt after the confrontation with Martin.

(Reporting by David Bailey in Minneapolis and Jonathan Allen in New York, Writing by Steve Gorman and Ellen Wulfhorst; Editing by Peter Cooney)