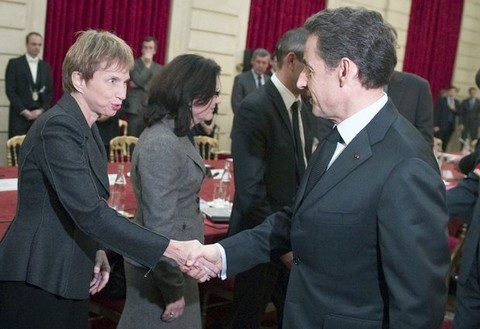 Critics accuse the unpopular conservative leader of offering last-minute remedies to bring down an unemployment rate that is close to 10 percent. He counters that a broad economic and financial crisis requires changes now.

France, a pillar of the eurozone, has been in the spotlight after Standard & Poor’s on Friday downgraded French sovereign debt from its decades-long perch at the top level — triple-A. That raised new doubts about whether the currency union will get its fiscal house in order.

“The current economic situation in France as in Europe is very perilous. It’s urgent,” Sarkozy said in the opening remarks of the closed-door session, according to a transcript made public by his office.

Sarkozy said French labor costs have risen 20 percent between 2000 and 2009, compared to 7 percent in Germany. He said the relative cost faced by employers for a worker who earns a gross monthly salary of €2,500 ($3,200) was twice as high in France than in Germany.

He also defended one of his main ideas in recent months: to help businesses by reducing the cost to employers of health or pension benefits — and raising the sales tax to offset the cost of those reductions.

France’s hard-charging labor leaders dug in their heels against that because it would shift some of the burden of paying for generous social benefits from businesses to all consumers — including workers.

Labor unions insist workers shouldn’t have to pay the cost of the financial crisis at a time when many French companies are still making profits, and accuse Sarkozy of putting together a slap-dash solution ahead of elections.

“You don’t address the question of financing the social safety net in two shakes, just like that, in three weeks,” Jean-Claude Mailly, head of Workers’ Force labor union, told i-Tele TV before attending the meeting.

Sarkozy has been lagging in the polls behind Socialist nominee Francois Hollande ahead of the two-round presidential election in April and May.