AMSTERDAM (Reuters) – The U.N. war crimes court trying Charles Taylor for atrocities in Sierra Leone said on Thursday it will deliver a verdict on April 26, nearly five years after the former Liberian president went on trial in the Netherlands. 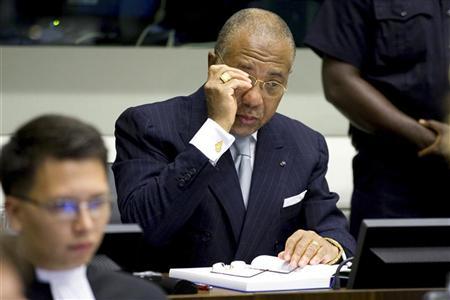 Taylor, the first African leader to go before an international tribunal, faced 11 counts of murder, rape, conscripting child soldiers and sexual slavery covering atrocities during the wars in Liberia and Sierra Leone in the 1990s that killed more than 250,000 people.

Prosecutors at the Special Court for Sierra Leone accused Taylor, 63, of running a “blood diamond” trade, using profits from the sale of precious stones to buy weapons and enrich himself.

The court hearings, which included testimony from supermodel Naomi Campbell about a gift of diamonds from Taylor, were delayed by the former leader’s refusal to cooperate and efforts to fight its jurisdiction. He denied all the allegations of wrongdoing.

Taylor was first indicted in 2003, along with 12 other suspects. The outcome of his case will be closely watched for legal milestones in the emerging system of international justice. Former Yugoslav President Slobodan Milosevic died during his trial before the Yugoslav war crimes tribunal.

Prosecutors called 91 witnesses to support their charges that child soldiers under Taylor’s command were sent to battle drugged with amphetamines and marijuana. The verdict against Taylor could set legal precedents in the area of child soldiers.

The tribunal, which has no death penalty, was established by Sierra Leone and the United Nations to punish those responsible for serious human rights abuses in the African nation since 1996.

It has issued 13 indictments and completed cases against eight suspects, who received sentences of up to 51 years in prison.