5 things to know after Vikings rally past Redskins 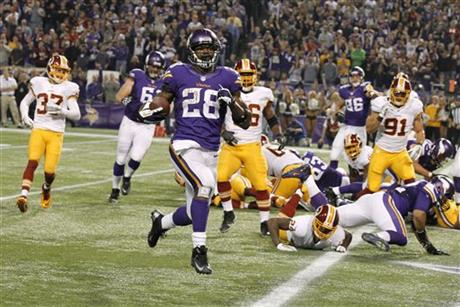 Minnesota Vikings running back Adrian Peterson (28) runs to the end zone on a 1-yard touchdown run during the second half of an NFL football game against the Washington Redskins, Thursday, Nov. 7, 2013, in Minneapolis. (AP Photo/Ann Heisenfelt)

Then he broke a rib. After sitting out a game to heal, he found himself on the bench for two more weeks. His return to the lineup didn’t yield much, other than two more defeats for the Vikings. This game Thursday against the Washington Redskins wasn’t going well, either.

So there was Ponder, sprinting toward the goal line late in the third quarter and sacrificing his body to dive for the pylon between two Redskins defenders. The original touchdown call was reversed by replay review, and Ponder walked off with a dislocated shoulder on his non-throwing left arm.

This story had a pleasant ending for the Vikings, though. Adrian Peterson scored on the next play to give them the lead for good after Matt Cassel relieved Ponder. The defense, reversing course after a rough first half, got Robert Griffin III to throw three straight incompletions from the 4 in the closing seconds to hang on for a 34-27 victory over the Redskins.

“Winning is a great feeling, Ponder said. We expect that to continue to happen. The year is far from over.

Ponder went 17 for 21 for 174 yards with two touchdowns and an interception for the Vikings (2-7), whose only other win came in London over Pittsburgh. Wearing a sling afterward, he said he expects to be ready to play Nov. 17 at Seattle. Ponder was far from perfect, but the moxie he showed in this game gave the Vikings reason to want him back by then.

When they see that tape and see that he extended his body the way he did, it’s going to increase their appreciation for who he is as a person and what he means to our team as a quarterback, coach Leslie Frazier said.

Griffin was 24 for 37 for 281 yards, three touchdowns and no turnovers, but the Redskins (3-6) blew a 27-14 lead they had early in the third quarter. Griffin also ran seven times for 44 yards, but the Vikings took him down for four sacks for 39 yards in the second half including 2½ by Kevin Williams.

This is the same record the Redskins had in 2012 before winning seven games in a row to earn the NFC East title, but their defense needs a major improvement for them to match last year’s feat.

Related:  Nice trophy, big check. But how about that tree?
Powered by Inline Related Posts

We just need it all to come together, all to click for us, and the only way to do that is to keep pushing forward, Griffin said. What’s a man to do when he goes to work every day and puts his all into it and sometimes comes up short? He still goes to work the next day, and we’ve got to do that.

Here are five things we learned about the Redskins and Vikings on Thursday night:

INCREASINGLY INJURED: The Vikings played without seven of their original starters and only had enough healthy bodies to suit up 44 players, two short of the maximum, and Ponder added to the list. He said he felt better, though, after his shoulder was popped back into place, and he was in good spirits without noticeable discomfort during his postgame interview.

LACKING POISE: The Redskins were flagged eight times for 63 yards, including three for unnecessary roughness. Two of those fouls helped fuel first-half touchdown drives for Minnesota, and one in the third quarter on Darrel Young after a punt return gave the Vikings the ball at the Washington 41 to start their march for the go-ahead score.

CLOCK MANAGEMENT: Frazier called two timeouts after the 2-minute warning while the Redskins were out of them on the final drive. Several players, most demonstratively wide receiver Greg Jennings, were visibly upset after the second one with 38 seconds left. But Frazier didn’t flinch in defending his decision afterward. He said the defense was tired, and he wanted some time left to score in case the Redskins tied the game.

WILL OF WILLIAMS: The Vikings also were raving afterward about the performance by Williams, their longtime defensive leader who had his first multi-sack performance since Oct. 18, 2009. Jared Allen had the other half-sack, and Everson Griffen had one by himself. The Vikings have 21 sacks this season.

LATE FADES: The Redskins led by 14 points midway through the third quarter at Denver before getting blown out on Oct. 27. They were ahead by 10 points late in the fourth quarter last Sunday before letting San Diego force overtime, only to escape with a win. This time, they wasted a 13-point edge and lost.

We do have to find a way to put teams away, and that’s the bottom line, Griffin said.

Connecticut backs gun controls after Newtown massacre
Smith's baseline jumper at buzzer beats Suns 99-97
Obama's quest for Iran deal set to collide with Capitol Hill
Secret Service's new rules: No boozing, racy bars
Captain Gerrard leaving Liverpool at end of season
US: Obama reassures Japan, other allies on China ahead of visit
US tells Rwanda to halt support for Congo rebels
Are Ukraine and the U.S. allies or not?

5 things to know after Vikings rally past Redskins 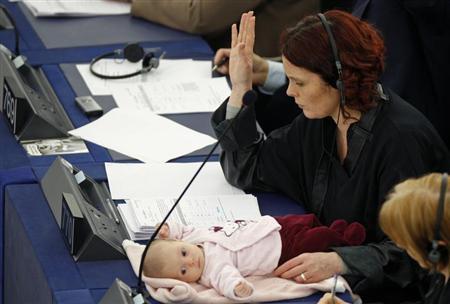 Europe Column: Why Scandinavian women make the rest of th… 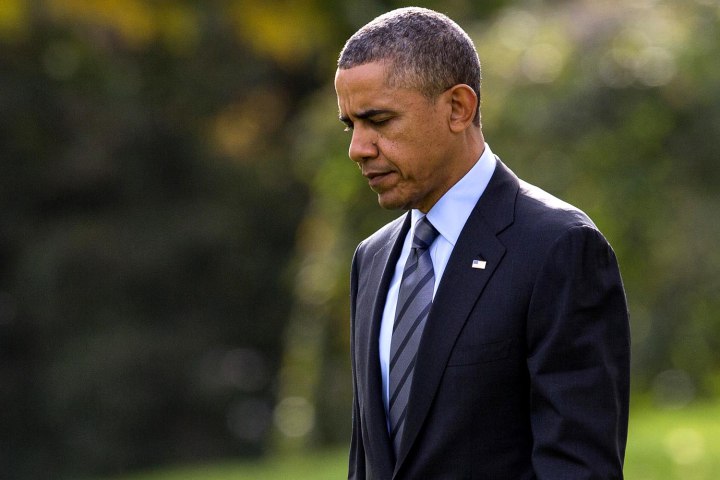