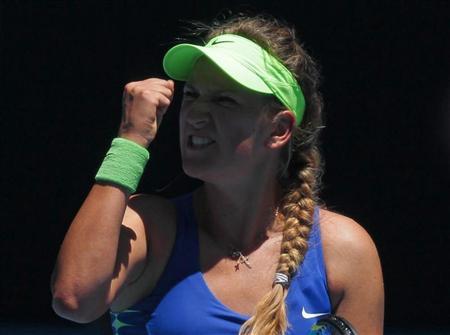 “I definitely wasn’t thinking about the streak, that’s for sure,” Azarenka told reporters of her first set humiliation that put her now 26-match winning run in jeopardy.

“She played some splendid tennis, just amazing. She was hitting every possible line there was. It felt like she clossed her eyes and just went for everything and I couldn’t really just open my eyes. I was just blinded a little,” she said.

Cibulkova, playing with bags of energy and invention, was well placed at 4-1 up in the second but despite having chances to close out the match lost the set in a tie-break.

“The turning point was 6-1 up and 5-2 up on my serve, and I just didn’t finish the match, you know. Until then, I was killing her from the return and just from the forehand,” Cibulkova said.

The Slovak was within two points of victory on five occasions in the tightly fought third set but each time Belarusian Azarenka fought back.

Azarenka will now face France’s Marion Bartoli in the quarter-finals.

Serena Williams produced 20 aces and blasted her way into the last eight with a 7-5 6-3 win over Australian Samantha Stosur.

It was not all plain sailing for Williams, who lost her first service game of the match but came back to grind out the set in the first meeting between the two players since Stosur beat the American last year’s U.S. Open final.

Down 5-2 in the second, Stosur twice saved match points and forced Williams to serve out for the match.

“I think for the most part things are working pretty decent,” said Williams, who said revenge for her defeat at Flushing Meadows had not entered her head.

Williams will face Caroline Wozniacki on Tuesday after the Dane overcame Yanina Wickmayer.

Russian Maria Sharapova also sealed a place in the quarters with a 6-4 7-6 win over compatriot Ekaterina Makarova, despite being broken four times.

Makarova fought particularly hard in the second set but eventually fell 7-3 in the tiebreak.

“She had opportunities and served for the second set but I just hung in there and stayed consistent. I played a much smarter tiebreak,” she said.

Sharapova was hampered by a worrying 11 double-faults but said she wasn’t overly concerned.

“It’s not easy to play with that but I managed to win the game in two sets, so that’s a plus,” she said.