Worry over fuel supplies has gripped the country for more than a week. Many gas stations have been forced to shut down or remain open for only a few hours. The government said premium and regular-grade gasoline is available but that drivers are hoarding over speculation that prices will rise. 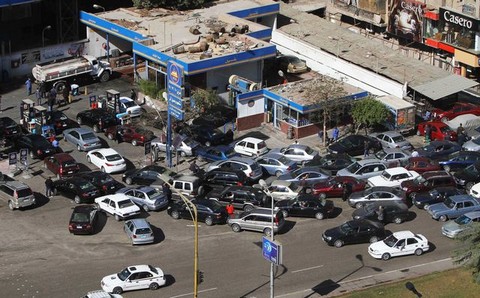 Minister of Petroleum Abdullah Ghorab told local media that more than 15,000 tons of gasoline is provided to gas stations each day, 2,000 tons more than the usual daily consumption. He said the government has no intention of raising the price of fuel, which is subsidized, and urged consumers not to panic.

But gas station managers say supplies have been cut.

Burdened with economic uncertainty amid continuing political instability since the revolution that overthrew President Hosni Mubarak last year, consumers and workers are frustrated. Truck drivers and factory workers are demonstrating for higher pay and better working conditions, and the fretting over gasoline has further frayed nerves.

“I live on the outskirts of Cairo and I can’t leave home without making sure that I will get enough fuel whenever I need it. I’ve wasted two hours of my day trying to find fuel for my car, and many others have had less luck,” said Mohamed Taema, an engineer.

Shortages also have spread to propane, used by millions of Egyptians for cooking, prompting protesters to block railways and stop trains in the governorates of Minya and Fayuom south of Cairo.

Reports of escalating shortages — and the government’s denial of a problem — have conjured conspiracy theories and anger.

“No one knows why this is happening and when it’s going to end. Does this have anything to do with the political situation one week before the first anniversary of the revolution?” said Ahmed Samir, sitting in his car outside a gas station. “This is exactly the sort of crisis that can trigger further dismay among Egyptians.”

While the ruling Supreme Council of the Armed Forces called on Egyptians to join its scheduled celebrations on the revolution’s first anniversary, a number of political groups and activists are calling for mass demonstrations against the military, dubbing the current situation the “unfinished revolution.”

Photo: Egyptians wait in their cars at a gas station in Cairo on Monday amid rumors of price increases that have led to hoarding and shortages. Credit: Ahmed Ali / Associated Press