JUBA (Reuters) – South Sudan said on Wednesday it would help its former civil war foe Sudan lobby for debt relief and the lifting of U.S. sanctions as it bid to end a damaging oil dispute with its northern neighbour. 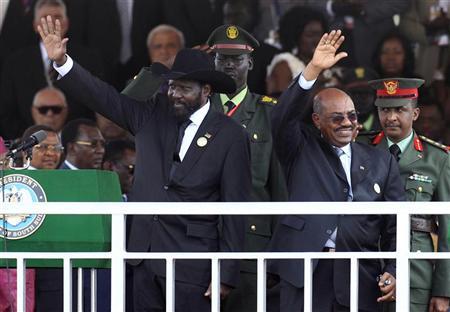 A row over how much landlocked South Sudan should pay to export its oil via Sudan has prompted Juba to shut down its entire output, putting the country’s fledgling economy under severe pressure.

In an apparent effort to curry favour with Sudan and persuade it to agree to a lower transit fee Pagan Amum, South Sudan’s chief negotiator, said his country would try to help mobilise international funding to help Sudan plug its budget deficit and contribute $2.6 billion of its own money too.

“The areas where we will join international mobilisation for Sudan (are)…to receive assistance to finance the gap that results in the loss of oil revenue from South Sudan,” Amum said after returning from the latest round of oil talks in Addis Ababa.

“The second area is in working for debt relief…the third area is the removal of U.S. sanctions on Sudan, and of course all this will contribute to creating a favourable investment environment where they would be able to seek loans,” he said.

Sudan is facing a severe economic crisis after losing two thirds of its oil when the South became independent in July under a 2005 peace deal with Khartoum.

It is struggling with high food inflation and an external debt pile of almost $40 billion. Khartoum had unilaterally seized oil from the south by way of a higher transit fee, prompting Juba to end all exports.

Sudan’s government said it welcomed the outcome of the latest round of talks as a step towards reaching “satisfying” results, state news agency SUNA said.

In a sign of a potential thaw in relations, the two countries on Tuesday gave initial approval to ensure free movement and residence of their nationals in one another’s territory, two months after Khartoum threatened to treat South Sudanese as foreigners starting in April.

The African Union say the presidents of the two countries will meet “very soon” to ink the deal and discuss a raft of other outstanding issues including how much the South should pay to use oil infrastructure in Sudan.

In November, U.S. President Barack Obama extended sanctions on Sudan for another year, saying Khartoum’s policies towards its own people had not yet improved enough to warrant their removal.

In 1997, the United States imposed sanctions restricting U.S. trade and investment with Sudan and blocking the assets of the Sudanese government.