The Warriors’ countdown to become the winningest team in NBA history is down to five. 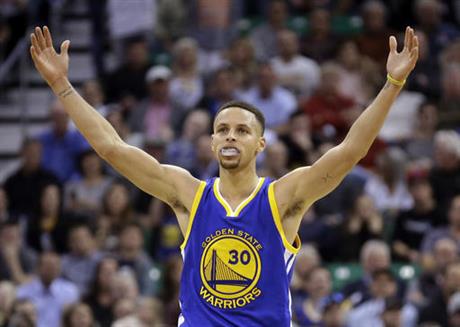 Stephen Curry scored 31 points, including six straight in overtime, and Golden State continued its historic run with a 103-96 victory over the Utah Jazz on Wednesday night.

The Warriors (68-7) surpassed last season’s victory total and must win five of their final seven games to break the 1995-96 Chicago Bulls’ record of 72-10.

They are amazing. Nothing went our way really for most of the night, Warriors coach Steve Kerr said. They kept fighting. We always compete, that is the great thing about this team. That is why we have this record and our guys compete every night.

I love our competitive spirit. No matter what our record ends up, it almost doesn’t matter. It is just an incredible display of competition and fight night after night.

Klay Thompson hit the tying 3-pointer with 15 seconds remaining in regulation after an offensive rebound and kick-out from Shaun Livingston after Thompson missed the previous attempt.

Curry took over with his burst that gave the Warriors a 99-93 lead. He then took a charge on Gordon Hayward with 1:21 left before setting up Draymond Green’s dunk on the ensuing possession to put away the game.

That is playoff-style basketball right there and to come out with a win when you play probably a C game, that says a lot about our team, Green said. (The record) is something we want to do, we’ve spoken on this. It is no secret. It will be a cool thing to do, but we have to worry about getting better each and every night. I think if we worry about that the wins will take care of themselves.

The Jazz (37-38) fell into a tie with the Houston Rockets for the No. 7 slot in the Western Conference playoff race.

Curry had seven rebounds and four assists, while Thompson finished with 18 points.

The biggest thing we can’t do is feel deflated and (have) it carry over to the next game against Minnesota.

The Jazz shot just 34.8 percent in the first half, but only trailed 42-40 at the break. The Warriors managed just 16 points in the second quarter, a season low for that period. 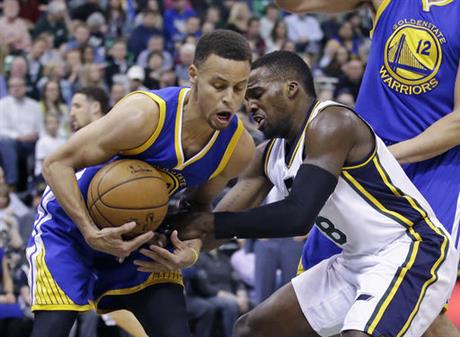 Our guys competed their (butts) off, Jazz coach Quin Snyder said. We played so hard, and played well.

Give them credit. We gave them a second shot at it and Klay Thompson knocks it down.

Warriors: The Warriors have been held to 42 or fewer points in the first half just three times in 2015-16. … Curry has hit a 3-pointer in an NBA-record 145 straight regular-season games.

Jazz: Alec Burks missed his 47th consecutive game with a fractured fibula. Snyder said they’re being conservative with his return. … Derrick Favors left the game in the third quarter with right knee soreness and did not return. He is listed as questionable for Friday’s game. … Gobert has 37 rebounds combined in the last two games.

The Jazz missed 10 of 14 free throws in the fourth quarter, leaving the door open for the Warriors’ rally.

I’ve said many times over the years that I didn’t think that (Bulls) record would be broken, and it still may not be, Kerr said. We have a tough finish still to go in the last games. To be part of both situations is unreal. It’s a pretty good stroke of fortune.

There’s a strong chance the Warriors and Jazz could face each other in the first round. Curry said Wednesday was a good warm-up for that possibility.

We know if we come back here in a couple of weeks in a playoff series, we know what the atmosphere will be like and how we need to play to win a series like that, he said. 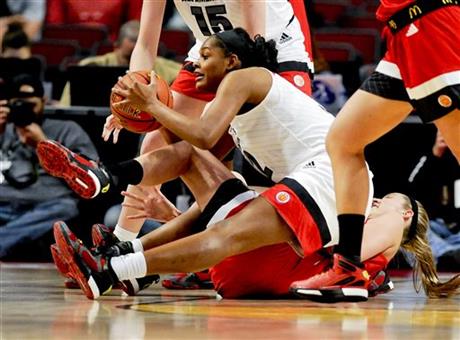 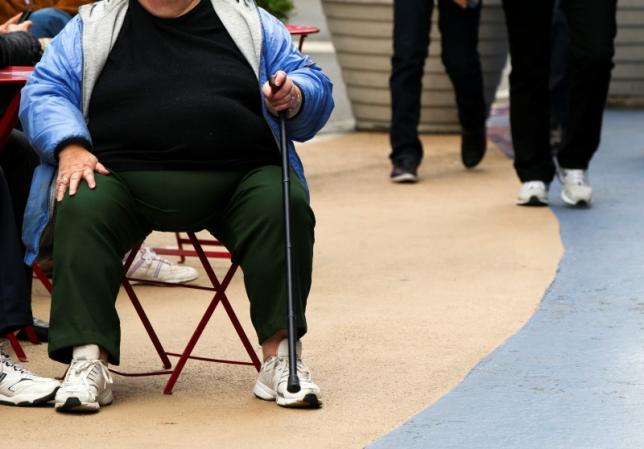