(Reuters) – Leaders battling for promotion in China’s Communist Party are using pages out of an old manual for negotiating the rungs of power, with the launch of separate probes that have tarnished the chances of one rising star and burnished those of another. 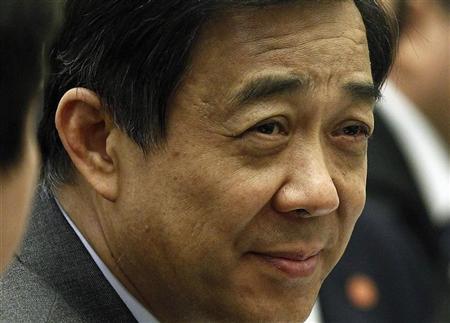 While circumstances are murky, the twin cases have rapidly exploded to upset a leadership succession that just weeks ago had been plodding along smoothly.

With the Communist Party’s 18th Congress just months away, the sudden downfall of two officials — one a right-hand man to a rising leader, the other the target of a rising general — has increased the stakes, revved up the rumormill and added a strong hint of political uncertainty to the most critical leadership transition in China in nearly a decade.

Bo Xilai, the charismatic but controversial party chief of the sprawling Chongqing municipality in western China, has fallen under a cloud with the embarrassing apparent defection attempt by his vice mayor, Wang Lijun, now under probe by the central party authorities charged with handling corruption among senior officials.

The prospects are considerably brighter for General Liu Yuan, an emerging candidate for the powerful Central Military Commission, which also will undergo a major reshuffle late this year to coincide with the broader party succession. Liu was credited with orchestrating the ouster of Lieutenant General Gu Junshan, whose downfall for apparent corruption emerged just days before the surreal Chongqing political drama began to play out.

The two cases illustrate how the official probe is the weapon of choice in Communist Party power politics. Rich with Communist jargon and methodology, a party “disciplinary inspection” is typically accompanied by a whiff of corruption and a strong dose of rumor and scandal. In China’s halls of power, it is a cudgel to settle scores and dispose of or weaken political foes.

Weakened, this time, is Bo. The “princeling” son of late Vice Premier Bo Yibo has been actively campaigning for entry to the exclusive Politburo Standing Committee at the congress due later this year, with a high profile war on crime, economic policies to boost Chongqing and a nostalgic Communist revival to win over support from the conservative old guard.

His promotion now is now far from certain.

“The waters are deep and muddy, but it looks like Bo Xilai may have reached the end,” a source with ties to the Bo family told Reuters.

“Bo Xilai is talented and bold and resolute in his work. He has lofty aspirations and wants to outdo his father,” the source said, requesting anonymity to avoid repercussions.

Whatever the answers, the jockeying for power in China is now clearly under way.

“There’s a lot we don’t know, but on the way to the 18th Party Congress it’s a rather troublesome development because it’s changing the game to some degree.”

Bo’s prospects began to unravel as Wang’s case unfolded rapidly. There was the official version — with the news of his demotion followed by him going on leave for health reasons. Then came the visit to the U.S. consulate 330 km (200 miles) east of Chongqing in Chengdu, capital of southwestern Sichuan province, and after staying overnight he left there into the arms of waiting Chinese investigators.

The official line was accompanied by a blast of unverifiable but juicy rumors on China’s microblogs, some clearly fuelled by active imagination. Wang had waved a pistol and threatened to take down Bo after his reassignment; he sought asylum at the U.S. consulate; police — one camp dispatched by Bo and another by the central government — argued over who would arrest him on the streets outside the American mission.

Rumor aside, two independent sources with knowledge of the matter said Wang was being questioned by anti-corruption investigators in Beijing. In addition to the consulate affair, one source said, the probe included his activities in Chongqing and Liaoning provinces.

Whatever the truth, the spectacle has already been damaging.

“It’s even more difficult now for Bo Xilai to enter the Politburo Standing Committee,” a second source with leadership ties said, adding the waves could upset a consensus among the leaders after Mao Zedong and Deng Xiaoping to avoid infighting that could threaten the Party’s ship of state.

“Bo Xilai also wants to get on the boat. But the biggest worry is he could sink the boat whether he makes it or not,” said the source who asked not to be identified.

In the days before Bo’s political future dimmed, another battle was unfolding in the People’s Liberation Army, this one to the benefit of General Liu, the ambitious political commissar of the Logistics Department and whose father was the late President Liu Shaoqi. Like Bo, Liu is a “princeling” son of revolutionary leaders.

During a talk to about 600 military generals before the Lunar New Year holidays in January, Liu declared war on corruption in the PLA. He did not name names at the time, but Gu was recently relieved of his duties as deputy director of the Logistics Department.

A source with ties to the PLA told Reuters Gu was under investigation for corruption, echoing media reports and microblog postings that he had been detained for economic crimes. Gu oversaw construction of barracks and other military infrastructure as director of the Bureau of Capital Construction and Barracks under the Logistics Department before he was promoted to his current post.

As in the Bo case, Internet postings flew. A common one said Zhang Musheng, a Liu confidante, late last year accused Gu of buying a plot of military-owned land in central Shanghai, selling it for a tidy profit and pocketing the difference.

This weekend, however, Gu was dropped off the organization chart of the Logistics Department on the Defence Ministry web site. The high-tech airbrushing hearkened back to the practice of wiping Communist leaders out of photos when they fell out of favor.

“This is a victory for Liu Yuan who has said he would fight corruption to the end, even if it means losing his job,” the source with ties to the PLA said.

Liu is a candidate for promotion to the decision-making military commission, which is expected to see a sharp exodus of ageing military brass. All but three generals are expected to retire, forced out by retirement age limits at the congress late this year.

The common thread in political and military cases is the hint of official malfeasance. Corruption among the leadership grew like a weed alongside China’s economic boom that started with Deng Xiaoping’s reform era. Even in 1989, the nepotism of China’s top leaders was one of the grievances of students who were demonstrating for democracy in Tiananmen Square.

Former President Jiang Zemin frequently warned that corruption in the Communist Party would bring its downfall. In practice, it often brings about the political deaths of enemies.

Jiang himself used a corruption probe in Beijing to oust and jail his rival, Chen Xitong, the former Beijing party boss. That probe netted a number of city officials after the suicide of deputy Mayor Wang Baosen.

In 2007, President Hu Jintao used a corruption case against Shanghai party chief Chen Liangyu to purge him and marginalize the remnants of the rival Shanghai gang.

Scandal does not always mean political eclipse. Other officials have survived, but they typically had a powerful defender, and a little bit of time.

Jia Qinglin had both. Tainted by a corruption scandal during his tenure as Fujian party chief in the late 1990s, Jia went on to be promoted to the Politburo Standing Committee in 2002. He is now close to completing a decade in power as the fourth highest ranked man in the Communist hierarchy, just behind Premier Wen Jiabao.

Jia’s patron was then president Jiang, with whom he worked in the Ministry of Machine Building early in his career. After the Fujian scandal, Jiang made a point of appearing in public with Jia, whom he later whisked away to serve as Beijing mayor.

Bo also has survived setbacks. He has typically been popular among the people — as Dalian mayor in the 1990s and now in Chongqing — but less so among party members, failing to garner enough support to get into even the party Central Committee in 1997.

Bo came back in 2002 when he became commerce minister and in 2007 he finally entered the Politburo as head of Chongqing.

There has been no official suggestion thus far that Bo is under investigation. Since the consulate drama, Bo was seen on television chairing a recent city party meeting, he met with visiting Canadian Prime Minister Stephen Harper and his name and photos graced the Chongqing newspapers before tapering off.

But Bo has less time, and it is unclear who his patron would be. With just half a year before the congress and his right-hand man being questioned by authorities, his political wings could be clipped.

The crisis has also added pressure on Hu just months before the leadership transition and his retirement. He is due to hand the post of party chief over to Vice President Xi Jinping, and the presidency in March 2013.

Before his political disintegration, Wang had a sterling reputation as a provider of law and order, who as the story went wore bullet proof vests because the campaign he waged had brought death threats from triads. What led him to approach U.S. officials provoked may questions.

“Cadres and the whole of China are watching how Hu deals with Bo Xilai and Wang Lijun,” a third source said.

In this fast-moving political opera, it remains to be seen if Bo has room for one more encore.