(Reuters) – Michelangelo’s Sistine Chapel ceiling frescoes turned 500 on Wednesday with the Vatican warning it may eventually limit visitors to protect one of the wonders of Western civilization. 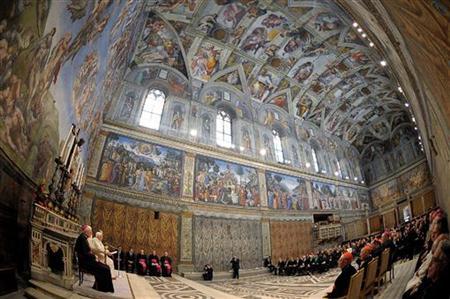 Pope Benedict XVI leads a special meeting with artists in the Sistine Chapel at the Vatican November 21, 2009. Pope Benedict meets up to 500 artists from around the world, as part of efforts to turn the page on the Vatican’s sometimes conflicted relationship with the contemporary art world. Picture taken with fish-eye lens. REUTERS/Osservatore Romano

On October 31, 1512, only 20 years after the discovery of America, Pope Julius II said an evening vespers service to inaugurate the room where Michelangelo toiled for four years, much of it on his back, to finish his ceiling frescoes.

The problem is that it sometimes feels that they have become the walk of the world. The Sistine Chapel is arguably the most visited room in the world.

With mass tourism growing, every year some five million people, as many as 20,000 a day in summer, enter the chapel and crane their necks upwards. Most are left awestruck.

The ceiling of the chapel where cardinals meet in secret conclaves to elect new the pope includes one of the most famous scenes in the history of art – the arm of a gentle bearded God reaching out to give life to Adam in the creation panel.

Earlier this month, Italian literary critic Pietro Citati sparked a storm by writing an open letter in a major Italian newspaper denouncing the behavior of crowds visiting what is technically a sacred place.

Tourists, he said, “resemble drunken herds” as they unwittingly risked damaging the frescoes with their breath, their perspiration, the dust on their shoes and their body heat.

The atmosphere, Citati wrote, was anything but contemplative as the tourists ignored the Vatican’s requests for silence, composure and a ban on taking photographs.

At a vespers service on Wednesday night to commemorate the event in the same room 500 years ago, Pope Benedict seemed to agree on the need for more contemplation when in the chapel.

“When contemplated in prayer, the Sistine Chapel is even more beautiful, more authentic. It reveals itself in all its richness,” he said.

Antonio Paolucci, the director of the Vatican Museums, said he did not foresee limiting the number of visitors “in the short and medium term” but said the museums might not have any choice after that.

“Pressure caused by humans such as dust introduced, the humidity of bodies, carbon dioxide produced by perspiration can cause unease for the visitors, and in the long run, possible damage to the paintings,” Paolucci said in an article in the Vatican newspaper.

“We might limit the access, putting a cap on the number (of visitors). We will do this if tourism grows beyond the limits of reasonable tolerance and if we are not able to respond adequately to the problem,” he said.

Under the current system, visitors to the Vatican museums can either book times to enter or wait in long queues outside, but there is no cap on the total daily number.

In 1994, at the end of a 14-year restoration project, technicians installed an elaborate system of dehumidifiers, air conditioning, filters and micro-climate controls in the chapel.

But the number of visitors has grown in the past 18 years, putting the system under stress.

Paolucci said Carrier air conditioning, a unit of United Technologies, was studying a “new, high-tech, radically innovative” project to protect the frescoes from atmospheric damage. The new equipment should be ready in a year, he said.

The director of the museums said the Sistine, where Michelangelo returned between 1535 and 1541 to paint the monumental Last Judgement panel behind the main altar, is for many a “fatal attraction, an object of desire”.

He said a way would have to be found to allow as many people as possible to satisfy their artistic yearning while at the same time defending the precious frescoes from damage. 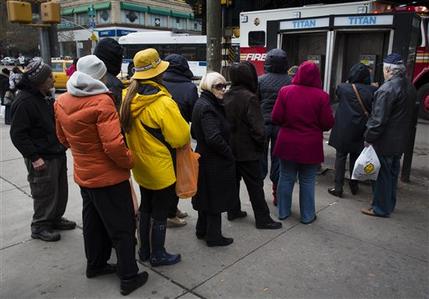 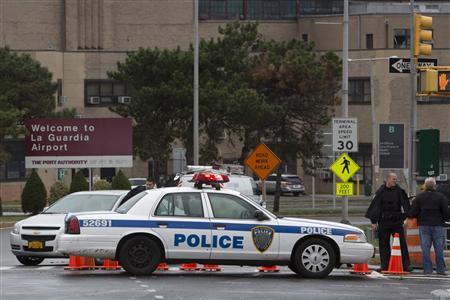